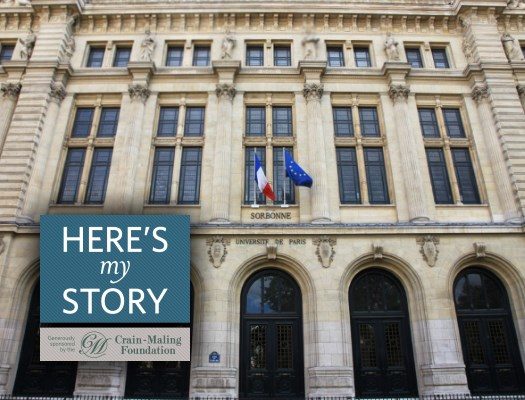 The Sorbonne University in Paris

Mrs. Rochel Leah Presman, a mother of eight, gives Torah classes in Russian and is a teacher at Ulpan Morasha in Jerusalem, where she was interviewed by JEM’s My Encounter with the Rebbe project in February of 2017.

I was born in the USSR in the decade after the Holocaust, shortly after the death of Stalin. By then, there was no day- to-day fear for the Jews of being killed or sent to death camps. By then, the fear was of being persecuted simply for practicing Judaism.

Nevertheless, largely through my grandfather’s efforts, we got a Jewish education, and we stayed loyal to Torah. In 1971, we had the opportunity to get out, and we took it. We came to Israel, where we had relatives, and settled in Kiryat Malachi. I had just finished high school in Russia, and now I enrolled in a language school to learn Hebrew, with the intent of continuing on to university.

At this time, many people were telling my father that his daughter should not be going to the university — that it was not right, not proper, for a religious girl to do this. My father was conflicted and didn’t know how to guide me. Meanwhile, I was determined to get a university education and had enrolled in a preparatory course. But also, I didn’t want to hurt my father or go against him. So, when the opportunity came to visit New York and see the Rebbe – who, I knew, had studied in universities in Paris and Berlin – I seized the chance. I was sure the Rebbe would understand me and also help me put my father’s mind at rest.

In advance of the audience, I wrote a long letter to the Rebbe in Russian, explaining my situation and pouring out my heart. And when I walked into the Rebbe’s office, my letter was lying on the table in front of him. This I remember vividly.

I had been very anxious before this meeting but, in the Rebbe’s presence, I felt calm and comfortable. He was smiling when he started to speak, using a very elegant, poetic Russian. I had only heard this before from very few people who came from aristocratic families. No one speaks like this anymore. He said, “The university in the modern Western World is not anything like the university was in Europe before World War Two. Back then, the university placed a great deal of value on pure study.

Today it’s not like that. Today, people go to university for the atmosphere and the social groups, while simply acquiring enough knowledge necessary for whatever profession will generate the most income for them.”

At this point his smile grew wider. “But from your letter, I see that is not the reason you want to go.” And, of course, he was one-hundred percent correct.

“I am sure that the university will not harm you or influence you negatively,” he continued, “but that is not the issue here. The issue is that you cannot think only about yourself but also about others. Your family has kept the Torah in Russia when it was an incredible feat…” (How he knew that, I don’t know, because I said nothing about that in my letter.) “And you must continue to serve as a role model to those Russian Jews who will soon leave the Soviet Union. Hundreds will come out, and then thousands, followed by hundreds of thousands. They will see you and think that, if a girl from a family such as yours went to university, it must be a good thing to do. But they will not have your background or your strengths, and the university will influence them negatively. It will draw them away from G-d and His Torah.”

I must say that I listened to his words with total astonishment. I knew how hard it was to get out of Russia and I couldn’t fathom hundreds of thousands of Jews being allowed to leave. Back in 1971, this was an impossible dream. In fact very few Jews even wanted to leave. Yet the Rebbe knew, even back then, that it would happen. “That said,” he went on, “there are other ways to acquire an education. You can study via a correspondence course, for example. And I see you would like to study languages – perhaps you would like to study English?” When I countered that there were many native English speakers in Israel and there would be no job for me, he responded, “Not everybody who knows a language knows how to teach that language.”

The Rebbe recommended as well that I study in a girls’ seminary in Kfar Chabad, the Lubavitch enclave in Israel. He said that although my family had kept the Torah in Russia, my knowledge of Judaism was not complete and such studies would serve me well in the future.

His words had a big impact on me. Rather than enrolling in university to study psychology, I took his advice and I enrolled in the girls’ seminary in Kfar Chabad.

I studied to be a teacher and received a teacher’s certificate. This teacher’s certificate proved to be a most valuable thing later on because, when the Rebbe’s prophecy came true and hundreds of thousands of Russian Jews streamed into Israel, I was able to help them. The Rebbe then instructed me to work for an organization called SHAMIR (Association of Religious Professionals from the USSR), which was set up to help Russian immigrants spiritually as well as physically by helping them settle in Israel. Years later I got a job as a teacher in a language school, where I taught Hebrew to Russian immigrants. Thanks to the key to success I received from the Rebbe, I was able to help them.

Yes, I was not a native Hebrew speaker. In fact, Hebrew was my third language after Yiddish and Russian. And I was living in a sea of people who were native Hebrew speakers. Some of them said to me, “What? You will teach Hebrew? You are coming with straw to a place of straw?” But, as the Rebbe said, very few people who know a language know how to teach that language. I had studied how to do it and, in the end, that served me well – there was even a waiting list of students who wanted to enter my class. I firmly believe that none of that would have been possible if I had not listened to the Rebbe’s advice because, truth be told, I didn’t want to learn in a girls’ seminary, where the students’ educational level was considerably lower than mine. I wanted to go to university and many of my friends were saying to me, “You could be a professor… what a shame that you should pass up such a chance.” So it was hard to make the decision not to go. But I followed the Rebbe’s advice ecause I trusted that he knew what was best for me and for the many people that I was able to help.