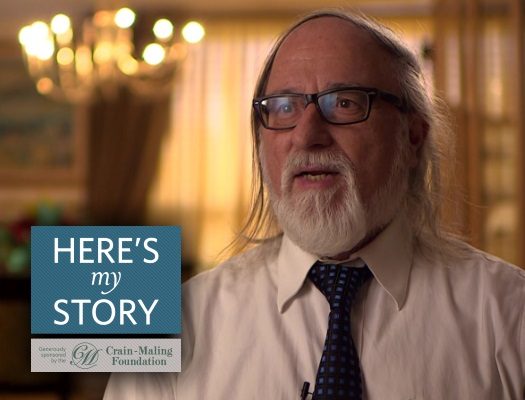 Rabbi Dr. Chaim Shine is a law professor who lectures at Shaarei Mishpat Academic Center and Netanya College. He is also a columnist for the Israel HaYom Newspaper. He was interviewed by JEM’s My Encounter with the Rebbe project in his home in Ra’anana, Israel, in January of 2014.

In the late 1970s I was living in New York, studying for my Masters in Jewish philosophy at Yeshiva University, from where I received my rabbinic ordination. At the time, my uncle, David Shine, was also living in New York while directing the North American branch of El Al. His job was to oversee all of the El Al departments in the United States, although his main focus was the New York/Tel Aviv connection.

At some point we met up, and he suggested that we go visit the Chabad Headquarters at 770 Eastern Parkway and see a Chabad gathering. My uncle was a Holocaust survivor, who was not observant in the slightest and didn’t even consider himself to be a believer in G-d. But he had many contacts in the Chabad community, due to the Chabad presence at the airport, where the chasidim sought to reach out to their fellow Jews near the El Al gates. He respected what they were doing and, whenever he had a chance, he would help them in any way he could.

Even though I didn’t have any prior associations with Chabad, I accepted his invitation and decided to go with him to see the Chabad gathering. It was when we arrived that I realized I had never seen something like it before. There were thousands of chasidim in the hall focused on the Rebbe, who sat at a large table in the middle, speaking words of Torah. My uncle didn’t come as a manager of El Al, rather he arrived as a simple person without any fanfare and, together, we blended into the large crowd.

It was a sight to behold – thousands of people crushed together, captured by the Rebbe’s personality and listening to every word that came out of his mouth. Between the Rebbe’s discourses, they would raise their cups, and the Rebbe would say l’chaim! Despite the large crowd, one could tell that every person felt as if the Rebbe was talking just to him. When we left, my uncle was very excited; he said, “You know what, let’s keep in touch and come back here another time.”

A short while later my uncle let me know that, through his Chabad friends, he had been invited to meet the Rebbe one-on-one, and he asked me if I would like to join him. Having been so impressed by what I had seen at the gathering, I readily agreed.

The audience was set for 9:00 pm. The Rebbe began the conversation in Yiddish, which my uncle spoke fluently and which I was able to follow. The main topic discussed was what El Al was most worried about – security. At issue was doing the utmost to protect the passenger’s lives, while also ensuring the airline’s success. El Al had become a favorite target for terrorists looking to hijack a plane and, to counteract this threat, El Al and the Israeli government had spent a great deal of money so that people would feel safe to fly.

I could not understand how the Rebbe, as Torah scholar, would know so much about such matters but apparently he did. He also understood the importance that El Al’s success held for the State of Israel. (Later my uncle expressed amazement at the Rebbe’s expertise and his thorough knowledge of the situation.)

After a prolonged discussion of the challenges and problems, the Rebbe declared without hesitation, “You should know that, in order for the flights to stay safe and in order for El Al to succeed – El Al must observe Shabbat.”

My uncle was surprised by this statement, “What does observing Shabbat and preventing hijackings have to do with each other?” he asked.

The Rebbe responded, “If El Al’s planes will not be in the heavens on Shabbat, then the heavens will protect their planes the rest of the week.”

Although my uncle seemed to be a bit surprised by this, I do know that it had a strong effect on him. So much so that, when a few years later there were great debates regarding whether El Al should stop flying on Shabbat, he was one of strongest proponents of the group that believed those flights should be discontinued.

Before we finished the audience my uncle asked the Rebbe for a blessing. For me it was almost unimaginable that my non-believing uncle would believe in the power of a Rebbe’s blessing, yet, apparently, he did. The Rebbe handed him a coin and blessed him, again asking that El Al should observe Shabbat.

My uncle served at his post for ten years – years which turned out to be extremely prosperous for his branch – and he always attributed that success to the Rebbe’s blessing.

Even though the main focus of the meeting was my uncle and his concerns, the Rebbe also asked me for my name and what I was doing in the US. He expressed satisfaction upon hearing that I was studying Torah and, before we left, he gave me a blessing to succeed in my studies.

The entire meeting lasted for only ten minutes, but we both left feeling inspired. The Rebbe had what I can only describe as a kind of supernatural energy. Yet I did not feel a distance from him because of his greatness, rather I felt that he was totally present with us and concentrating on every word that we said.

While working in the office of the Prime Minister of Israel, I met many important people, but I never met anyone quite like the Rebbe.