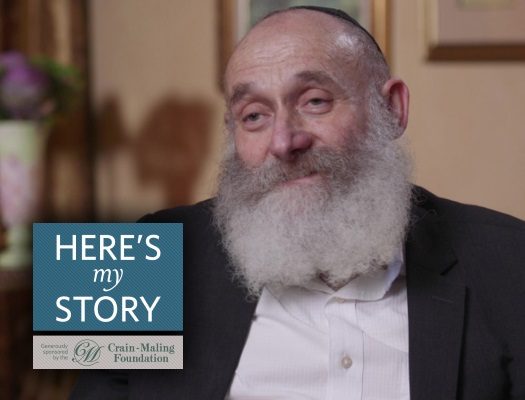 For over 37 years, Rabbi Elozor Gorelik has served as a Chabad emissary in Melbourne, Australia, where he co-directs the Chabad Jewish Russian Center. He was interviewed by JEM’s My Encounter with the Rebbe project in July of 2016.

I was born in 1946 in the city of Lvov, Ukraine. Due to its close proximity to the Polish border, Lvov became the gateway for smuggling Jews out of the Soviet Union. My father was an artist, so he would create counterfeit passports for Jews who wanted to escape to the free world via Poland. During the year I was born, he was caught and sentenced to harsh labor in the Siberian Gulag.

In 1971, when we were living in Tashkent, Uzbekistan, my brother, Shalom Ber, received an exit visa and immigrated to the United States. When he arrived, he sent the Rebbe a picture of the resting place of his father, Rabbi Levi Yitzchak Schneerson.

Rabbi Levi Yitzchak had been the rabbi of Yekatrinoslav, Ukraine, when he was arrested by the Soviets for religious activism. He was then exiled to Kazakhstan, where he passed away in 1944 in the city of Alma Ata (which is about 400 miles from Tashkent).

Later, when Shalom Ber went to visit the Chabad Headquarters in New York, the Rebbe – who never had the chance to see his father’s resting place – thanked him for the picture and asked him many questions about it: “Who is buried next to my father?”… “Is the cemetery Jewish?”… and so on.

Noticeable in the picture, which the Rebbe studied closely, was the woeful state of the headstone. It had deteriorated so badly that even some of the words were illegible. Suddenly the Rebbe said, “You told me that you still have family in the Soviet Union. Would you ask them if they could repair my father’s headstone?”

My brother agreed, and he sent us the Rebbe’s request in a letter. When we received it, it was obvious to us all that I would have to be the one to do it, as my father was too old for this kind of work. At first, I was a bit worried — I had just received my own exit visa, which had been nearly impossible to procure and, together with my parents, I was scheduled to leave in one month’s time. But if the government found out that I was involved in repairing a Jewish headstone, they could easily rescind their permission.

On the other hand, the Rebbe himself had made the request, so I was willing to risk my freedom. I began by finding a slab of marble from which to carve out a headstone. The original headstone had been made out of regular stone, since it was made during wartime when there was no marble to be found. My father helped by raising funds with which we purchased the marble.

That’s when we ran into our next dilemma. Who would engrave it? On one hand, we wanted to hire a professional, but on the other hand, we wanted it to be a G-d fearing Jew. No matter how hard we searched, we couldn’t find someone suitable for the job.

I was getting desperate and time was running out, so I wrote a letter to my cousin, Gershon Ber, who lived in New York at the time, asking him to find out from the Rebbe what we should do. As well, I also asked him to resolve yet another dilemma — what to do with the old headstone.

I anxiously awaited an answer but, alas, it never came. Meanwhile, we continued looking for an engraver and finally found, in Tashkent itself, a G-d fearing Bucharan Jew named Gavriel whose father had done this kind of work. He had learned the trade from his father but, he warned us, it would take him a while.

We stipulated that he would have to immerse himself in the mikveh every day before beginning work. We would pick him up with a taxi and bring him to our home, where we had dug a secret mikveh in our kitchen behind the cupboard. After immersing in the mikveh, he would work on the headstone.

Finally, the big day arrived when the headstone was finished, and I made the trip to Alma Ata together with Professor Herman Branover in order to erect it. During the trip I was frightened that we would be stopped by police and the headstone would be discovered. But, thank G-d, all went well, and we met up with a local Chabad resident by the name of Rabbi Yosef Neymotin, who brought along a laborer and a bag of cement. We removed the old headstone and replaced it with the new one. But we still did not know what to do with the old one. Suddenly someone came up with the idea to make a small cement enclosure around the resting place, and mix the broken pieces of the old headstone into it.

After we did that, we took a picture and made our way home. A short while later, we left the Soviet Union and made our way to New York, where we went to see the Rebbe for the very first time.

During our audience, the Rebbe presented us with three matzot, as it was close to Passover. He then said, “Thank you for the effort which you put in to preserve my father’s resting place. Although I don’t want to take away the merit which you surely received, I would like to reimburse your expenses since, as a son, I am obligated to honor my father. So please give a bill to my secretary and he will repay you.”

After the audience, we went to see the Rebbe’s secretary, Rabbi Hodakov, who reimbursed us, even taking the ruble- dollar exchange rate into account.

When we subsequently visited my cousin Gershon Ber, I asked him, “What happened to the letter which I sent you?” He replied that he had received it and had gotten a quick reply from the Rebbe which he conveyed in a letter to us. Apparently that letter had been censored by Soviet officials who read through every letter entering the USSR.

Out of curiosity, I asked him what the Rebbe had answered. He told me that the Rebbe’s answer was this: “Even though it is hard to find a headstone, it is well known what our sages say, ‘If you try hard; you will surely succeed.’ With regards to the old headstone, you should crush it into pieces and bury it around the resting place.” I was shocked to realize that we had followed his instructions even without knowing them.

After all the risk and fear which this sacred mission entailed, to receive that very special thank you from the Rebbe made it all worth it.