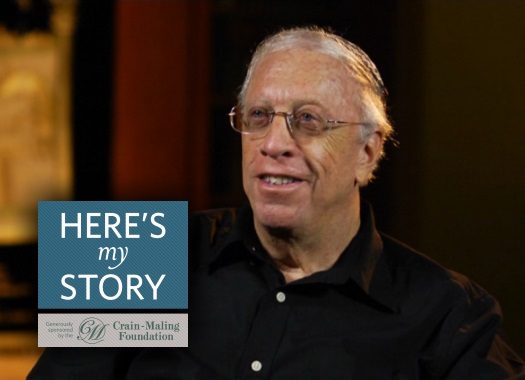 Rabbi Dr. Israel Drazin has served for over three decades as in the US Army, ending as Assistant Chief of Chaplains of the US Army, where he held the rank of Brigadier General. He authored numerous articles and 38 books on philosophy and the Bible. He was interviewed by JEM’s My Encounter with the Rebbe project in March of 2011.

My name is Israel Drazin, and I am a rabbi, biblical scholar, and a lawyer. My name is rather well-known in the military because I defended the chaplaincy of the US armed forces in court against two lawyers who claimed it was a violation of the establishment of religion clause of the US Constitution. I won and, as a result, President Ronald Reagan elevated me to the rank of brigadier general.

The story I will relate here happened in 1986, when I had the privilege of meeting the Lubavitcher Rebbe. At the time, I was living in Columbia, Maryland, and because the only Orthodox synagogue in the area was the Chabad House, I began an association with the young rabbi there – Rabbi Hillel Baron. It was he who suggested that I might like to attend a farbrengen in New York and meet the Rebbe.

So I put on my uniform and went there. During the farbrengen, one of the chasidim came over and said that the Rebbe wanted me to join him on the dais. When I came up, the Rebbe spoke to me in a mixture of English and Yiddish, which I understood. He blessed me to be “a chaplain in God’s army” and then he said something startling:

“May the Almighty bless you … to influence the gentile soldiers, as well, in fulfilling the Sheva Mitzvot Bnei Noach – the Seven Noahide Laws. Certainly the other gentile chaplains will not be upset that you are mixing into their affairs, because you will actually be helping them. And all this will help bring our righteous Mashiach.”

“I will try to do that,” I responded, but it was a non-committal statement. I was thinking to myself, “It’s absurd that the Rebbe would expect me to stand before non-Jews and speak to them about the Seven Noahide Laws.”

While I knew, of course, about that these basic commandments  for all of humanity to live by – prohibiting blasphemy, idolatry, adultery, murder, theft and cruelty to animals, and mandating the establishment of courts of law – I could not imagine myself preaching this as a general in the armed forces. As far as I was concerned, it was a “no go” right from the very beginning.

But, when I had a chance to think about it some more, I said to myself, “Those things that seem to be the most difficult in life are the very things that one should try and do.” So I decided to try and do it.

After some thought, I developed a speech, which I tried it out first on a small Christian audience – and they liked it. The biggest compliment I received was that they wanted to invite me to address the Easter service.

In my speech, among other things, I asked the question: Why is the commandment not to tear a limb from a living animal the seventh commandment? If there’s a ladder going up from the bottom to the top, this would be the final rung. Why is this so important? Why is this command the goal?

I pointed out that this is teaching us to have respect – not only for all human beings and all religions – but for animals as well. And, in fact, we should not even take one step forward without being careful not to tread on the ants on the ground.

That’s a profound thought. It is the goal of all of the commandments. If we showed respect for all living beings and all that God created, wars would cease, and the world would be at peace.

After I had given this speech many times, I thought that I should inform the Rebbe about my success – which had come as a result of his recommendation – so I wrote a letter to him. In my letter I said that, although I’m not a follower of Lubavitch but a follower of Maimonides, “nevertheless, I have followed your advice. And I want you to know that I have now spoken all over the world about the Seven Noahide Laws, and my speech has been very well received.”

I went on to enumerate the venues where I had spoken – to 30 Christian chaplains and 40 commanders in Los Angeles, to 600 Christian clergy in Atlanta, to 300 Christian clergy in Salt Lake City, to 350 Catholics who clapped at the end of the speech (a most unusual occurrence in a Catholic service), etc. I ended by saying that “I hope the Rebbe is pleased with my initial effort to comply with his request.”

He wrote back, making it a point of saying that he was also a follower of Maimonides, and that Maimonides would have surely approved of my effort since he saw the dissemination of theSeven Noahide Laws as an obligation of every Jew.

He went on: “May G-d grant that the declaration of our Sages, ‘He who has one-hundred desires two-hundred and so forth,’ be fulfilled also in connection with your said activities. Namely, that you should continue using your good influence in a manner that would be doubly effective and then doubly again, from two-hundred to four-hundred, and not merely by another increment of one-hundred.” He concluded by wishing me again “the utmost success in all my good efforts.”

He also recommended that I publicize my speech “in a suitable publication that would serve as a source, as well as an inspiration for others to disseminate these seven commandments.”

At first I dismissed the idea of publishing the speech entirely, until I received a call from Wellspring Magazine, a Chabad publication. They said that the Rebbe had told them to print what I wrote and would I please send it over. Of course, I did.

I am not mystical at all, and not Chasidic at all. I am a rationalist, a follower of Maimonides, as I wrote to the Rebbe. Yet I have read all the books the Rebbe had written, especially those in Hebrew and Yiddish, and I have a profound respect for his teachings. His immense wisdom was getting all people to recognize the importance of justice and respect for one another. As it should be.