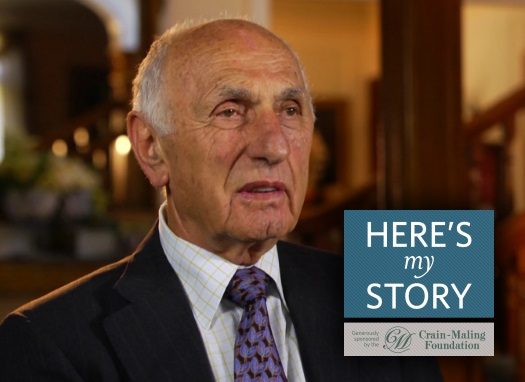 Mr. Naftali (Tuli) Deutsch, a real estate developer and philantropist, is the author of A Holocaust Survivor in the Footsteps of His Past. He was interviewed by JEM’s My Encounter with the Rebbe project in Los Angeles in September of 2011.

I come from Kimyat, a small village in the Carpathian Mountains, from a region that has been variously controlled by Czechoslovakia, Hungary, the Soviet Union and (presently) Ukraine.

In 1944, I was taken, along with my family, from Kimyat to various Nazi concentration camps, where my parents and my brothers perished. Three years after the war ended — once the State of Israel was declared — I volunteered for the Israeli Army and then worked for the Israeli Merchant Marine.

In 1956, I came to Los Angeles where I married my wife and we started a family. Although I was raised in a very religious home in Eastern Europe, I moved away from Yiddishkeit in the United States. Nonetheless, when it came time for us to send our children to school, my wife and I chose the Hillel Hebrew Academy, and we also joined Beth Jacob, an Orthodox synagogue in the area.

After a time, I befriended Rabbi Shlomo Cunin, the Rebbe’s emissary in LA, and began to help him out financially. As part of my association with Chabad — first with Rabbi Cunin and later with Rabbi Shlomo Aaron Kazarnovsky from New York — I embarked on a number of projects in the city. One of these was building a mikveh, another was building a school.

Around that time — it was in the late 1970s —– Rabbi Kazarnovsky talked me into making a visit to New York to meet the Rebbe. I took my whole family with me — my wife and my four sons.

When we went in to meet the Rebbe, I expected we would say hello, get a blessing and say good-bye. In fact, I told my driver that we’d be out in ten to fifteen minutes. But that’s not what happened. It turned out to be a very long meeting.

First of all, the Rebbe looked at me and started talking to me in Yiddish, asking me about my background and my Torah learning. He figured out right away that I was a Holocaust survivor, and he urged me to write a book about what I had witnessed. “Don’t hire somebody else to write it; that won’t be good enough. You should do it yourself, and I am sure you will do a good job,” he said.

And I did just that. I wrote the original in English and it was published under the title, A Holocaust Survivor in the Footsteps of his Past. I then sent it to Yad Vashem where it was translated into Hebrew.

Then the Rebbe asked me what I had done in Israel. During the course of that conversation, I got the impression that the Rebbe had no political opinions where Israel was concerned. However, he was adamant that all of the Holy Land belonged to the Jews, and that no one had the right to give any part of it away. He said to me that the development of the Land was a partnership of secular and religious Jews — those who would sit and learn Torah and those who would work in the fields.

While we were speaking about the secular and religious, the Rebbe suggested how one should speak about Olam Haba, the World to Come, in a way that’s meaningful to people of different backgrounds, taking into account the mindset of the audience.

So I asked him, “And how do we describe Olam Haba to a holy person, a tzaddik?” The Rebbe replied, “To him, you don’t need to say anything — he already knows.”

I also took the opportunity to ask the Rebbe another question. “Why is the Torah against art and sculptures?”

“That is not true,” the Rebbe replied. “The Torah is very much in favor of it when it is done in the proper context and for the proper purpose.”

Truth be told, I was not expecting such a complete answer and, when I went home, I checked and found that the Torah devotes pages upon pages to the instructions of how to build the Tabernacle, which was not such a big structure.

“But what did King Solomon do when he built the permanent Holy Temple in Jerusalem?” I asked. “Surely he needed more specs than just those for the Tabernacle.”

The Rebbe laughed and replied, “King Solomon was very wise, and he didn’t need more help.”

The Rebbe also pointed out that we should take the example of the construction of the Tabernacle when building any Jewish structure, such as a school. The building should have all of the necessary components to meet the needs of the student body and community. “And just as they did in the time of the Tabernacle, when they found the most skilled artisans, so too, when building a Jewish school, you need to bring in the best workers. Then the structure will be built according to the guidelines of the Torah.”

We talked a little bit more and then said good-bye. When we left, Rabbi Kazarnovsky immediately gave me a pad and paper and instructed me to write down everything the Rebbe said, so I wouldn’t forget.

But I could never forget any part of that experience. And it’s a privilege for me to relate it here because I believe the Rebbe was one of the greatest personalities that humanity produced, and I am proud to make this small contribution toward the record of his profound legacy.