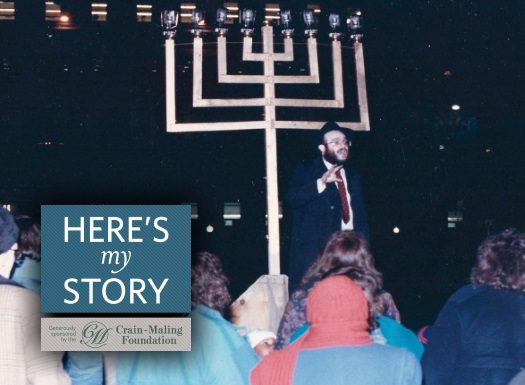 Rabbi Shlomo Kugel, together with his wife Rivka, is the director of Chabad of the West Side, Manhattan, where he has served for nearly 35 years. He was interviewed by JEM’s My Encounter with the Rebbe project in April of 2016.

I was born in Israel but my parents moved to Crown Heights when I was only four, and I had the good fortune of growing up in the Lubavitch fold, in close proximity to the Rebbe.

In 1983, my wife Rivka and I had been married for a year already and we were exploring options of becoming Chabad emissaries someplace in the world.

As a result, we set our sights on Columbia University and the Upper West Side of Manhattan. So we asked the Rebbe for his blessing and agreement. The Rebbe responded that this was a good idea, provided my wife agreed. Of course she did, and we went to work.

I started by setting up a hot dog stand at the gates of Columbia University, which was my outreach vehicle, and I also gave a class in Earl Hall on the Tanya, the seminal work by Rabbi Schneur Zalman of Liadi, the 18th century founder of the Chabad Movement. Eventually we began expanding to other programs as well.

One year, when the holiday of Purim was approaching, I copied an idea from a fellow Chabad emissary by producing a Purim flyer which advertised a UPS (United Purim Service.) The flyer proclaimed “This is the whole Megilla” across the top, and which then went on to say that many Jews heard of Magilla Gorilla but most Jews never heard of the real “Megilla.” Magilla Gorilla was a popular kids’ cartoon in the 1960s, featuring a gorilla dressed in a bow tie, shorts held up by suspenders and an undersized derby hat.

It also said that, on Purim, Jews share in joy and revelry, and among many other things, it offered two kinds of Shalach Manot gift options — a $4.95 and $6.95, one was with grape juice, one was with wine — to be delivered by a clown on the campus during the Holiday of Purim.

I printed this flyer and, because I had a custom to submit everything to the Rebbe, I sent this also, never expecting any kind of response. But, within a few days, I was amazed to get a call from the Rebbe’s secretary that the Rebbe had edited my flyer. I went to Chabad Headquarters and saw that the Rebbe had made some significant changes.

And then the Rebbe wrote: “It would be worthwhile to attach two pennies to the flyer, so that the students can also fulfill the mitzvah of giving charity on Purim.” He also recommended adding a separate paragraph to the flyer outlining all the mitzvot of Purim, to use out the opportunity that the flyer presented us.

Of course, I reformatted the flyer in accordance with his instructions, but what meant the most to me was that the Rebbe found my little flyer to be so important and took the time to read it so very carefully and to give me such detailed advice.

Truth be told it was difficult work — to leave the familiar world of Crown Heights every day, get on the subway, and re-emerge on the Upper West Side of Manhattan, which was a different world entirely.

I wanted to make the move to Manhattan and this way be able to immerse myself in the work, but I was unable to raise the necessary funds, nor did it seem to be a possibility in the future.

On previous occasions, the Rebbe directed me to my superiors at the Lubavitch Youth Organization — Tzeirei Agudat Chabad — under whose umbrella I operated. And it was to them that in the month of Elul, in the late 1980s, I submitted my resignation, it just wasn’t happening the way I had envisioned. I also wrote to the Rebbe, letting him know about it and asking for his blessing for the next chapter in my life, whatever that turned out to be.

Two weeks later, I got a call from the Rebbe’s secretary that the Rebbe had answered my letter. His response was in the form of a question: “A month before Rosh Hashanah an emissary resigns from his post where he had been spreading the wellsprings of Torah?! In the center of New York?! For reasons that are not new?!” The Rebbe inserted three question marks and three exclamation points into his short note.

Although this was obviously a reprimand of sorts, It was also clearly an affirmation. It was clear to me as sunshine that this is what I was meant to be doing — that this was my mission in life no matter the circumstances. At last I had total clarity, and in retrospect, I wish I’d had that clarity without writing to the Rebbe and going through the motions of resigning, but I was grateful to have it nonetheless.

And so I stayed at my post, eventually heading up Chabad of the West Side, a center encompassing a myriad of programs that have touched thousands of Jews. All thanks to the Rebbe.