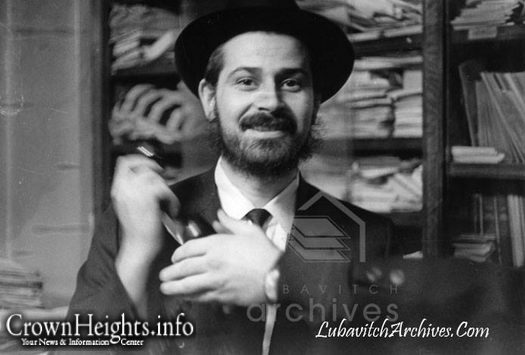 Reb Binyomin Klein in his early days as the Rebbe's secretary, circa mid 1960s.

During the onslaught against Judaism by the Soviet communist regime, Reb Simcha Goredetzky was sent by the Frierdike Rebbe to establish classes in Torah studies and teach the Bucharin Jews. When he emigrated to Eretz Yisroel he continued this Shlichus and opened up a yeshiva for the Bucharin Jews that also had emigrated and settled in Eretz Yisroel

Now in many schools and communities the administration is going to have a parent or two that complains no matter what the school does, saying my child should be dealt with in a different and more understanding manner and here was no exception. One mother always complained why the school disciplined her son for his tardiness and misdeeds.  Just leave him alone she stated firmly.

Reb Simcha patiently explained to her, the first many times your son was absent and tardy, we spoke calmly to him, he was neither punished or even threatened. We encouraged and rewarded him for the weeks he never missed a day or was late. We tried all sorts of methods, but alas, your son’s record of attendance and behavior is not acceptable, it is in his best interest that we stop him from continuing on this path, before it becomes a habitual habit that can hurt or affect his life later on.

The mother threatened, if you don’t change your conduct towards my son, then you will be sorry, I will inform on you.

Knowing that his staff was considerate and caring, he replied, every other parent will testify to the board of education that we treat all of the children excellent and are a school with compassion and care. We have and continue to bend backwards in order to accommodate your son’s actions, but sometimes you have to show there is a limit. We have boruch Hashem a large institution and I am sorry, but one student can’t be allowed to run his own program, when it interferes with the entire program.

The parent wasn’t happy and threatened again, you will yet hear from me, but Reb Simcha was not concerned. He knew his staff was excellent and conducted themselves with care and compassion towards all of the children.

Nothing happened, there was no complaint lodged with the local authorities and the mother even enrolled him for the following year.

As many chassidim do, Reb Simcha made the effort to come for part of Tishrei, in order to be able to be with the Rebbe for some of the Yomim Tovim. That year, when he entered 770, Reb Binyomin Klein, one of the Rebbe’s secretaries, called him into his office and said, I have a note for you from the Rebbe. Saying that, he picked up a note and began handing it to Reb Simcha.

Reb Simcha’s mind was racing, the Rebbe replied in full to his last letter some weeks ago, so what was this answer in response to, he wondered. Seeing the note, he was both startled and bewildered; the Rebbe wrote, “How is it possible that students are beaten in your school?!!”

For a moment he was completely baffled, as to what or which incident is the Rebbe referring to?  But then it dawned on him, the mother indeed knew how to make it hot under his collar. She must have written a letter to the Rebbe and fabricated the story.

After being informed that a letter indeed had arrived from a  member of his community, he immediately sat  down and wrote a lengthy letter to the Rebbe explaining exactly what had occurred with this child and his mother over the last half a year and wrote that to his knowledge, never had a teacher raised a hand and struck a student, nor has this mother ever indicated to him that it happened. Rather she had warned him that she would make his life difficult and this is how she plans to do so. She understood that the last thing he desired was to cause the Rebbe any pain from the actions of one of the Rebbe’s chassidim and shluchim.

After writing it up thoughtfully, he gave it to Rabbi Klein, in order to give his reply to the Rebbe and then he began walking to the place where he was lodging. It was a mere two block walk to President Street, between Kingston and Brooklyn.

While he was walking, he suddenly turned around and went back into Rabbi Klein’s office. Reb Binyomin, if you had not submitted the letter to the Rebbe, can I have it back. I have to write something else.

Something else or something more, Rabbi Klein inquired?

Something else, something new entirely, he replied.

Seeing Rabbi Klein’s surprised expression, he explained. You noticed my knee jerk reaction was to inform the Rebbe that it is one big made up story, and that is what I wrote.

However, as I was walking to my place of lodging, I began to think; Simcha, did the Rebbe ask you what happened and therefore your response was correct, or perhaps and that is the fact, the Rebbe asked, how can such behavior happen? Evidently the Rebbe feels that it happened, perhaps not in actuality, but it may have happened metaphorically.

Meaning; that the Rebbe is saying that our love and devotion to the children has to be greater than it is at present. Perhaps a reprimand even if deserved, can be considered as if the child has been hit. Is it possible that we could have accomplished more with this child in a different manner?

So I am writing the following response. You are to inform the Rebbe that I am immediately taking a return flight to Eretz Yisroel and am arranging an urgent meeting with the entire staff, to discuss ways and means, on how we can implement the Rebbe’s directive to be even gentler with our students.

This is how a chossid views an answer or statement and guidance from the Rebbe and this is the concept of the Jews saying naaseh (we shall do) before v’nishma (and we will hear). We fulfill His commandments even when we don’t understand it.

Rabbi Avtzon is a veteran Mechanech in the United Lubavitch Yeshiva Ocean Parkway, the author of numerous books and is available to farbreng in your community. He can be reached at avtzonbooks@gmail.com.