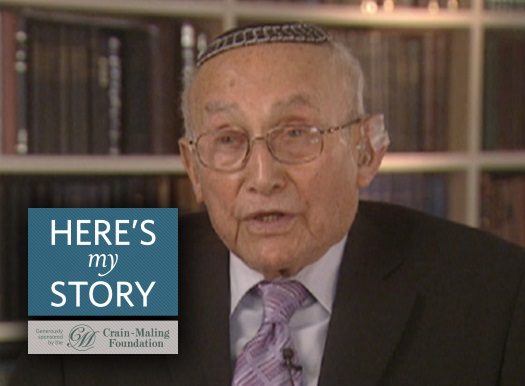 Mr. Berel (Bernard) Lax was a businessman in London, England, who worked in the textile industry for many years. He was interviewed by JEM’s My Encounter with the Rebbe project in May of 2007, and again shortly before passing away in 2010.

During the 1930s, the Previous Rebbe, Rabbi Yosef Yitzchok Schneersohn – who was then living in Poland and quite ill after his ordeals in Russia – would often visit a health clinic in Paris. And, on Shabbos, he would stay at the home of my parents, Reb Yankel and Baila Lax.

Our home was on Boulevard Saint Denis, very close to the synagogue of the diamond dealers and furriers, of which my father was one. After services, the Previous Rebbe would remain in the synagogue until the afternoon. When he would finally return, I would help him put away his prayer shawl, and I would see that it was wet with tears. He was really a holy man.

At the time I was about twenty years old, and I clearly recall the Previous Rebbe’s son-in-law, Rabbi Menachem Mendel Schneerson, who would later become the Rebbe, visiting him often in our home.

The Rebbe and his wife, Rebbetzin Chaya Mushka, were then living in a district in Paris where no Jews lived in those days. But the rents there were cheaper, much cheaper than in the center of Paris. This location suited him very well, as it was close to where he was studying mathematics and engineering, and it allowed him to make it home for Shabbat on Fridays.

Once I met him at the Sainte-Geneviève Library, where I went to translate something from Greek into French for school. This was the biggest library in Paris, located in the Latin Quarter, near all the universities. At this library they had handwritten editions of the Jerusalem Talmud, as well as the letters of Maimonides in his own handwriting. Indeed, theirs was one of the biggest collections of Judaica in Europe, which is undoubtedly why the Rebbe was there.

I sat down not far from him and began laboring over my translation, which was very hard. After a time I got fed up – what did I need this Greek for? I decided to tear out a page from the book and take it home, in order to continue at my leisure. As I started to do this, I saw the Rebbe motioning to me. He was wagging his finger in disapproval. So I stopped.

Some years later, just when my father finished the mourning period for his own father, my brother passed away. He had gone swimming with some friends and drowned. When the Previous Rebbe heard of this, he came to console my father who was naturally bereft, having lost his father and his son in such a short period of time.

The Previous Rebbe noticed that I was not home, and he asked my sister where I was. She told him that I was in Stockholm on my father’s fur business. He immediately called his son-in-law and asked him to intervene. He said, “Quick! Telephone Rabbi Zuber in Stockholm and make sure Berel doesn’t have to sit shiva in Stockholm.”

Rabbi Yisroel Zuber was the kosher butcher in Stockholm, and he got strict instructions from the Rebbe that I not be told the terrible news, and that I should be taken away from Stockholm for the duration of the mourning period, so I didn’t hear it accidentally. That night, when I came to the synagogue for prayers, Rabbi Zuber said to me, “Why don’t you come with us for a short vacation in northern Sweden – to see the aurora borealis.”

I agreed, and it was not until I came home to Paris that I learned what had happened to my brother; I then observed a brief mourning period, but the Rebbe had spared me sitting shiva alone, far away from home and family.

In 1938, the last time that the Previous Rebbe visited us, I went to the train station with my father to see him off. Everybody was on the train, including my father who sat near the Previous Rebbe in his compartment while I waited outside. The Previous Rebbe motioned for me to come to him and he said, “Although pride is normally a bad character trait, you can nevertheless be proud and never forget that you are Reb Yankel Lax’s son.” These words still ring in my ears today.

Then the future Rebbe came over. I remember that when the Previous Rebbe saw his son-in-law approaching, his face lit up. It was obvious how much he meant to him.

When the war broke out in 1939, the future Rebbe was still in Paris. After a few months, he came to see my father. “Reb Yankel,” he said, “my father-in-law wants me to come to America. I know what awaits me there, and I’m not yet ready for it.”

“How much do you need?” my father asked.

“I didn’t ask you for money!” the Rebbe declared.

My father replied, “Advice you get from your father-in-law… from me, you get help of another kind. How much do you need?” And my father ended up helping him out financially.

After the Rebbe came to America in 1941, he really tried to return my father’s money and made every effort to help him escape from France. But my father was in hiding by then, and he couldn’t be reached. As it happened, he never made it out – he was arrested and taken to Auschwitz where he died. But the rest of our family managed to survive.

In 1947, I came with my mother to visit America. I came on business and my mother came along in order to visit her sister. Naturally, we went together to see the Previous Rebbe. He was very ill at the time, and only my mother was allowed to see him. The future Rebbe was there, and he introduced her. When he heard the name Lax, the Previous Rebbe said, “I knew her husband well. He was our Reb Yankel…”

More than thirty years later, in 1980, I came to New York on business again. After my business was done, I still had a few hours free, so I asked my nephew to take me to the Chabad Headquarters in Brooklyn. I joined the evening prayers there.

After prayers were over, the Rebbe pointed to where I was sitting and said something to his secretary, who came over to me and delivered the message, “Reb Berel Lax, the Rebbe requests that you come over and say hello.”

When I went over, the Rebbe greeted me warmly. He knew that my mother had passed away, and he asked about my sisters. He remembered every name – not only the names of my sisters but of their children as well!

I was amazed by him, especially that he had recognized me immediately. The last time I saw him was in 1947, and this was 1980. My appearance had definitely changed – I was so much older – but he knew me right away!