« From Days Gone By: Chassidisher Farbrengen
Meet the Newest Bearded Chaplain in the U.S. Air Force » 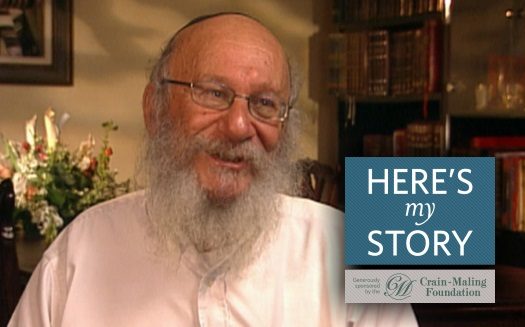 For over 50 years, Rabbi Zushe Posner has served as the Chabad emissary in Lod, Israel, where he was interviewed by JEM’s My Encounter with the Rebbe project in December of 2009.

As a youngster, I was enrolled in the Chabad yeshivah high school, which was then located at the corner of Bedford Avenue and Dean Street in Crown Heights, Brooklyn. Often, though, I came to pray in the synagogue of the Chabad Headquarters at 770 Eastern Parkway.

The Shabbat of Yud Shvat – the tenth day of the Hebrew month of Shevat of 1950 – I came to 770 with my brother Leibel, but we found the place empty. I thought maybe we were too early, so we recited psalms for a while, but I was a thirteen year old boy at the time with not much patience. When still no one came, I started to look around. I climbed the stairs to the upper floor where I found the door open.

Up there was where the Previous Rebbe and his wife, Rebbetzin Nechama Dina, lived. Going in, I saw Rabbi Shalom Ber Eichorn, who took care of their house. He told me that the Rebbe had passed away and asked me to go to Brownsville, where most of the Chabad community lived back then, and tell the men to come to 770.

As I was leaving, my brother saw me. I told him I had to go to Brownsville, but he objected: “You have to stay because today is the Yahrzeit of the Rebbe’s mother, and he will be saying the Haftarah. You have to stay for that.”

I tried to tell him that the Rebbe passed away and won’t be saying Haftarah, but he was so shocked that he almost slapped me. Then he sat down and began crying. I left him like that and went.

I brought all the chasidim from Brownsville to 770, where services were held. I remember that both the sons-in-law of the Previous Rebbe – Rabbi Shmaryahu Gurary and Rabbi Menachem Mendel Schneerson, the future Rebbe, were called up to the Torah. Some people were crying, but the Rabbi Schneerson held his composure. He was so obedient to Jewish law that he didn’t let his emotions show, because you are not allowed to cry on Shabbos.

That is just one mental picture that I have of the Rebbe – from the time when he was not yet the Rebbe.

The next morning, the funeral took place. A huge crowd had gathered in front of 770 waiting for the coffin of the Previous Rebbe to be brought out, and there were so many mourners that the police were having trouble keeping order. Thousands of people came – the entire Eastern Parkway was black.

When the funeral procession started, a lot of people who had cars were giving rides to others. There were also buses to ferry the mourners, and I saw the future Rebbe get on a bus. He didn’t hold by ceremony; he didn’t expect a limousine – he just got on the bus like the ordinary folk. That really impressed me.

I stayed in the Chabad yeshivah in Crown Heights until 1954, when I transferred out. Initially, I wanted to go to Israel – I was having trouble concentrating on my studies – but when I asked the Rebbe’s advice, he told me: “You know how the yetzer hara – the evil inclination – works, don’t you? When you go somewhere it travels with you, and the same problem can persist there as well.”

So I didn’t go to Israel but, in 1956, the Rebbe sent me on a short mission there. At that time, there had been an attack in Kfar Chabad – Arab terrorists entered the village synagogue during evening prayers and murdered five children and their teacher in cold blood. In order to lend moral and spiritual support to the Chabad community, the Rebbe sent a delegation of twelve yeshivah students to Israel as his emissaries, and I was one of those selected to go.

I remained there until 1958, when I came to the United States for my sister’s wedding. Now, most of my friends had already left Israel, but I was to return and stay for good.

Before my departure I got a telephone call from Rabbi Dovid Raskin, the head of the Chabad Youth Organization. “Since you are going to Israel as the Rebbe’s emissary, we want to arrange a farewell ceremony for you.”

I was surprised, but that evening I went to 770. There, after prayers, several of the students got together to share a few words of Torah and encouragement. After an hour or so, Rabbi Hodakov, the Rebbe’s secretary, poked his head in and said, “If everybody will stay seated, the Rebbe will be here in five minutes.” Of course, everybody stayed seated until the Rebbe came in, when we all got up – a chasid does not sit in front of the Rebbe.

When the Rebbe entered the room, he invited us to sit down, but I didn’t. “Are there no chairs here?” the Rebbe asked. So, I found a chair and rested my foot on it. Apparently that was enough to satisfy the Rebbe who began speaking.

The Rebbe urged all of the students that they should take upon themselves the mission of spreading Judaism throughout the world, and to do so happily. “There are some who view this as a burden and try to find excuses how to get out of doing it,” the Rebbe said. Then he turned to me and added, “Obviously we are not talking about the present emissary.”

I have to say that I was very relieved to hear that. I also noticed that the other students seemed to be really envious of me, and I understood them very well. If I saw the Rebbe come out and give a special talk on behalf of a specific student I would also be envious, especially since I wasn’t necessarily considered one of the better students in the yeshivah.

I went to Israel, and I have been here for more than 50 years, working with the Chabad elementary school network.

Although I was far away, my connection to the Rebbe remained as strong as ever. I remember once visiting New York for Simchat Torah. For a reason I don’t recall, I got very emotional and started crying. The Rebbe came over to me and said, “Why don’t you go out for a bit and get some fresh air.”

Two days later, the Rebbe saw my mother and asked her, “How is Zushe? He didn’t seem to be well on Simchat Torah.”

I felt then that the Rebbe was my friend. Only later did I begin to see him in a more mature way – as the world leader that he had become. He never stopped being my friend, but later I felt that I was in the presence of a king.

« From Days Gone By: Chassidisher Farbrengen
Meet the Newest Bearded Chaplain in the U.S. Air Force »