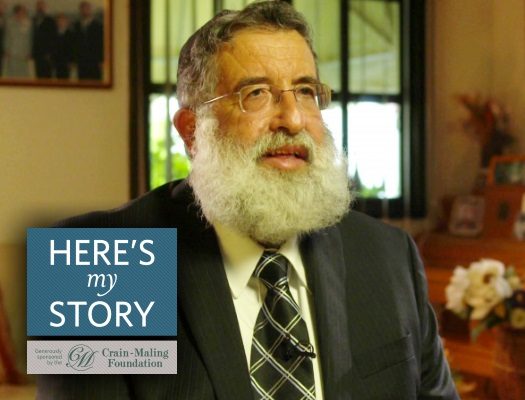 Rabbi Yisrael Haber and his wife Miriam have been serving as Chabad emissaries in the Golan Heights, Israel, for the past thirty-four years. Rabbi Haber was interviewed by JEM’s My Encounter with the Rebbe project in his home in September of 2011.

I grew up on Eastern Parkway in Crown Heights, Brooklyn, in the 1950s. Though Crown Heights is mostly Chabad-Lubavitch, my family was not – we were just “plain Orthodox.” However, due to the proximity and fame of the Rebbe, we would go see him twice a year during his public appearances.

One of those times was Simchat Torah, when we would go to see the Rebbe and his chasidim dancing with the Torah into the wee hours of the morning. The other time was on the first day of Rosh Hashanah, when he conducted the Tashlich ceremony at the pond in the Brooklyn Botanic Garden. Thousands of people would march with the Rebbe, singing their hearts out, and I recall this making a tremendous impression on me as a child.

Those were my childhood memories of the Rebbe. When I grew up, I moved away from Crown Heights. I went to university, became a psychologist and, after getting married, became a U.S. Air Force chaplain in Alaska.

In 1973, while on my way to take up my post for the first time, my wife and I drove across the country, stopping among other places in St. Paul, Minnesota. There we met two Chabad emissaries, Rabbi Moshe Feller and Rabbi Gershon Grossbaum, who upon hearing about my deployment insisted that I inform the Rebbe.

I obliged and wrote to the Rebbe about my upcoming mission. In my letter, I noted the problem of building in Alaska a mikveh – the ritual pool, without which a Jewish community cannot function. The U.S. Army had allotted the money, but I could not find anyone who knew how to build a mikveh, at least not anyone willing to come to Alaska.

When I finished writing the letter I handed it to them, and they asked me if there was anything they could do to help me. I confided my problem to them and to my shock, the younger emissary, Rabbi Grossbaum told me that he makes a living doing exactly this – designing mikvehs and overseeing their construction – and he would love to help me.

“Here I am looking all over America for someone to build me a mikveh,” I thought. “And, before they even put the stamp on the letter to the Rebbe, my problem is solved!”

In 1975, while the mikveh was being built, we came to New York for a private audience with the Rebbe. We got preferential treatment and, even the yeshivah students came out to see the rabbi from Alaska (I guess wanting to see if I looked like an Eskimo).

I was very, very nervous because I didn’t know the Chabad protocol for a meeting with the Rebbe. I had a Lubavitcher friend who was going to tell me what to do, but we were invited into the Rebbe’s office before he showed up! Going in, I had one request on my mind: a blessing for me and my wife to have children. We had been married for three years already but had not been blessed with any offspring.

I remember my knees shaking when we entered the room, but otherwise I was in a fog, so I can’t relate much of what followed. I do recall the Rebbe beginning an earnest conversation with my wife. He asked her about what it took to have the stamina to be Jewish in Alaska, and he invited her to call upon him personally whenever she experienced any problems. He also asked her to speak to the Jewish women of Alaska about the mikveh that was being built, and what it means for a Jewish woman to immerse in a mikveh. She responded – to my surprise – that she would do whatever the Rebbe asked.

When it came to me, the Rebbe asked if we distributed Jewish prayer books and copies of the Five Books of Moses. I said, “No, we don’t do that.”

Then, the Rebbe asked if we distributed Jewish educational materials so that little Jewish boys and girls of the Alaskan Range would be able to properly observe the holidays. I said, “No, we don’t do that.”

Then, the Rebbe asked if we visited the local prisons in order to connect with the Jewish inmates. I said, “No, we don’t do that.”

And then the Rebbe said, “But from now on, you’ll be doing all of this?”

Immediately a broad smile lit up the Rebbe’s face, and the only way I can describe this smile is this: it was as if I was looking at the sun rising in the middle of an Alaskan winter.

In parting, the Rebbe blessed us with these words, “May your sons grow up to be rabbis of big cities.” (And this is exactly what happened.)

When we returned home, there was a letter waiting for us addressed to Rabbi and Mrs. Yisrael Haber. The sender was Rabbi Menachem M. Schneerson, 770 Eastern Parkway, Brooklyn, New York.

We opened the letter, and both I and my wife got very emotional. It was a two-page letter congratulating us on having the merit to be the first Jews to build a mikveh in Alaska.

Shortly after that, my wife announced to me that we were going to have a special guest for Passover. I was puzzled, since Passover was months away, but that was her way of telling me that the Rebbe’s blessing had come true – she was pregnant, and the baby would be with us come Passover.

When the baby was about to be born, things got complicated, and the doctors wanted to operate. I placed a call to the Rebbe, who said, “Don’t do anything. May we hear good news.”

I told this to my wife, who responded, “We will follow the Rebbe’s advice.” We had a fight with the doctors, but we prevailed. After some tense moments of unusual activity, the baby’s vital signs returned to normal, and no special intervention was necessary. And two hours before the Rebbe’s own birthday that year, our first son, Meir Moshe, was born.

In 1978, we had a second audience with the Rebbe. At that time, we told the Rebbe that we wanted to move to Israel. After we assured the Rebbe that out replacement would carry-on the work we started in Alaska, he gave us his blessing.

Two years later, when we came to see him again, he asked us to briefly return to Alaska – “even for one hour.”

Though I didn’t understand why, I did as he asked.  During my brief visit to Anchorage, two Jewish lawyers from Philadelphia showed up. They were working with Eskimos on issues concerning the oil pipeline. One of them was in mourning for his mother and needed to say Kaddish. It turned out that I was an essential part of the quorum of ten Jewish men without which he couldn’t recite the blessing. I organized the minyan and, after we finished praying, I made sure that the group would continue gathering together even after I left. They did carry on, and this minyan has actually continued until the Chabad emissary, Rabbi Yosef Greenberg, moved there and established a permanent synagogue.

I think it’s safe to assume that this is why the Rebbe told me I needed to be in Alaska for “even for one hour.”

And only he would know.