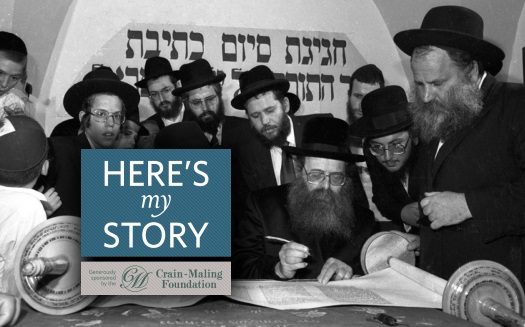 The Sadigura Rebbe completes a Torah in Kfar Chabad.

During the summer of 1980, while I was serving as the director-general of the Religious Affairs Ministry in Israel, Rabbi Avraham Shapira, who would later become a member of the Knesset, invited me to attend his son’s wedding in New York. Once there, I took the opportunity to visit the Lubavitcher Rebbe. As it happened, Rabbi Avraham Friedman, the Sadigura Rebbe, was also at the wedding and he also planned to visit the Lubavitcher Rebbe, so I, together with Rabbi Shapira, joined his entourage.

Having heard so much about the Rebbe and now preparing to meet him face to face for the first time, I felt a strong sense of apprehension. When I and the others arrived at 770 Eastern Parkway, we went directly into the Rebbe’s study and the first thing that made an impression on me were his deep and penetrating eyes – they bore deep inside me in a way that I can’t describe.

The Rebbe rose from his chair to greet us and invited us to sit in a semi-circle around his desk. The conversation that followed was conducted in Yiddish with phrases of Hebrew being interjected from time to time. The Rebbe began by inquiring about the Sadigura Rebbe’s institutions and about his plans for the future. The Sadigura Rebbe responded that most of his schools were in Bnei Brak while his synagogue was in Tel Aviv, so he was planning to move to Bnei Brak in order to be closer to his institutions.

“But if you move to Bnei Brak, what will become of the Jews of Tel Aviv?” the Rebbe asked. “If all the Rebbes move away, they will be abandoned.”

Apparently this argument touched the Sadigura Rebbe because, subsequently, he did not leave Tel Aviv – not until he reached an old age, and even then, he made a point of returning from time to time to help the community there.

Next, the Rebbe brought up the painful subject of a plan to give away swaths of the Land of Israel as part of a peace treaty with the Arabs. Our meeting was taking place a year after Israel returned the Sinai to Egypt and was considering doing the same with the West Bank. The Rebbe mentioned some of the open miracles which took place so that the Jewish people could acquire this land and how, with G-d’s help, they were victorious during the Six Day War. The Rebbe then exclaimed, “But instead of receiving this gift from G-d happily, there is now talk of giving it away!”

The Rebbe pointed out how the three main areas being demanded by the Arabs happened to be the places which, the Torah testifies, were bought with money by our forefathers – Hebron, Shechem (Nablus), and Jerusalem. “And even the non-Jews who accept the Bible believe this. President Jimmy Carter gives a Bible class, and he knows this and believes it,” the Rebbe declared. “How is it that President Anwar Sadat can refuse to relinquish even one bit of the Sinai because it is holy to his nation, but the Israeli leaders can’t say it about our land? On the contrary, they are willing to give it up. What’s more, they send a message that they are willing to bargain away parts of the Land. Why don’t they announce that Israel is ours? Just as one cannot give up on a part of one’s body, so it is impossible for a Jew to give away parts of Israel.”

The Rebbe spoke loudly, and from the depths of his heart. One could see that this matter troubled him deeply. The atmosphere was thick with emotion, and we all sat with tears in our eyes. The Rebbe beseeched us that we each use our positions – the Sadigura Rebbe as a member of several rabbinical councils in Israel, I as the director-general of the Religious Affairs Ministry, and Rabbi Shapira as a politically-involved businessman  – to do whatever was in our power to change the political outlook and fix the situation.

When we asked what would be the best way to go about it, the Rebbe said that we should encourage more building in Judea and Samaria, and that we should do whatever possible to strengthen the notion that the Land of Israel is a gift from G-d.

We then began to discuss the demographic situation in Israel. The Rebbe wanted to see a push to raise the birth rate in Israel. “Try to convince those in the government who think otherwise,” the Rebbe urged. “Make sure that they continue to give benefits to families with many children. If the government is willing to spend thousands of dollars to bring new immigrants into the country, surely they should be willing to spend that much to encourage families to have more children.”

Another topic which we spoke about was Jewish unity. “There are so many separate camps – Ashkenaz, Sephard, the Right and the Left – but the key to our future is unity,” the Rebbe said. He wanted to know what we were doing to bring the various factions together. I told him about the many activities of the Religious Affairs Ministry to further that goal. He urged us to keep on doing more, and not to be satisfied with what we had achieved thus far.

The meeting had been slated to last for half an hour. Instead, we ended up staying for over an hour and a half. The Rebbe wanted to hear every detail about the situation in Israel – whether political, military, social, economic or religious. And we could see that he already had an intimate knowledge of these matters.

When I walked out of the room, I was a different person. This meeting with the Rebbe gave me strength of purpose, and the Rebbe’s spirit and perception guided me throughout my life. The Rebbe’s demand that we fight for Israel, both in a spiritual sense and a physical sense, continues to inspire me until today.