« Shabbos at the Besht: Tzivos Hashem – in Your Home
Weekly Thought: Dream Higher » 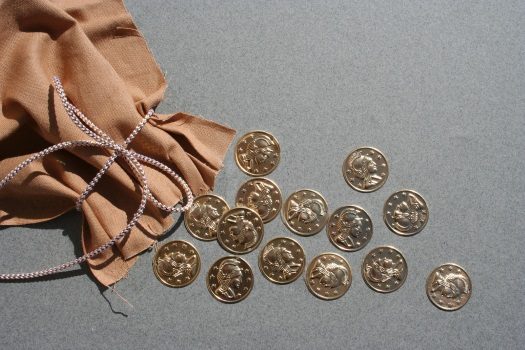 This past Shabbos I heard the following story related in the name of the noted chossid Reb Mottel Kazliner.

An extremely wealthy chossid woke up one morning and was informed that his latest venture went bust. Luckily for him no one realized that he invested in it almost all of his available fluid assets as well having borrowed heavily.  That meant that for all practical purposes he was destitute, he had lost everything.

Being a chossid he went to his Rebbe the tzaddik of Sanz.

The tzaddik Reb Chaim was known for his many contributions especially his concern for the well-being of another Jew. It is said that he wouldn’t go to sleep if he had a coin in his possession.  How could I sleep when someone is losing sleep because they need this amount.

So when this former magnate poured out his sad plight, the tzaddik was full of compassion. Picking up a pen he wrote a letter to another one of his wealthy chassidim requesting him to help this person reestablish himself.

The chossid was full of hope, optimistic that his salvation is going to happen, however that chossid lived in a distant city and he lacked even the minimum needed to cover the wagon drivers fee.

However, a few chassidim recognized his dilemma and without a fuss quickly anf quietly put together the necessary amount and gave it to him with a blessing that success should shine on him.

It was difficult for him, a person who used to support so many others to accept assistance from others but he realized he had no choice and thanked them for their sensitivity and kindness.

Even by coach the trip took a few days. Arriving at his destination he asked the first Jew he met where can he find the chossid whom the Rebbe wrote the letter to. Hearing the name the person immediately pointed towards the wealthy person’s warehouse saying he is there from morning until night.

Coming to the building he asked the secretary to allow him to see the owner. The secretary replied his appointment book is full for a few months, and it is impossible to make a change on a moment’s notice.

The chossid replied, “Please inform him the his Rebbe the heilike tzaddik of Sanz, gave me a letter to hand deliver to him. If I can’t see him, I will return immediately.”

Hearing these words the secretary asked him, “Please wait a moment, while I inform him of what you said. I am positive he desires to receive the letter from his Rebbe.”  Indeed a minute later, the owner rushed into the waiting room and warmly greeted him, ushering him into his lavish office.

The chossid then handed him the letter, which he read intently. Upon concluding reading the letter, he said, “I will definitely help you, as the Rebbe requested, just I have to make some time to discuss the entire situation with you. But in the meantime, you are my guest. You will eat dinner with me tonight and sleep in my house and we will see what to do.”

Hearing these words, the chossid was extremely thankful and relieved; his troubles are coming to an end.

That evening, when they entered the house, the chossid who himself was extremely wealthy was flabbergasted by the opulence of his host, how the butlers greeted him and asked him how he wants the dinner made. It was a regular weekday, but they served a lavish five course meal. It was something to experience.

During the meal, the host began asking about his previous successful businesses and before bentching repeated his pledge I will definitely help you, but the question is when I will have time to sit down and finalize it with you.

How about eight in the morning? suggested the chossid.

Then I am in midst of davening, and before davening one has to go to the mikva and prepare for davening. No early in the morning won’t work.

So how about ten in the morning, he asked.

I would love to, but my appointments begin shortly after nine and they continue until after six in the afternoon, no that won’t work either.

What about eight in the evening, he inquired.

Then I am by the shiur in ein Yaakov, which is followed by maariv and then I study chok L’yisroel, there really isn’t free time; but don’t worry, I will definitely take care of you.

The chossid was apprehensive but he heard the genuine concern in his hosts voice and figured, he will definitely do as he says. However, when the day went by and the following day without any discussion, he began losing hope, saying I don’t know when he would make the time available. After a third day passed without any sign of change, the chossid, quietly picked himself up and began the trip back to Sanz.

When he arrived in Sanz, he stood outside the Rebbe’s door. Upon noticing him and his facial expression, the Rebbe didn’t have to ask anything. He just said in disbelief, “Ad kidei kach – to such an extent.” He then told the chossid to take the letter to a different chossid, stating that person will most definitely help you. .

The chossid once again traveled to another city, but this time he was in for a surprise. The chossid whom the Rebbe sent him to, was an ordinary person, not wealthy by any stretch of the imagination. How can this person help me, he thought?

But as soon as the chossid read his Rebbe’s letter, he stood up and began walking out of his office. Come with me he said, and set out with a sense of urgency. He took his guest to all of his acquaintances and asked them to either participate in helping this Jew or lending him the money, stating that he is accepting all responsibilities to repay it. By the following morning, the entire amount that was necessary was raised and he gave it to the chossid and wished him hatzlacho.

Discussing it with his family, they all understood the necessity of this trip and calmed him by saying they will look after his vast enterprises while he is away.

Arriving in Sanz Friday morning, he went to the gabbai and presented to him as always an envelope full of money for the Rebbe to use and distribute as he sees. However, to his shock, the gabbai refused it saying, I don’t know you or recognize you.

Thinking that the gabbai was just exhausted from his tremendous responsibilities and in a daze, the person reminded the gabbai of the numerous times he came to his house on behalf of the Rebbe. But to his dismay and frustration, the gabbai just ignored him and began speaking with other chassidim.

The chossid reassured himself saying, when the Rebbe will see me he will instruct the gabbai to allow me to sit by the Rebbe’s tish as I have done the previous times I was visiting the Rebbe. But to his disbelief, no such invitation came.

Once again he reassured himself, it must be that the Rebbe invited others to sit at his table before he noticed me and obviously the Rebbe wouldn’t insult them by asking them to leave in order to make room for me, but I am positive that at the next meal, I will be invited.

However, he was not asked to partake in the Shabbos day meal nor by the third meal, and he began feeling that something is terribly amiss.

Motzei Shabbos, many tzaddikim had a minhag (custom) to shecht a chicken and in honor of the melaveh malka, the meal of Dovid the anointed king. He couldn’t bear missing another meal, so when he wasn’t invited to participate, he could not bear it and began pushing himself forward. The gabbbai noticed what he was doing and moved over and stood in his way, he then began berating him and said, who do you think you are? There are people here who were invited and you, a stranger, is pushing them away. Why are you more important that they?

Hearing this the person could no longer contain himself and cried out, “Rebbe ad kidei kach – Rebbe to such an extent?”

The Sanzer turned to him and said, you helped me understand a difficulty I had in chumash. In the parshas of Vayeishev and vayigash, the Torah uses the word Ish – a man. In Vayeishen Rashi says the “man”that wrestled wit Yaakov avinu was the angel of Esauv. While in Vayigash Rashi explains that the “man” was once again an angel, but this was the angel Gabriel. I always wondered how did Rashi decipher this difference from the passages?

But thanks to you I understand it. After the angel wrestled with him, Yaakov asked a simple question, please inform me what your name is? What did the angel reply, I am sorry, I am occupied, I must go and sing praise to Hashem, our Creator. So when a person is too busy to help a fellow Jew, even if it is due to his singing praise to the Creator, that my friend is the angel of Esauv.

Hoiwever, in Vayeishev, the angel saw a young Jewish man wandering in the field, he was evidently lost or unsure of what he should be doing. The angel approached him with the question, How can I be of assistance? What are looking for? And then proceeded to help him. That is the angel Gabriel.

Let us all emulate that and find the time to do a favor for another.

Rabbi Avtzon is a veteran mechanech in the United Lubavitch Yeshiva – Ocean Parkway and the author of numerous books, including the acclaimed Rebbeim Biography Series, as well as the early Chassidic Persinalities Series. He is available to farbreng in your community and can be reached at avtzonbooks@gmail.com.

« Shabbos at the Besht: Tzivos Hashem – in Your Home
Weekly Thought: Dream Higher »