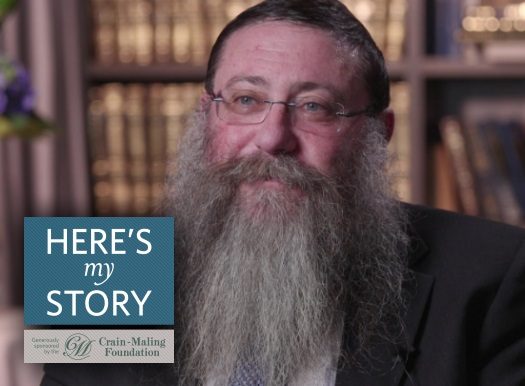 Rabbi Moshe Dovid Gutnick is one of the heads of the Rabbinical Court in Sydney, as well as a past president of the Organization of Rabbis of Australasia. He has been a Chabad emissary in Sydney since 1982, where he was interviewed by JEM’s My Encounter with the Rebbe project in July of 2016.

The story I am about to relate took place in 1987. I had just moved to Bondi, Australia, to become the rabbi of the Mizrachi Synagogue, when one of the congregants came to speak with me about choosing a Hebrew name for herself. For whatever reason her parents hadn’t given her a Hebrew name at the time of her birth. Instead, they named her Leonie, after her grandfather who was called Leo and whose Hebrew name was Aryeh Leib.

She really wanted to take the name Ariella, which made sense to her since Aryeh, her grandfather’s name, is Hebrew for lion, and Leo or Leonie is Latin for lion, and Ariella is feminine derivative of Aryeh. But she had a very conservative mindset and, to her, the name Ariella was too modern and seemed not traditional enough. She felt she should choose Rachel or Leah or something like that. I told her, “Judaism teaches that, when our parents give us names, they are blessed with Ruach HaKodesh, Divine Inspiration. Now I don’t have Ruach HaKodesh, so I can’t advise you. But the Rebbe does. If you’d like, I will write to him and ask his opinion on this issue.”

She agreed. Not only that – she wrote a letter to the Rebbe herself. In this letter she explained how she was named by her parents and why. What she didn’t say was that her personal preference was to be named Ariella.

When I read the letter, I asked her, “Why didn’t you write that you are drawn to the name Ariella? The Rebbe will be interested to know that this is the name you would really want for yourself.”

But she said she couldn’t bring herself to write that. She reasoned that this name was too modern, and the Rebbe wouldn’t be pleased with such a choice. Now it’s true that in those days Ariella might have been viewed as an unusual name for a religious woman, though it’s not so anymore.

I faxed her letter to New York and, within twenty-four hours, we had the Rebbe’s response through his secretary, Rabbi Leibel Groner: “The name Ariella is quite common now.” In other words, the Rebbe picked the name that she preferred and allayed her concerns at the same time.

Of course she was thrilled and amazed to no end (as was I ) that the Rebbe chose the name that she, in her heart of hearts, really wanted – and so very grateful that he had the foresight to address her concerns at the same time.

The second story that I would like to relate also concerns choosing a name for a woman, a new mother. This happened a couple of years later – in 1989. A friend of mine, Rabbi Pinchas Woolstone, who was at that time Director of the Jewish House in Sydney, came to me with a problem concerning a family that I did not know. The mother of this family had given birth to a son and, in order to name the baby at the circumcision, she needed a Hebrew name. That is, the baby’s name is announced at the bris as X, the son of Y, and both X and Y need to be Hebrew names. For reasons of Jewish law, the father’s name could not be used in this case.

Now, a Hebrew name for a girl or woman is given at the time of a Torah reading, which was to take place on Thursday, with the bris scheduled for the next day. The day that Pinchas came to me with this issue was Sunday.

I responded to him in the same way I did to Leonie – that is, let’s write to the Rebbe.

This we did and, as before, we sent the letter by fax on that Sunday. Monday came and went, but there was no answer. Tuesday came and went, but again there was no answer. Wednesday the same thing. Thursday was the day the woman’s father was going to have an aliyah during the Torah reading, at which time he was to give a Hebrew name to his daughter. So, they had no choice – they had to pick the name themselves.

The woman’s name was Jennifer and everyone thought that an appropriate Hebrew equivalent would be Judith – that is Yehudis. However, she decided that she wanted the name Bracha. The name Bracha had nothing in common with the name Jennifer, but she was determined that this should be her name despite everyone’s objections. And that is the name she was given.

The fax was from the Rebbe’s office and it said: “In relation to Jennifer, I suggest the name Bracha. And I want to add that each individual is entitled to choose a name for himself or herself.”

So the Rebbe suggested the name Bracha for her, which is the name that she herself had chosen, and by implication also reproved those who objected to her choice.

Two times this happened – the Rebbe had picked a name that the person had also wanted, and he gave an explanation on each occasion that pointedly addressed the situation at hand.

I clearly recall that at the time I was holding that fax I felt as if I was literally holding Ruach HaKodesh in my hands. It is a moment I will never forget.