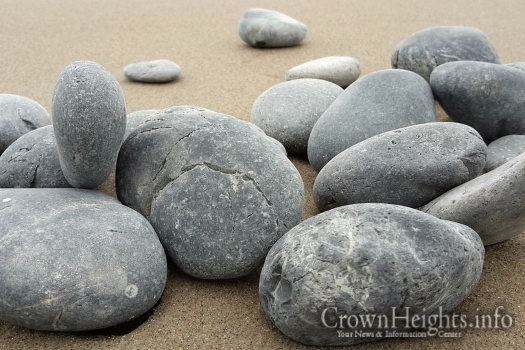 We All Have Stones, We Need a Yaakov to Unload Them

What was Yaakov doing with the stones? Why did they become one? How do we emulate this? Rabbi Avrohom Brashevitzky, Shliach to Doral, FL, shares his thoughts on this week’s Parsha – Vayeitzei.

When Yaakov arrived at the “special place” (the future site of the Beis Hamikdosh)  and decided to rest there, he took stones and placed them around his head. In the morning when he arose, it was one stone. Chazal explain, the stones “argued” amongst themselves “who will be under the head of the Tzadik”. Hashem turned them into one stone. The Kli Yakar expounds that Yaakov took twelve stones, symbolizing the Shvatim. Their “argument” was parallel to the future quest the Shevatim will have for the Beis Hamikdosh to be built in their respective part of Eretz Yisroel. The stone becoming one represents the fact that Dovid Hamelech collected an equal amount of money from each of the Shvatim to purchase the site, thus it belongs to every Shevet in an even manner.

The idea that what Yaakov did was “a sign for his children (in the future)” is reminiscent of a story about The Rebbe related by Rabbi Leibel Groner.  There was a Yid who came to The Rebbe for Yechidus on a yearly basis. It happened once that for a while he stopped. After about three years he showed up and requested an appointment for Yechidus. When he came out of The Rebbe’s room he related that The Rebbe inquired where he had been for the past several years. He replied that he reckoned since so many people come to The Rebbe with their problems and worries, he decided that at least he will make the effort to spare The Rebbe the burden of his issues.

The Rebbe replied: “In this room there’s place for every Yid! There are many “stones” here which so many Jews have unburdened from their hearts. Yidden unloaded here many heavy loads which have been weighing on their hearts – and there’s room for more “stones” of Yidden”.

The Rebbe’s room – his / our Holy of Holies had so many “stones” from all types of Yidden, with all types of problems. It wasn’t only His Chassidim who came for advice in Avodah. Many many  Yidden from all backgrounds and walks of life came to The Rebbe for advice and blessing, or just to “unload their heavy burdens from their hearts”. The Rebbe, as Nossie, had place for all the “stones”. They all came together. They all became one with / through The Rebbe. One can experience this phenomenon these days by sitting in the “tent” at The Ohel and observing the diverse crowd of Yiddem who come to Daven and pour their hearts out.

As Chassidim of The Rebbe, perhaps the lesson for us is to find room in hearts for the “stones” of our fellow Yidden. I can only speak for myself. Sometimes I find myself on Mivtzoyim eager to get The Yid to do a Mitzvah. Sometimes, the Yid just wants to talk. Many times, they have worries and life concerns which they wish to unload from their hearts. I can’t say that I’m always as patient as I should / could be to just listen to another Yid. Perhaps sometimes we get lost in our eagerness to “get the Yid to do a Mitzvah”… The Rebbe was no less eager to push every Yid to utilize every available moment to do another Mitzvah and learn Torah. Yet He found the time and space to help a fellow Yid unload his / her life’s burdens.

Make place in your mind, in your heart for a fellow Jew’s “stones”!