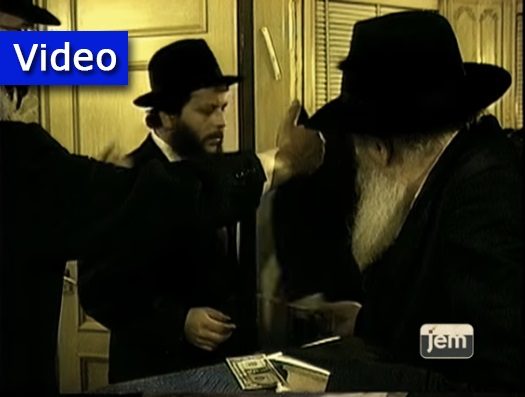 A seemingly unremarkable video of the Rebbe distributing dollars in 1988 has been spreading like wildfire on social media, after it was recently discovered what the Rebbe’s words – understood by no one at the time – were remarkably prophetic.

Exactly 28 years ago, in the Hebrew month of Kislev, of the year 5749 (1988), R’ Aron Amzalak of Sydney, Australia, was in New York. He had come for the engagement of his daughter Miriam to a young man from Venezuela, Moshe Moskowitz. (Editor’s note: The Moscowitzes have both served diligently as Chabad Emissaries to Kharkov, Ukraine, for nearly three decades, having moved there on Shlichus shortly after their wedding – while it was still a part of the USSR.)

On the day they got engaged, Wednesday, 22 Kislev, Amzalak went to inform the Rebbe of the good news. Thousands of people of all walks of life would line up to see the Rebbe, receive a blessing and a dollar to distribute to charity. In the brief moment that each person had with the Rebbe they could ask a quick question or make a short request, and the Rebbe would respond, as the line of people moved forward and the next person would have their turn.

As Amzalak comes before the Rebbe he tells him with a beaming smile, “My daughter became a Kallah (a bride) today.” The Rebbe gives him a dollar and blesses him that the wedding should take place at an auspicious time.

Amzalak continues walking and the next person in line, R’ Mendel Itkin of Los Angeles, comes before the Rebbe. But the Rebbe calls Amzalak to come back to him. He is holding another dollar that he wishes to give Amzalak in honor of his daughter’s engagement. But Amzalak does not hear this, and so there is a moment of confusion: the Rebbe is standing with dollar in hand, the line has stopped, Mendel Itkin is waiting in limbo, watching the Rebbe and trying to call Amzalak back.

Amzalak smiles and receives these additional two dollars, then moves on. At this point the Rebbe seems to laugh and say, “He doesn’t know what kest means!”

What is going on here? The Rebbe gave Amzalak four dollars, one for himself, one for his daughter, and two for his son-in-law. And a fifth dollar that the Rebbe had intended to give to Amzalak instead went to some guy from Los Angeles.

This mysterious exchange makes sense when we fast-forward 15 years. In 2003, that guy from Los Angeles, Mendel Itkin, married Amzalak’s other daughter Aviva.

So the dollar that was meant for Amzalak’s daughter went to his other daughter’s future husband, who out of the thousands of people there that day just happened to be next in line. And the extra dollar “for the groom” was because another groom was being arranged for the Amzalak family that day.

And the Rebbe laughed, because indeed, at the time nobody knew what this all meant.

But there’s more. This is all captured on video (see below). But the characters in the story knew nothing about it until two weeks ago. In yet another one of those accidents, someone stumbled upon the video on Youtube, recognized Amzalak and sent it to him. The family was amazed to see that future father-in-law and son-in-law had stood next to each other without knowing it, and the Rebbe had made the match so many years in advance.

And the timing of this discovery couldn’t have been better. Because Mendel Itkin is right now battling for his life with a terrible illness. He needs our urgent prayers. But he just received that dollar and blessing from the Rebbe all over again. And we have all received a reminder that there are no accidents.