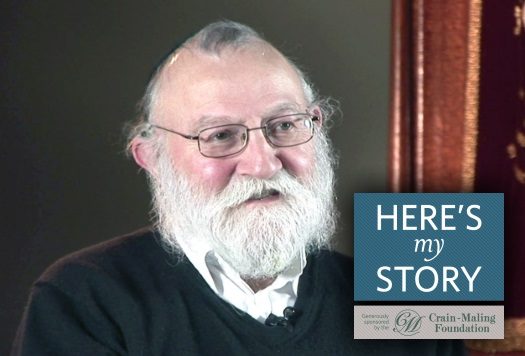 Mr. Bentzion Bernstein is a practicing lawyer in London, England, where he was interviewed by JEM’s My Encounter with the Rebbe project in February of 2010.

I was born, raised and educated in England, earning a law degree from London University. But, early on, I became disillusioned with practicing law and, in 1959, I decided to pursue a career in Jewish education instead.

About this time, I was introduced to Chabad Lubavitch, when I was invited to participate in the organization of the first Lag B’Omer children’s parade in London. This type of parade – where Jewish children publicly proclaimed their allegiance to Torah – was very successfully staged by Chabad in New York, but Jews in London, who kept a very low profile, didn’t think it would be popular here.

Despite this skepticism, Chabad pressed on with parade plans and word went out that they were seeking counselors to look after the children who would be participating. To make a long story short, I signed up and the experience was most inspiring. Nearly one-thousand children marched, openly affirming their connection to Yiddishkeit, and it was something most amazing to see.

The following year, on the urging of my new Chabad friends, I came to New York to explore the possibility of studying at the Chabad yeshivah in Crown Heights. This is when I met the Rebbe for the first time, and I have no words to describe what that was like. Suffice to say, it was very, very special.

I had not known what to say to the Rebbe or what to request of the Rebbe, so I asked advice of the mashpia – the yeshiva’s spiritual mentor – and he said, “Ask the Rebbe how you can be joyful all the time, the way a chasid is supposed to be.” The mashpia sized me up correctly; I was not a joyful sort of fellow, and I needed advice in this regard.

When I asked this question of the Rebbe, he answered me as follows: “If you keep in mind that the soul of a Jew is a part of G-d above, how can you not be constantly joyful?” Then he added, “I see that you are by nature a melancholy type of fellow, but if you bear this fact in mind at all times, you will be joyful.”

After this audience, the Rebbe looked out for me. Whenever there was a farbrengen and the Rebbe was handing out wine from his cup – what is known as Kos Shel Bracha – he would say to me “Un vos iz mit simcha? – And what’s with the joy?”

And then came the audience that changed my life, when the Rebbe told me that, instead of pursuing a career in education, I should take steps to qualify as a lawyer. The Rebbe wanted to create a “taskforce” (as he put it) of religious Jews in the sciences and professions. He explained, “I want to build up a group of Torah observant people who would be able to relate to those in the sciences and in the professions from the inside. I want these Torah observant people to be role models, to show that it’s possible to be a professional and to be committed to Yiddishkeit.”

The Rebbe knew that I had finished law school, so all I needed to do was qualify for the bar and I could start practicing … and of course, inspiring others like he wanted me to do.

I looked into what it would take to become a licensed lawyer in the United States and Canada, but it turned out that my easiest and best option lay in England. When I reported this to the Rebbe, he told me to go back home.

So, after two years studying in the Chabad yeshiva in New York, I went back to London, and I started the process leading to qualification as a solicitor – a process which was intensive and complicated. At this time, I also got married and started a family, but was not yet earning enough to take care of us all. I wrote to the Rebbe, confiding my dilemma, and he answered that he had a scholarship fund which he would make available to me. Thus the Rebbe provided me with financial support until I could start practicing law and become self-sufficient. That’s how important this goal was to him.

There were moments when it was very difficult, and I wanted to give up – especially when I was offered easy opportunities to go into business – but the Rebbe always said, “No. This is what you have to do. This is your mission in life.”

The last time I saw the Rebbe, he said to me, “You’ll be a solicitor, and you’ll be a good solicitor.” That was his blessing to me. He also gave me a bottle of vodka for l’chaim. I asked, “How did I merit to receive a whole bottle?” And he answered, “You are to share it with all the other lawyers, so that they too can say l’chaim.”

There’s one more short story, I would like to add:

The night that I left Chabad Headquarters to fulfill the mission that the Rebbe sent me on was the night of Kiddush Levanah, when we make the blessing on the moon. As part of the prayer one says to another person, “Shalom Aleichem – Peace unto you,” with the answer being “Aleichem Shalom – Unto you peace.” This is done three times. As the chasidim gathered for the blessing, the Rebbe was heard to say, “Where’s Bernstein?” People came looking for me and, when I was found, the Rebbe greeted me with “Shalom Aleichem.” I answered “Aleichem Shalom.” He then asked me to stand next to him for the duration of the Kiddush Levanah ceremony.

I was told that this was highly unusual, possibly a unique event – that someone should be asked to stand next to the Rebbe for Kiddush Levanah – and it is a memory I treasure to this day.

Why did the Rebbe single me out in this way? I think he wanted to give me a parting gift – a farewell blessing – that I should leave in peace and fulfill my life’s mission in peace. And I appreciated that very much.