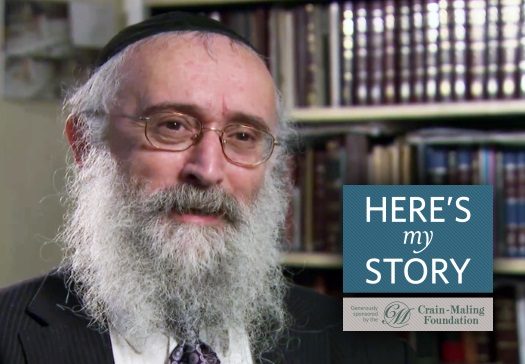 Rabbi Mordechai Tzvi Sufrin, a renowned mashpia, lecturer and educator, passed away in 2016. He taught in Lubavitch Grammar School and the Lubavitch Mechina in London, where he was interviewed by JEM’s My Encounter with the Rebbe project in August of 2011.

I was born and raised in Manchester, England. Although initially my family was not associated with Chabad Lubavitch, later in life my father became a follower of the Lubavitcher Rebbe and, when he passed away, we discovered a rich correspondence between them. All told, my father received over 80 letters from the Rebbe!

We all had the custom of writing regularly to the Rebbe. I, myself, wrote asking the Rebbe’s advice about which yeshivah to attend, what career to pursue, where to live, and so forth. And I followed whatever advice he gave me.

On the Rebbe’s advice, I pursued a career in Jewish education – first in Manchester and later (again on his advice) in London. After I married, the Rebbe advised me to take out a mortgage and buy a house. That very week, the owner of the housing development we lived in offered me a mortgage, and I saw straightaway that, if you’ve got faith in the Rebbe’s advice, you’ve got no problems. We bought a house which quickly increased in value. We were able to sell it at a profit and buy a much larger home where we are living to this day.

In 1972, my wife gave birth to our seventh child who passed away at only nine weeks of age. I wrote to the Rebbe that we wanted to come visit him for some inspiration, but the Rebbe said to wait a little while. As our three-year-old son was to have his first hair-cut, the Rebbe suggested that we start the upsherin at home in England, and he would personally finish it when we arrived.

And this is what we did. I was greatly honored when, in the middle of the Purim gathering, the Rebbe called out, “Is Sufrin here from London?” I immediately rushed over to the Rebbe who gave me a bottle of vodka, for l’chaim, and told me to share it with people while I was visiting in New York, and also with others in Paris and London. He then told me, “May you only have joyous occasions from now onward.”

I was happy to share the vodka in New York and London, but how was I to do this in Paris, I wondered. And then the Rebbe told me that Chabad’s Paris emissary was also visiting in New York and that I should share with him so he could distribute in Paris.

During the private audience with the Rebbe, he talked to us about our baby who had passed away. “Although you are frustrated because you can’t see her,” he said, “she can see you. Please remember that.” The Rebbe also said that it would be advisable for us to have more children.

After that he clipped off some of my three-year-old son’s hair, completing the upsherin, and we all left very happy. The scissors he used have since been passed around the world, and many boys have had their hair cut for the first time using those particular scissors.

Before we left, my wife asked the Rebbe’s advice if we should extend our stay in New York in order to attend the wedding of her cousin. But the Rebbe said, “No, go back as planned.”

It proved very good advice because no sooner had we landed in London than my wife fell gravely ill and had to be hospitalized. Had she remained in New York, she would have been unable to return home for several months.

Living in London, I was not able to see the Rebbe in person as often as I would have liked, but I continued to write to him on a regular basis. The Rebbe always answered. And sometimes he wrote even when I had not written to him. I remember one letter that came from the Rebbe’s secretary which read, “The Rebbe hasn’t heard from you for a long time and hopes that all is well.” Can you imagine how many people wrote to him, and yet he kept every single individual in mind. He paid attention to everyone and everything.

On one of the letters, he actually corrected the address! Can you imagine? He checked to make sure the letter was written properly and also that it was addressed properly. Nothing escaped his notice.

I saved all his letters and I have 140 of them. I got started writing a lot earlier than my father, so I have more, but it boggles the mind how many letters the Rebbe must have written over his lifetime. If only one thousand people received 140 letters like me, that makes for 140,000 letters, which is a gross underestimate I am sure. The actual number must be beyond belief.

But that’s how much the Rebbe cared about every Jew. I remember that in one audience I asked for a piece of lekach – the honey cake that the Rebbe handed out during the High Holidays – on behalf of a friend in London by the name of Nosson Vogel. “Which Nosson Vogel?” the Rebbe responded, “the one who sells jewelry or the one who sells stationary? Because one of them has already received lekach.”

“The one who sells jewelry,” I managed to reply.

The Rebbe smiled and handed me another piece of lekach.

I was just astounded. How did the Rebbe keep track of everyone? But he did. To him every person was an individual, a Jewish soul in need of his fullest attention.

Whenever I visited him, as I was leaving, he always blessed me for a safe journey home and gave me a dollar for charity, making me his messenger in the performance of a mitzvah. After he passed away, I came to pray at the Ohel, his resting place at the Montefiore Cemetery. When leaving, I took a taxi to the airport, and the driver gave me a dollar bill in change. I looked – written on the bill in Hebrew were the words: “Received from the Lubavitcher Rebbe.” Obviously, someone had received this bill from the Rebbe a long time ago, and probably accidentally used it to pay the taxi driver. I was thrilled! It was as if the Rebbe himself had given it to me, making me his messenger again, and guaranteeing my safe trip home.

I kept that dollar bill, framed it in glass and hung it on the wall of my home. I felt it was a sign that the Rebbe was still looking after me from above, as he had done down below during his lifetime in this world.