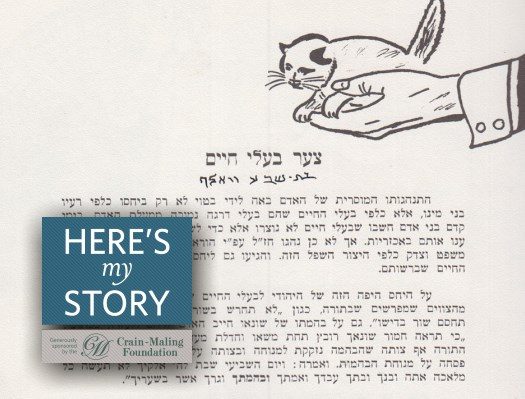 Mrs. Shavi Slodowitz was a High School Hebrew Studies teacher, Head of Tannach Department, teacher of VCE Text & Tradions and Religion & Society, for over 30 years at Yavneh College in Melbourne, Australia. Today she is part of a new start up business “PetHomeStay.com” She was interviewed by JEM’s My Encounter with the Rebbe project in Melbourne, Australia, in July of 2016.

When I was still a young girl, my family emigrated from Germany to the United States, settling in Brownsville, 1950 New York. I was a pretty tough kid, and I was expelled from my school in the middle of the year. My mother could not find another school that would accept me in the middle of a school year, until she came upon a small, new school in Brownsville named Bais Rivkah, the official Chabad girls’ school at the time. There were a few classrooms is a small house and I remember some classes being held in what smelled to me like a fish shop. Later Bais Rivkah moved to 400 Stone Ave. We stayed in that new building right through Seminary.

From the minute I walked in the door, I was happy. Rabbi Shloma Majesky and Rabbi Yitzchok Goldin, as well as several other teachers, really took an interest in me and made sure that I was doing well, even though I was far from the best student. Each year my mother asked the Rebbe if she should move me to Bais Yaakov or Esther Shoenfeld, the more established girl’s schools at that time. Each year the Rebbe answered her, “if she is happy leave her in Bais Rivkah”.

My mother had a deep respect for chasidic rabbis dating back to her years in Poland before the war, and she made sure to give me opportunities to develop a special connection to the Lubavitcher Rebbe, whom she visited frequently. Whenever she faced a difficult issue, she went to see the Rebbe, and if I was the concern of the moment, I would be dragged along.

The first time I was brought to the Rebbe, in 1959, I was about twelve years old. At first, I was frightened to be in his presence and did not know what to say, but I came to respect the brilliance and simplicity of his answers, which eventually left the greatest impression on me. This is how the Rebbe managed to shape my life in many ways.

One of the most impactful meetings took place, around 1965, before the New York Regents Exams when I was in 12th grade. I was interested in none of the subjects that were required Regent exams, least of all history. To make matters worse, the preparatory text was a huge book which I had not read nor ever wanted to read. I had resigned myself to failure. My mother, of course, would have none of that, so off we went to the Rebbe’s office at 770 Eastern Parkway.

The Rebbe’s response, after I explained myself to him, was simple: “Don’t worry about finishing the whole textbook. Just take one paragraph at a time. When you finish one, move onto the next.”

I followed his advice, and although I would never manage to finish the book, I developed a strong interest in history. Somehow, thanks to the Rebbe’s advice, I managed to pass my Regents. In my educational career History always became the focal point of my teaching, no matter what the subject was. I believe you can’t properly understand Tanach, Talmud, chasidut, Halacha or any secular subject without having proper knowledge of the history behind it and of how it developed.

There’s another story which I would like to relate.

One Friday, when I was walking down Kingston Avenue, I heard a strange sound nearby. I looked for the source of the noise, and found a stray kitten crying.  I was always obsessed with animals and would constantly bring home strays, which would drive my parents absolutely crazy. So I scooped this kitten up, carefully cradled it in my hands, and continued walking home.

All of a sudden, I looked up and saw the Rebbe walking up Kingston Avenue, on his way to visit his mother, which he did every Friday. I had no idea where to hide. Should I cross the street? Should I duck into a shop? While my mind was racing, I pretty much froze, and the Rebbe spotted me. He came towards me, stopped, looked at me and the kitten, and then his face broke out in a huge smile and he wished me Gut Shabbos.

I was in heaven. I ran home and told my mother that, no matter what happened, I was going to care for this kitten. I felt that my feelings for animals had been legitimized by the Rebbe’s response.

But it didn’t end there. A few years later, when we were publishing our high school yearbook, our principal, Rabbi Majesky, wanted each of us to write an article in Hebrew. My initial response was, “I can’t write in English, let alone Hebrew!” So I refused. He wouldn’t take no for an answer and offered me all kinds of incentives, but I was a very stubborn girl and held my ground.

The next time I was in a private audience with the Rebbe, he asked me how school was going, and I mentioned this conflict to him. The Rebbe remarked, “There must be some subject that you care deeply about and would want to make the effort to write about.

“What I have strong feelings about, are animals,” I replied.

“Then why don’t you write about tzar ba’alei chayim, the Torah’s commandment not to be cruel to animals,” he suggested.

That triggered something within me and sure enough, with the help of my Israeli neighbor, I wrote an article about all the instances that the Torah stresses the importance of being kind to animals. During my research, I discovered that the Torah not only prohibits causing them pain, but also instructs that they be treated with care and respect – we are even commanded to feed our animals before eating ourselves.

Before the yearbook went to print, one of my classmates, Faige Shusterman, who was the school artist, drew pictures relating to each article. And to my shock, she illustrated my article with a drawing of two hands holding a small kitten. I had never told her about my chance meeting with the Rebbe on Kingston Avenue, yet for some reason that was the picture she chose to draw.

To me, this connected my experience with the Rebbe and his encouragement to continue to care for all of G-d’s creatures. I have worked for the RSPCA and was a parrot breeder for many years. Now that I have retired from education, I spend my time caring for other people’s animals and educating people how animals can help disabled children and the elderly as a very effective form of therapy.  I fulfill the mitzvah daily of feeding my animals first thing in the morning before my first cup of coffee.

Looking back, I have to say that the Rebbe definitely raised my self-esteem and self-awareness, and shaped my unusual life and the way I perceive things. He had an amazing ability to motivate me – just as he has motivated many people – and encourage me to do things I never thought I was capable of, or even wanted to do. Being able to tap into each individual’s uniqueness, advise and guide them accordingly is what made the Rebbe so great. To have had the privilege to be one of those individuals is what I will always be grateful for.