« Weekly Living Torah Video: Despite Our Differences
Over 1,200 Jewish College Students in New York for Conference » 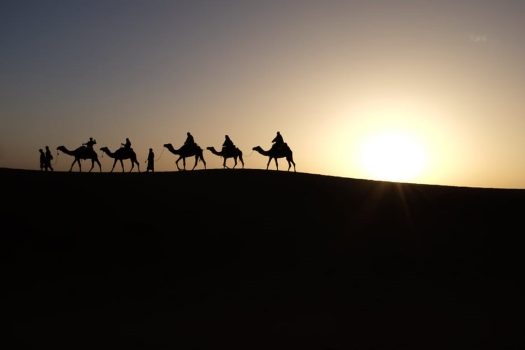 Was Avraham Avinu the only famous Jewish leader who left home to pursue Hashem? Does one absolutely need to travel away from home in order to succeed in learning? Rabbi Avrohom Brashevitzky, Shliach to Doral, FL, shares his thoughts on this week’s Parsha – Lech Lecha.

The story of the first Yid begins with Hashem instructing him to go, to leave home and go to another destination. Hashem promises him that through doing this he will grow to greater spiritual heights. Indeed, in order for Avram to attain the ultimate greatness and reach his full potential, he had to leave the comfort of his birthplace and what was familiar to him.  To pursue Kedusha he needed to endure the slight discomfort of the unfamiliar and go to where the source (of Kedusha) was.

Over many generations young Jewish men followed this example. Many young “Avrahams” left home, some in their early teens, to pursue Torah and Yiras Shomayim. Some of the famous Chassidim of the past generation arrived in Tomchei Temimim in Lubavitch at a very close age to their Bar Mitzva. Many remained in Lubavitch for several years without seeing their parents. As some of these Bochurim arrived home unexpectedly, after an absence of so many years, they were barely recognized by their own parents!

Certainly times have changed. These days most of us get to hear from our children who are studying away from home, perhaps on a daily basis. Between email, cell phones and Facetime (depending on the institution your child is in), it almost doesn’t feel like their actually far away from home. Sometimes it seems like they just went out to the mall for just a few hours… This of course doesn’t mean that every single child or situation is the same. Some students can perhaps benefit more by staying home, while others need to go away in order to fully immerse themselves in the environment of Torah learning.

The point of this Parsha thought is not to dictate whether one must leave home or not, in order to succeed in learning. Rather, it’s to make the point and bring out the value of “Hevei Goleh Limkom Torah”. The Rebbe was (overall) in favor of this idea and encouraged strongly the idea of going to learn “B’mokom She’libo Chafetz” – where one’s heart desires; where one will be happy, thus more likely successful. The following Rebbe story can help illustrate this point. This is a unique and rare story in which The Rebbe shed a glimpse into his childhood and upbringing.

Rabbi Efrayim Shteinmetz of Caracas related: In 1961 my wife and I were facing a dilemma. We were expecting our fourth child and my wife was having difficulties with the fact that we were living still in Venezuela, which at the time was not such an easy thing for one who grew up in a very Frum community, namely in Chicago. Considering that there were almost zero options available for the Chinuch of our children, my wife was adamant to return to the United States. I insisted that we must first consult The Rebbe on such a matter, as I have been in touch with Him all throughout all the years.

In Yechidus, after hearing our question, The Rebbe responded: “Certainly you are well aware that I’m against anyone leaving a jewish community in general, particularly when one is in position of strengthening Yiddishkiet in those communities!” My wife said to The Rebbe that our oldest is already seven years old and there’s no Cheder or any proper Jewish institution for his Chinuch. The Rebbe said to her “I want to tell you a story. When I was a young child of 5-6 years old my father said to my mother that “Mendele needs to leave the city”. My mother argued “How can we send him away, he’s such a young child?” But my father was insistent “he can not stay here and must leave to study out of town”. Indeed my father sent me to study in another city. I boarded there and every morning I’d wake at 5:30, take the lantern and go to the Yeshiva to study there at a time when it was still dark outside”. The Rebbe concluded with the following: “The fact that my father sent me away while I was still a young child – to study in Yeshiva away from home, did not affect me negatively in any way…”

Then The Rebbe told us to stay in Venezuela and suggested we start our own Cheder. Then He asked us where we live and before we had a chance to answer he took out a piece of paper from his draw, gave me a pen and asked me to draw a map of Caracas. I did so and pointed out to The Rebbe the various Jewish communities. The Rebbe pointed to the east side of the city and asked if any Jews live there. I responded that there are only several Jewish families in that part of the city. “That’s where you need to live! It needs to be established as a place of Yiddishkiet.”

Amazingly The Rebbe saw in to the distance. At the time most Jews lived in the western side of the city. Many reacted to my desire to “set up shop” in that part of the city as if I went out of my mind. Not too long after, most of the Jews moved to that part of the city… Today this is the center of the community!

You draw the conclusion.

« Weekly Living Torah Video: Despite Our Differences
Over 1,200 Jewish College Students in New York for Conference »