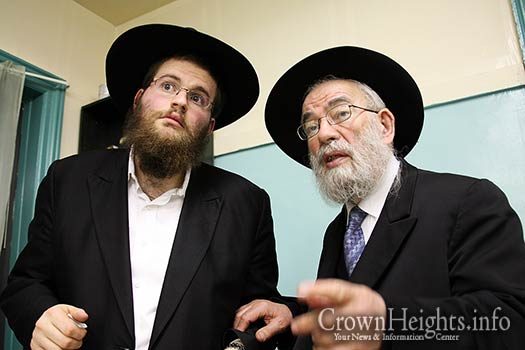 Rabbi Chaim Bruk (L), Shliach in Bozeman Montana with Rabbi Shimon Goldman OBM, his grandfather, at a Melava Malka for the Gmach he ran.

Rabbi Chaim Bruk, Director of Chabad-Lubavitch of Montana, reflects upon the recent passing of his grandfather and personal hero, Rabbi Shimon Goldman, OBM.

Early Monday morning, just a few hours before departing to Israel, I had the somber honor of escorting my beloved Zayde, Rabbi Shimon Goldman OBM, as he was sent off from Maimonides hospital in Brooklyn for burial preparation. My Zayde was my Chevrusa (study partner), my inspiration, my guide, my friend, my storyteller, and more than anything, he was my hero.

He was my personal Noah.

In this week’s Torah portion, Noach, we read about the survivors of the great flood. Noah watched a morally failing world suffer destruction. When all seemed lost, one man, Noah, rose to the occasion, built an ark haven and when the flood waters receded, created a bright future for us all.

My Zayde lost his parents and six siblings during our modern day flood, the unthinkable holocaust.

He was left alone in a dark world where he saw all that was wrong with humanity. Nevertheless, he remained unfazed and reaffirmed his unshakable faith in G-d every day of his ninety one years on earth. His infinite love for and his family, children, grandchildren and great grandchildren, was legendary. His business ethic as a butcher and his devotion to giving interest-free loans, day or night, is who he was; kind, generous and honest.

Standing at my Zayde’s side, just moments after his passing, my brother Yanky quipped “it’s the first time in almost eighty years that he’s reunited with his family”. I know, without a shadow of doubt, that this Shabbos, Zayde will be sitting around the heavenly Shabbos table with his parents Shmuel Zanvil and Menucha Kraindel, his siblings Chana, Leah, Tzvi Hirsh, Chaim, Yaakov and Yosef, his beloved bride of sixty five years, my Bubbe Esther and his beloved daughter, my mom, Chanchy, the apple of his eye. It will be Shabbos to remember in the Garden of Eden.

My dear Zayde, my Noah, thanks for never giving up on life and sharing it with me and your entire family!

May G-d guard our brethren in Israel and the world over from harm and send us Moshiach speedily. May He protect the armed forces of Israel and the United States wherever they may be. Shabbat Shalom! Chazak!!! L’Chaim!!!