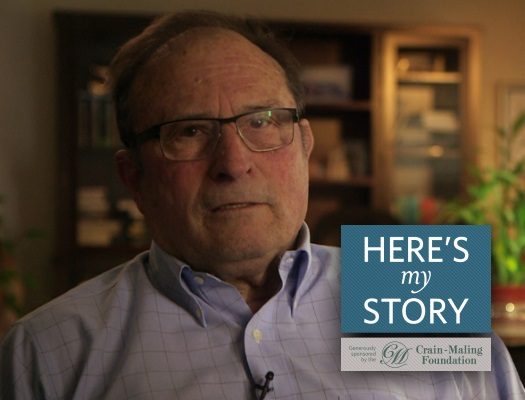 Dr. Mordechai Shani served as the director of the Sheba Medical Center for 33 years. He received the Israel Prize in 2009. Presently he is Professor of Healthcare Systems at Tel Aviv University. He was interviewed by JEM’s My Encounter with the Rebbe project in Tel Hashomer Hospital in March of 2013.

My ancestors were Chassidic Jews from Poland who immigrated to Israel where I was born and educated. I studied in religious as well as in secular schools, and graduated from Hadassah Medical School of Hebrew University in 1966.

After the death of Professor Chaim Sheba, with whom I worked for a number of years, I became the director of the Sheba Medical Center at Tel HaShomer Hospital, the largest hospital in Israel with 1,700 beds, 7,000 employees and an annual budget of $600 million a year. In my capacity as director I came to the United States periodically, and on one such occasion in 1976, a friend invited me to a farbrengen.

This proved quite an experience. It was Simchat Torah, and the farbrengen was attended by several thousand Chassidim, who were dancing and joyously celebrating the holiday. But when the Rebbe walked in, everyone stood still – you could hear a pin drop. The awe and reverence with which those present held the Rebbe was palable.

At some point during the night, I was introduced to the Rebbe, and he asked me why, in Israel, we called a hospital a beit holim, meaning “house of the sick.” He expressed the opinion that it should be called beit refuah“house of healing.” He then invited me for a discussion on the subject after the holiday.

This was arranged. The meeting proved very friendly. It wan’t a formal dialogue, rather a give-and-take between two people coming from different worlds and holding sometimes similar, sometimes contrasting points of view. The conversation was conducted in a mixture of languages – in Yiddish, which I spoke a little thanks to my grandmother, in English, but mostly in Hebrew.

In his remarks, I recall that the Rebbe put an emphasis on the soul as the source of a human being’s strength. He said that the stronger a person’s connection is to his soul, the better he can cope with life. And he pointed out that the function of the mitzvah of visiting the sick is to help the sick person strengthen that connection to his soul.

The Rebbe also voiced an opinion that every person has the responsibility to take care of their own health. Yes, doctors have a role to play, but the primary responsibility lies with the individual  Give a person the best doctor in the world, but someone who does not take care of himself, does not eat well, sleep enough or exercise enough will impair his health.

Today, there is a push in medicine toward “patient empowerment,” where we try to convince people that they must take responsibility for their health and not just rely on doctors. The Rebbe was speaking to me about this thirty years ago! It is interesting that, so many years ago, the Rebbe held was advocating this approach back then,  when no one was thinking about the issue. Today it may seem obvious, but it has only become a basic rule of medical thinking in more recent years – that preventive medicine requires the individual to take responsibility. The doctor can help, but he cannot replace the patient’s own effort.

Another issue which we discussed was the place of technology in medicine. At that time, at the dawning of the age of the personal computer, technology was not yet a central nor dominant component of the medical world. The problems related to technology in medicine would not become apparent for years to come. But, here too, the Rebbe was forward-thinking. He said to me, “It is up to you, the doctors, to determine the outcome; whether this technology will be used for the benefit of the people.”

He expressed the worry that technology might distance the doctor from the patient: “At the end of the day,” he explained, “the emotional support of the doctor, the human being, is most important, and while technology can be a very helpful tool, it cannot become a replacement for listening and caring.”

Unfortunately, he was right to worry. Today, for many doctors, technology has become the central means of practicing medicine instead of a helping tool, sometimes to the detriment of the patient.

In conclusion, returning to the point he made at the farbrengen, the Rebbe offered this advice to me as a doctor and director of a hospital, “Don’t sanctify illness, sanctify health. Make the hospital a place that an individual goes to to improve his health, not a place where he goes to because he is sick.”

I walked out of the meeting with the Rebbe extraordinarily impressed. As someone who spends considerable time in the religious world, I can testify that it is a rare phenomenon to meet a Torah scholar who can also converse about science and medicine. But the Rebbe did more than converse; he wasn’t merely knowledgeable – he actually foresaw how rapidly the world was moving ahead, and he anticipated the forthcoming problems which medical professionals had barely began to think about. In hindsight, I believe that meeting has had not a small influence in shaping my own thinking, my own approach to these issues and my own vision of the role of medicine in society.