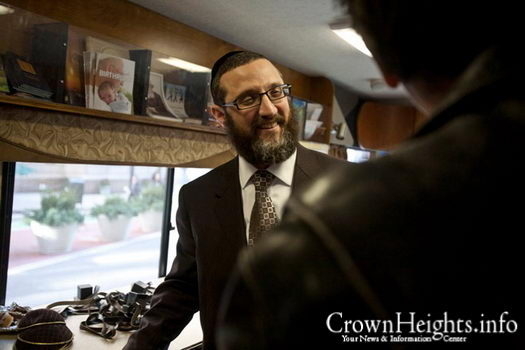 Rabbi Levi Baumgarten greets a visitor inside his Mitzvah Tank.

A month ago Mr. R. D. related the following personal story when he came to comfort the Baumgarten family upon the loss of their mother, Mrs. Nechama Baumgarten obm.

It happened eight years ago, our precious seven year old cheerful and energetic daughter began feeling tired and weak. After going to various doctors we went to a specialist who gave us the news that every individual and especially a parent dreads to hear, our precious young daughter has the dreaded disease.

Our life was immediately turned upside down, we have to find a doctor who can cure her. Reaching out to our friends we asked, if they know of a miracle treatment or doctor. Someone just may know something.

One of my close friends advised me to contact Rabbi Levi Baumgarten, you know the Rabbi who parks his big motor home, or as they call it a Mitzvah Tank on the streets of Manhattan and speak to him.

I listened, and thank G-d that I did so and we set a time where he can meet us in our home. Hearing our pain, he replied humbly, I am not able to promise a cure, however I can share with you the advice that the Lubavitcher Rebbe gave to many and I mean hundreds and indeed thousands of Jews who were facing such a predicament, and they were helped.

The Rebbe would advise the family to check all the mezuzos in their home as well as the tefillin of the father or the individual who needs a blessing. Furthermore, the mother and in your case the daughter also should accept upon themselves to usher in the Sabbath and holidays by lighting the candles at their appropriate time, some time, normally eighteen minutes before sunset. So in the summer it can be after seven or even eight in the evening, while in the winter it must be done shortly after four in the afternoon.

Looking at each other, my wife and I immediately agreed to this; after all it was a small thing that can and indeed brought us tremendous jubilation and relief.

Rabbi Levi took down the mezuzos and noted from door each one came from and I also gave him my tefillin to check. He took it to a scribe and called us the next day that a few of the mezuzos were invalid (possul). Letters were completely cracked etc.

He then mentioned that the one on the door to our daughter’s room was one of the invalid mezuzos. I thanked him for his help and immediately requested that he obtains for us kosher mezuzos. That same day he returned to our home and all the doors now had kosher mezuzos.

We thanked him and he then advised us all, my. Wife, daughter and myself, to go to the Ohel and pray for our daughter’s health. We should write in the letter the complete diagnosis of the doctors, as well as mentioning that we checked our mezuzos and replaced all the invalid one’s, including the one on her room, and also my wife and daughter have accepted upon themselves to light the Sabbath candles each Friday afternoon at the appropriate time, as well as on the eve of the holidays.

Two hours passed, and then three and no one was coming out of the surgery room. You could understand how our emotions and fear grew from minute to minute being in the dark for so long. Mr. R. D. paused for a moment as he tried to control his emotions, recalling the events of eight years ago, and then continued; about four hours after the operation began the doctor came out with a puzzled look on his face. A look that we didn’t know what it meant.

He then said, we opened up your daughter to cut out the entire growth. However, we couldn’t find anything. Looking at the xrays we were confused, there was definitely something here, it must have moved to the side. So we decided to probe further, but we couldn’t find anything. After looking here and there we came to a conclusion that somehow, for some mysterious reason, the growth entirely disappeared. This is nothing short of miraculous.

I present this story as the custom is to check our mezuzos and tefillin in the month of Elul. And just as Hashem heard that family’s prayer and may they remain well, so too may Hashem listen to all of our prayers, and may it be a sweet, healthy, happy and prosperous year, and may we all merit the coming of Moshiach speedily in our days.