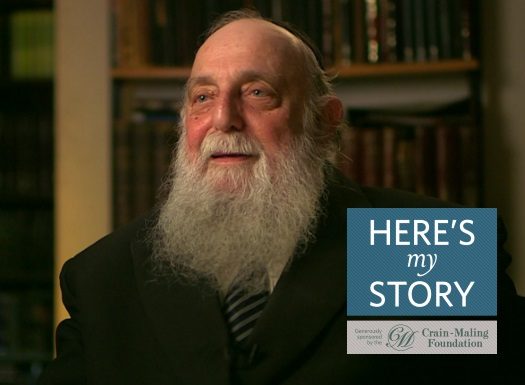 Rabbi Nachum Zevin serves as the Chief Rabbi of Kiryat Eliyahu near Haifa. He was interviewed by JEM’s My Encounter with the Rebbe project in his home in June of 2014.

My grandfather, the prominent Israeli rabbi, Shlomo Yosef Zevin, came from a Lubavitcher family. He was in constant contact with the Rebbe, and when I decided – in 1955 – to begin learning in the Chabad yeshivah in New York, he was delighted. (Previously I had studied at the Ponevezh Yeshiva in Bnei Brak.)

Obviously, one of the main attractions of studying in New York was the opportunity to spend time with the Rebbe. And, as it happened, during my stay I had the chance to speak with him privately on three separate occasions.

The first audience included a lively discussion concerning my various Talmudic studies. My second audience was even more interesting. In middle of our conversation, he suddenly asked me, “What are you doing here in New York – doesn’t Jewish law prohibit a resident of Israel to leave for the Diaspora?”

I was a bit surprised by this question, as I had expected the Rebbe to know the three conditions which permit one to leave the Holy Land, but nonetheless I answered, “One may leave Israel for the sake of livelihood, to seek a wife or, as in my case, to study Torah.”

“Does that mean then,” he responded, “that before leaving Israel one must make a calculation – namely, that one would study more in the Diaspora than otherwise? And, having made that calculation, one need no longer think about it?”

He paused and then continued, “Or, does it mean that one must ask himself every day: ‘I am a resident of the Holy Land of Israel, what am I doing in New York?’ And every day one must be able to answer, ‘I have studied more today than I would have back home.’ Is that what one must do?”

I had never considered this question before, and I was most amazed. It was one of the many things that amazed me. Daily, I was amazed at how much the Rebbe demanded from his yeshivah students – that we should literally immerse ourselves in the study of Torah, that we should keep increasing in our studies, and that we should not be satisfied with our past achievements. But as demanding as he was, he also cared deeply about our welfare.

It was only after I had already left the yeshivah that I learned just how important my own welfare had been to him. For example, when I first arrived in New York, he had personally instructed his secretariat to see to it that I was properly settled in.

On another occasion, he took pains to pick me out of a crowd and write about me to my grandfather. On that occasion, during Simchat Torah, I was standing in a crush of chasidim. And then I saw the Rebbe, up on his podium, turn to confer with his secretary, Rabbi Chaim Mordechai Aizik Hodakov, who pointed me out to him. I wondered what the Rebbe might want with me, but it was not until I returned to Israel that I understood. That’s when I read a letter he had sent to my grandfather in which he wrote:

I noticed, during Simchat Torah, that your grandson was being squeezed in the crowd – may he merit that it should be fulfilled in him what is said about the Nation of Israel, which is compared to an olive: “Just like an olive is squeezed to procure oil, so too the Jewish people – when they are squeezed, the best is extracted from them.”

My third and final audience with the Rebbe took place when I had completed my studies and was about to return to Israel. I had handed him a note on which I jotted down a request for his blessings of success in my continued studies. He responded, “May G-d grant the wishes of your heart, both for the things which you included in your note and for the things which you failed to include in your note.”

Our connection didn’t end there. During my wedding, as is the Chabad custom, I recited achasidic discourse by heart in front of all the guests. A short while later the Rebbe wrote to my grandfather:

I was informed that your grandson, Rabbi Nachum, recited a discourse at his wedding. I am surprised that such good news was withheld from me.

It amazed me, as well as my grandfather, that the Rebbe cared about what a yeshivah student had recited at his wedding. But, this was just one respect in which he was so unusual.

I have had the privilege to meet many important rabbis and Torah scholars, and I observed that they needed, from time to time, to take a break for the sake of their health. But the Rebbe lived in a way no normal person could physically manage – without a break, without a vacation. This was something I could never comprehend. Looking back, I just want to say that being able to witness the way he served G-d and the Jewish people was something that I will always cherish.