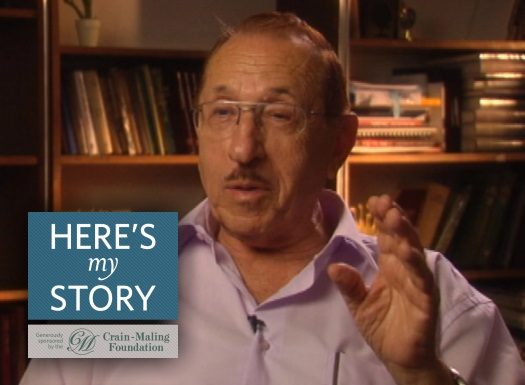 Yosef Lautenberg was injured in the battle for Jerusalem during the War of Independence in 1948. He was among the founders of the IDF Disabled Veterans Organization, and the founder of Beit Halochem – a rehabilitation facility for wounded soldiers. He was interviewed by JEM’s My Encounter with the Rebbe project in Tel Aviv in August of 2009.

After establishing the IDF Disabled Veterans Organization, I led an Israeli delegation to the 1976 Paralympics in Toronto. Following the games, I got the idea of bringing this group to meet the Rebbe, and when I called Chabad Headquarters to arrange the visit, I received an instant positive response.

On the appointed date, I brought in two busloads of people, among them many former soldiers who had suffered serious injuries in the Yom Kippur War a few years earlier. We were ushered into the main synagogue, which was permeated with a very special atmosphere; it seemed to me that holiness hung in the air. And I must say that, personally, I awaited the Rebbe with tremendous emotion.

When the Rebbe came out, he spoke to us in Hebrew, even though generally his public speeches were in Yiddish. What he said was recorded on tape; he began:

“Just as all Jewish people are able to unite together, rising above the bounds of space, so too are they able to unite and transcend the limitations of time. And this also explains the power of Israel, the Eternal People. Although they are called ‘the smallest amongst the nations,’ they are fewest only in a particular place and time. For, in fact, all Jews – from Mount Sinai until the end of generations – are guarantors for one another, and they constitute one entity, one nation. Thus they are numerous and powerful also in quantity in comparison to all the other nations. We see from this that the Jewish people’s ability to transcend the bounds of space and time stems from the innate ability of the Jewish nation to elevate the spiritual over the physical, and to elevate quality over quantity…”

He was saying this to people who were missing limbs, who had been severely injured, and his words truly spoke to everyone’s heart. Some were traditional Jews, some non-traditional, but everybody embraced this meeting with the Rebbe – they treasured it. No question, they were very moved by it, especially when he addressed us directly.

He went on to say that even if a person is lacking something quantitatively, it is no reason at all to be downcast. Quite the contrary, because he is lacking something physical – by no fault of his own, or even more so if his injury comes as a result of doing a good thing, especially through sacrificing himself in defense of the Jewish people anywhere, but especially in the Holy Land – this is proof positive that the Creator has endowed him with special spiritual powers. This person is not just equal to all those around him, the Rebbe insisted – for his superior spirit enables him to overcome the apparent physical shortcoming. In other words, he is able to succeed above and beyond the ordinary person.

And then he stunned us with this statement:

“For this reason, I do not approve of the term ‘handicapped,’ which suggests some type of inferiority. To the contrary, we must emphasize that this person has been designated as someone special and exceptional by the Creator, Who endowed him with powers above and beyond the capacity of an ordinary person. These powers enable him to overcome hardships and obstacles which an ordinary person cannot. Therefore, in keeping with the Jewish custom of offering advice even in areas that are not quite one’s own business … I would like to suggest that the name be changed from ‘handicapped’ to ‘exceptional’ – whether exceptional by an act of war, or otherwise. And this change in name is not merely semantics, rather, it describes the situation in the truest way.”

We sat there transfixed, listening to him. And I, as a person who has spent my entire life in this field, can tell you that the Rebbe’s words
have been a guiding light for me. I’ve met people who were injured in the worst ways … blinded, paralyzed … And with the little bit they had, these people have achieved the greatest accomplishments one could imagine. Someone who doesn’t know this field would never believe it. But the Rebbe understood this immediately when he met with us. And this spoke to us
in an exceptional way.

When he finished his talk, he said:

“When Jews meet, they extend their hands to one another to express the fact that they are one. This is alluded to as our Torah was given through Ten Commandments – five commandments engraved on one tablet and five on the other. When two Jews shake hands, the five fingers of one person meet the five fingers of the other, and together they reflect the Ten Commandments, and the Ten Divine Utterances with which G-d created the world, and G-d’s Divine Providence over every single individual, wherever he may be. Therefore, before I conclude, I would be honored if I could shake each of your hands and reciprocate your greeting.”

Then the Rebbe came down to us – something which we were told was completely out of the ordinary. He came down to shake the hand of every member of the delegation. It was a sight that is hard to describe … And he gave one of his famous dollars to each person. This took at least an hour, maybe more, but the Rebbe made sure he went over to touch and converse with each and every one of us.

We felt that this man truly loved us – that he loved those who had sacrificed their bodies for the preservation of the Land of Israel. It was palpable. We all felt this had been a special meeting.