« Op-Ed: My take on Pokemon Go
Info to Be Menachem Avel Lezell Family » 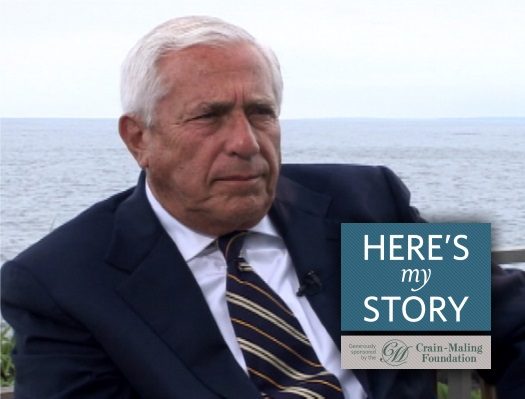 In 1969, Mr. Gordon Zacks was the chairman of United Jewish Appeal’s Young Leadership Cabinet and served on the George Bush Presidential Library Board of Trustees. He was interviewed by JEM’s My Encounter with the Rebbe project in August of 2007.

Apparently the Rebbe read about my speech and he decided that he wanted to meet me. So I was invited to come in for a private audience.

I was escorted into the Rebbe’s study, and I’ll never forget that moment if I live to be a hundred. As I walked in, he stood up. He had these penetrating, crystal clear, blue eyes. His presence was so intense and yet so peaceful at the same time. I mean you could feel such energy there, and there was also such serenity and peace. It was a very, very strange combination of factors that was most impressive. And the memory of this meeting remains a very vivid part of my life experiences.

That was the opening to the conversation in the course of which he encouraged me to open up my head and my heart to learning how to be Jewish. He said something that was very profound and very real: “Remember Mr. Zacks, if you want to change the world, you have to first change yourself.

“When you change, it’s like dropping a pebble in a lake,” he told me. “There are ripples that go out from the point of contact, which influence all those around you. If you change and become connected to G-d in your soul, and as a consequence, you behave in a manner that G-d would require of you, it will impact the people around you. The power of that impact is the first and the most important step toward making the world a better place. So remember to focus on yourself first.”

It was a conversation that lasted an hour-and-a-half, but that’s what he said in a nutshell. I remember he said to me, “I also want you to think about what needs to be done to save the Jewish people from the fires of assimilation.”

When I walked out of there, I was deeply affected. To this day, the Rebbe remains one of the most extraordinary people I have ever met in my life. He had a profound impact on the life choices that I made from that day forward.

Time passed — something like seventeen or eighteen years — my youngest daughter, who is now married and lives in Israel, decided that she wanted to go to Crown Heights on one of the days when the Rebbe was distributing dollars, she asked me to go with her.

I didn’t call anybody to try and get any special consideration. We simply took a cab to Crown Heights, and we waited in line with everybody else. I remember, the line went on forever. We must have stood in line for an hour-and-a-half.

My daughter was in front of me, and she got a blessing from the Rebbe together with a dollar to be given to charity. I came in right behind her. The Rebbe asked me, “What are you doing for the Jewish people and Jewish education?”

It was as if I had just walked out of his office a few minutes before and all these years had not passed. Astonished, I looked at him and I exclaimed, “Rebbe, you’re amazing!”

He said, “Whom does it help that I am amazing? How are you going to help the Jewish people? What are you doing for Jewish education?”

It was as if our first conversation those many years ago had not been interrupted by time.

« Op-Ed: My take on Pokemon Go
Info to Be Menachem Avel Lezell Family »