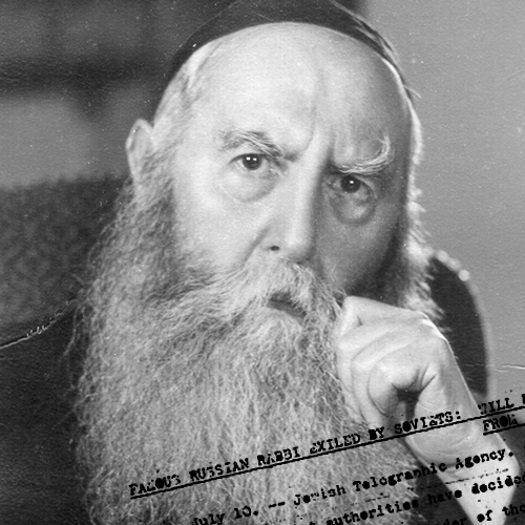 Today marks the anniversary of the freeing of the sixth Chabad Rebbe, the Rebbe Rayatz, from Soviet prison. In honor of the occasion, we present a series of articles from the Jewish Telegraph Agency (JTA) after the 1927 arrest and later release of the Rebbe, courtesy of Lubavitch Archives.

Please note that some of this information may be inaccurate.

The famous Lubavitcher Rebbe, Schneersohn, a Chassidic rabbi, has been arrested on the accusation that he collected money for the maintenance of his Yeshiva. The Yeshiva of the Lubavitcher Rebbe enjoyed great prestige in the Jewish world, being one of the most famous Yeshivas.

Rabbi Schneersohn holds a position of high regard and esteem. His arrest has caused great excitement among the Jewish population.

Rabbi Schneersohn, known as the Lubavitcher Rebbe, the leader of the Chabbad Chassidic school, was released from imprisonment, according to dispatches received here from Leningrad.

The Chassidic leader was arrested on the charge that he collected funds for the maintenance of a Yeshiva. The dispatch states that following his release he was placed under the supervision of the OGPU, the political police of the Soviet government.

The report of the arrest of Rabbi Schneersohn of Lubavitch in Leningrad, reported by the Jewish Telegraph Agency from Riga, has caused tremendous excitement and grief among his followers here.

They have proclaimed a fast day and recited special prayers of supplication in the synagogues. The telephones of the Jewish Telegraphic Agency office here were besieged all day with enquiries whether there has been any further developments.

To-day’s telegram from the J.T.A. representative in Riga that the Rabbi has been released under OGPU surveillance has given great joy here.

The dispatches concerning the release of Rabbi Schneersohn, the leader of the Chassidic Chabad school, were received here with tremendous interest by the numerous followers of the rabbi.

When the first dispatch of the rabbi’s arrest was received, his followers, the Lubavitcher Chassidim, called for a day of fast and assemblage in the synagogues.

The office of the Jewish Telegraphic Agency was continually besieged by the Rabbi’s followers, asking for further news. When yesterday’s dispatch announcing his release from prison was received, the Lubavitcher Chassidim celebrated the event.

A later report just received here from Leningrad states that Rabbi Schneersohn of Lubavitch has not been released, as was at first stated. He is still in custody. Jewish Orthodoxy in Leningrad is contemplating action with a view to starting a protest movement abroad against the arrest of the Rabbi

FAMOUS RUSSIAN RABBI EXILED BY SOVIETS: WILL BE KEPT ISOLATED FROM JEWISH ENVIRONMENT

The Soviet authorities have decided to exile Rabbi Schneersohn of Lubavitch, the leader of the Chassidic Chabad sect to Kostroma in Central Russia and to keep him there isolated from Jewish environment. The Rabbi was recently arrested in Leningrad on a charge of collecting funds for the maintenance of Jewish theological schools.

The Soviet government granted the request of leaders of the Jewish population in the Union and abroad to release from arrest and exile Rabbi Schneersohn, the celebrated leader of the Chassidic Chabbad school, known as the Lubavitcher Rebbe.

It was announced today that the “case” will be dropped against Rabbi Schneersohn, who was exiled for having collected funds to maintain Yeshivas, Jewish religious schools, in Russia. Rabbi Schneersohn will return to Leningrad this week from Kortroma, where he was exiled.

It is understood that the Jewish communities of Moscow, Leningrad, Kiev, and Minsk have given guarantee to the Soviet authorities of the famous rabbi’s “complete loyalty.”

LUBAVITCHER REBBE TO SETTLE IN LATVIA

It was stated that the Latvian government has granted permission to the Lubavitcher Rebbe to come to Latvia.

RIGA HEARS SENSATIONAL REPORT ON CAUSE OF LUBOWITSCIIER REBBE’S ARREST

Revelations concerning the recent arrest and release of Rabbi Schneersohn, the famous Russian Jewish religious leader, known as the Lubavitcher Rebbe, and head of the Chassidic Chabbad school, which has numerous followers throughout Jewish communities of the world, were consumed in reports received here from Moscow.

Rabbi Schneersohn was arrested by the Soviet authorities in the middle of June and was brought to Moscow where he was ordered exiled Kostroma. The order of exile was then revoked. After spending a month in prison he was released the middle of July and granted permission to leave t Russia, the Latvian government haying permitted him to settle permanently in Riga.

The imprisonment of Rabbi Schneersohn who is held in high esteem by Russian Jews and who has never before been interfered with by the Soviet authorities during all the years of the Soviet regime gave room for much speculation as to the cause of his arrest and the sudden decision to release him. Is Chabbad Chassidic circles his arrest and release are viewed as an event similar to that which befell his great grandfather who was arrested during the regime of Nicholas I and whose release is still considered in Chassidic tradition a miracle.

The original report concerning the Rabbi’s arrest stated that the charge against hint concerned his alleged activities to raise funds for the maintenance of his Yeshiva, which has been in existence for a long time with the Soviet authorities taking no cognizance of it.

Well informed circles in Moscow, according to the reports received here, trace the arrest of Rabbi Schneersohn to a serious party conflict within Russian Jewry and place the responsibility for the course of the events upon certain Jewish leaders. The controversy centered around the proposed conference of Jewish kehillahs in the Union of Socialist Soviet Republics, which is to be held in Leningrad on October 21, with the permission of the Soviet government, being the first of its kind to be held since the establishment of the Soviet regime.

Permission to hold this conference was granted by the government following the submission of a memorandum on this question by the leaders of the Jewish kehillah in Leningrad. It is stated that although there was unanimous agreement that some steps are necessary for consolidating the Jewish religious activities in Soviet Russia and trying widen their scope as much as possible, and although the agenda of the conference was approved by the government, Rabbi Schneersohn and the group of rabbis associated with him voiced their opposition to the holding of this conference at the present time. They contended that in view prevailing conditions it would be possible to elect a truly representative body of Russian Jewry and that committee which might result from this conference would not be endowed with the power to carry on the work and have the religious authority required.

This attitude of the Lubowitscer Rebbe called forth resentment among the initiators of the Leningrad conference. To remove his opposition they decided, it is stated, to discredit him in the eyes of the Soviet authorities, an action which resulted in his arrest.

This charge against the initiators of he Leningrad conference could not be verified for obvious reasons. Rabbi Schneersohn’s release was brought about by the intercession of his friends, the echoes of the event abroad and the guarantee of the Jewish community of Moscow for the Rabbi’s complete loyalty. It was stated that Michael Kalinin, president of the Soviet Republic has interested himself in the case.

This development has made uncertain the fate of the Leningrad kehillahs conference. There is no definite knowledge as to whether or not it will convene on October 21. The reports add that the resentment against the action of the conference initiators is so strong among religious Jews that it is planned by even those communities which originally intended to send representatives to boycott the conference. According to the original plan 110 kehillahs throughout the Union of Socialist Soviet Republics were to send 179 delegates. The agenda included questions pertaining to the establishment of Mikvehs, ritual baths; the founding of Yeshivas and maintenance for rabbis and synagogue officials. The conference was also to consider the question of the Chedarim, the Jewish religious schools; the printing of religious books and the problem of Sabbath observance. It was also to consider a plan to create a Union of Kehillahs in Soviet Russia.

The struggle which the religious Jews of Soviet Russia had to make to maintain their positions against the onslaught of the Jewish Communists, was described today by Rabbi Schneersohn, the famous Lubavitcher Rebbe, in the course of an interview which he gave to the press on his arrival here.

In 1921, when Russia was still completely shut off from the outside world, he said, the economic position was very bad, but the persecution in the religious sphere was a thousand times worse. There was a merciless campaign against every appearance of religious feeling. The Lubavitcher Rebbe lived at the time in Rostov, far away from the Jewish centers. He decided to go to Moscow. The first secret conferences were held there, all being Lubavitcher Hassidim numbering about 1,500 to 2,000 persons. Reports were submitted on the position of Jewish religious affairs in the various places. The rabbi then approached Rabbi Rabinovitch, who has since died, asking him to convoke a conference to consider Jewish religious questions. The rabbi replied that he dared not do this, so the Lubavitcher Rebbe took the initiative himself and ten days after the conference was held. The question was dealt with in earnest for the first time at this conference. All the conferences were held in secret. From that time, the work for the revival of Jewish religious life in Russia commenced.

The Soviet Government was never so hostile to the Jewish religion as the Jewish Communists. At present the position of Jewish religious life is no longer as bad as it was before. The synagogues and Beth Medrashim are packed. There are also Yeshibas which are permitted to maintain students of the age of eighteen, but even here they are in fact persecuted by the Jewish Communists. But the Russian Jews are able to resist persecution. In this respect they must have assistance from foreign Jewry. Something is already being done in this respect, but not to a sufficient extent, the rabbi declared.