« ‘Rabbi, How Can I Prepare for the Worst?’
Campus Shluchim Focus on International Growth » 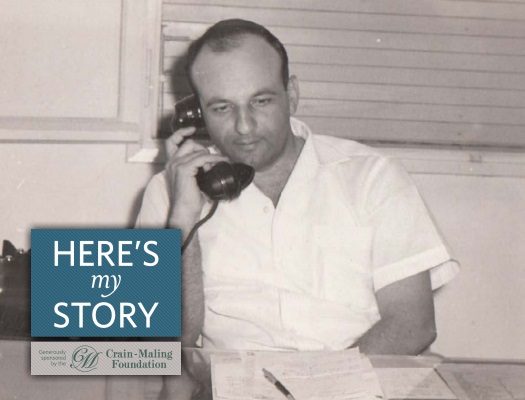 Mr. Alter Volner was the executive director of ITIM news agency from 1976 until the early 1990s. He was interviewed by JEM’s My Encounter with the Rebbe project in his home in Israel in December of 2011.

I began my journalism career in Tel Aviv as a local writer for the religious newspaper Hatzofe(“The Observer”). After several years, I was promoted to the post of managing editor for the entire newspaper.

Two years prior to my promotion – that is, in 1958 – I had reason to be in New York, and when my father heard about my impending trip, he urged me to use the occasion to meet the Rebbe of Chabad Lubavitch. Although my father was not a Chabad chasid himself, he would regularly correspond with the Rebbe via the Rebbe’s secretary, Rabbi Chaim Mordechai Aizik Hodakov.

I obeyed my father and I made an appointment, which was scheduled several days after Purim for eleven o’clock at night. When I arrived at the Chabad Headquarters in Crown Heights, the first thing that struck me was the level of activity which was taking place at such a late hour. It might as well have been the middle of the day. I waited while many others waited with me, secretaries rushed to and fro, and yeshivahstudents studied Torah in the adjoining room. Finally, at one o’clock in the morning, I was ushered into the Rebbe’s study.

As soon as I entered, the Rebbe stood up. He greeted me with a smile on his face and he shook my hand. He invited me to sit down and, after a brief introduction, we began discussing the function of a newspaper – more specifically, a religious newspaper.

“The truth of the matter is,” he said, “the world would probably be better off without newspapers altogether. Rather than reading them, people’s time would be better spent studying Torah. But since newspapers do exist, there is a danger that people might read the wrong newspapers and be influenced by ideas counter to Judaism, it is absolutely necessary that there should be religious newspapers to present the news in a way that will bring Jews closer to Judaism.”

The Rebbe continued, “Only when a religious newspaper serves such a purpose does it have a reason to publish. For instance, if it reports that President Eisenhower met with another head of state in a way that demonstrates this is all part of G-d’s plan, then such a newspaper is supporting Judaism.”

The Rebbe emphasized the importance of maintaining a high standard of quality; otherwise people will be motivated to search for news elsewhere, defeating the entire purpose. But, while maintaining quality, the reporters and editors must always keep Judaism in the forefront of their minds, he said.

I asked him about several controversial issues we were facing. For instance, there was a great debate among our editorial staff if we should report on sporting events. Many staffers opposed the idea because sports have absolutely no correlation with religion and therefore, they felt, such reporting does not belong in a religious newspaper.

The Rebbe answered that, regarding events which take place on Shabbat, there is no question that we must avoid them. But regarding weekday sports events, we should definitely cover them. If not, readers are likely to look elsewhere for such news, and we will lose the chance to influence them in a positive manner.

Then I brought up a sensitive subject which was pitting Jew against Jew in Israel – the extreme divide between the religious and secular communities. I mentioned that, earlier that year, the rabbis of Kfar Chabad invited the Interior Minister, Yisrael Bar Yehuda from the Labor Unity Party – which was then staunchly anti-religious – to an event. “How could Chabad have invited someone who was opposing religious values in the Holy Land?” I asked.

“What would be gained from distancing him?” the Rebbe countered. “Would that help anyone? On the other hand, when we accept every individual unconditionally, no matter his position, then perhaps one day he will come to reverse himself. This does not mean we should accept his views or agree with his opinions. But to invite him to a religious event, what could be better?”

This led to another, related discussion. In those days the Israeli government had appointed Rabbi Yosef Brandwein to head a department of religious affairs. Due to their great mistrust of the government, many religious leaders rejected any assistance from this department, fearing the government would use it as an excuse to meddle with the administration of religious institutions. I asked the Rebbe his opinion on this subject.

He answered: “Let us suppose that we oppose this department – will anyone gain anything? Rather, we should ask: If we work with its representatives, will there be more synagogues and schools? If the answer is yes, then not only should we cooperate, we should encourage them. Indeed, we should encourage all those who advance Jewish causes, no matter what their title or with whom they are associated.”

Our conversation lasted for almost two hours, ranging over many topics, including the relations between various religious communities, and even between various religious newspapers. The Rebbe seemed distressed by the divides that existed between different religious factions in Israel, and he expressed dismay at the disrespectful articles being written in our religious newspapers. He asked that I do whatever was in my power to correct this problem.

Throughout our entire meeting, I was in awe. The Rebbe’s face shone, and I will remember the light of his countenance for the rest of my life. I felt as if I was sitting in the presence of supernal wisdom. Even at the end of the meeting ­– at three in the morning – the Rebbe looked as alert as if he had just started his day. I left the room full of emotion, and those feelings have stayed with me until today.

In the years since then, more than once while writing an article, I would stop and ask myself, “Is the way I am writing going to bring someone closer to Judaism? What would the Rebbe think about this articles authored by Alter Volner?”

« ‘Rabbi, How Can I Prepare for the Worst?’
Campus Shluchim Focus on International Growth »