« Video: What Is Real Unity?
$3M Playground in the Works for Crown Heights Park » 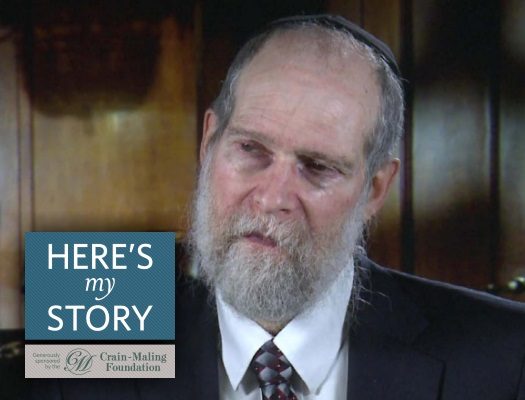 Dr. Gedalya Shechtman is the United States Department of Veteran’s Affairs’ Chief Consultant for Primary Care Services. He was interviewed in the My Encounter studio in February of 2016.

I grew up in Long Island, the son of Russian immigrant parents, who had escaped religious persecution and who raised me and my siblings in a non-observant atmosphere. I went to college in the late 1960s which was a very wild time. The hippie culture was on the rise, and young people were challenging the status quo. I also took part in that, questioning Judaism (among other things) and concluding that it didn’t really have much substance.

One day in the mid-1970s all of that changed, when I encountered a large van filled with young yeshivahstudents, which I later learned was called a Mitzvah Tank. One of the students asked me if I was Jewish, and when I answered that I was, he pulled me into the van and began wrapping teffilin on my arm. I remember being impressed by his earnestness and how important this seemed to him and his colleagues. When he finished, he convinced me to sign up for a new campaign the Rebbe had launched: the mezuzah campaign. A short while later, I received a brand new mezuzah for my apartment, free of charge.

From that point on I began exploring Judaism and, when I went to Medical College of Milwaukee, I got in touch with Rabbi Yisrael Shmotkin, who was the Chabad emissary there. Eventually, I ended up renting a room together with four other medical students at the Lubavitch House of Milwaukee. Needless to say we had a tremendous experience, and I began leading a Torah-observant life.

A few years later, in 1978, after I finished medical school, I moved on to Montefiore Hospital in the Bronx as an oncology fellow. While I was there, a fifty-year-old Iranian Jew who had recently immigrated to the United States came in for a consultation; as I recall he was accompanied by his two sons, and all were wearing yarmulkes.

As an oncology fellow, it was my duty to evaluate new patients. I took down this man’s medical history, and I learned that his family had lived in Iran for many generations. However, he left for the United States in order to get treatment for a blood tumor, known as multiple myeloma. This tumor can be quite aggressive, but often it hangs on for years until it finally gains momentum, and then it becomes problematic very quickly.

Initially, this patient had been treated in Baltimore, but after encountering some problems there, decided he wanted a second opinion and came to us.

It seemed to me that his myeloma was under control, so I decided to continue his current therapy to see how he would do over the next few months, and then make a decision.

During this time, I saw him on a monthly basis, and it quickly became clear to me that his situation was deteriorating. He was having more pain, particularly in his back, and he started to need a walker to get around. I could also see that his blood counts were getting lower, which was a sign that internally things were getting worse.

So I informed him, “In light of these recent developments, you need to change therapies.” At first he was very agreeable. But when he learned that we would substantially increase his chemo dose, adding new toxins, he became unsure and somewhat resistant. After a bit of discussion, I managed to convince him to give the new treatment a chance, at least until we could see if it was effective.

This took place a few days before Shavuot. I wished him a happy holiday, and we parted with the agreement that I would see him again in a month’s time in order to evaluate how he is doing. But, I also informed him that if, in the meantime, there was worsening of the pain, he should call me.

I did not see him until his appointment one month later. He walked into the clinic, and I saw immediately that there had been a significant change. Instead of shuffling with the aid of a walker, he was walking erect with a smile on his face. He was joking with his sons who accompanied him, and I could see that he was a different person.

I was very impressed, but I couldn’t determine the cause of the change until the blood counts came back. Sure enough, when they did, everything was normal. There were no traces of abnormal blood cells. I couldn’t believe it!

I shared the news with him, explaining how this outcome was beyond my wildest expectations. It seemed he’d had a remission after just one course of therapy. So I encouraged him to continue.

Before he left, he said, “Doctor, there is something I need to tell you. After the last visit, I really wasn’t sure about this new chemo, so I didn’t take the medication right away. I waited until after Shavuot, when I knew that the Lubavitcher Rebbe would be distributing wine to everybody present, and I would have a chance to get a blessing from him.

“So right after the holiday ended, I went to Chabad Headquarters for the kos shel brachaceremony. When my turn came to approach the Rebbe, I told him briefly that I had been ill, and I asked him to give me a blessing for a complete recovery.

“The Rebbe blessed me and told me that I shouldn’t worry, that everything would be fine. And then, after I thanked him and began walking away, he called me back and said, ‘Make sure that you do exactly as your doctor tells you.’”

He said he followed the Rebbe’s instructions and began the course of treatment I had prescribed. He took the medication as soon as he got home, and within days, was feeling remarkably better. Within a week, his pain was gone, and he felt like a new person. This is the story the patient related to me.

One year later, it was apparent that he’d made a complete recovery and, eventually, we lost touch.

I often pondered what had really transpired there. I only knew that before this man received the Rebbe’s blessing he was very ill and facing a long road ahead. Yet, after the Rebbe’s blessing, he recovered almost instantly. As for me, I received indirect confirmation that I – a young, as yet inexperienced doctor – was pursuing the right course of treatment. The Rebbe urged him to follow my instructions. This meant a lot to me.

I have heard so many stories like this. In a matter of a short encounter lasting a few minutes, the Rebbe could size up people, intuit their issues and dilemmas, and with his blessing leave an indelible mark on everyone he met.

« Video: What Is Real Unity?
$3M Playground in the Works for Crown Heights Park »