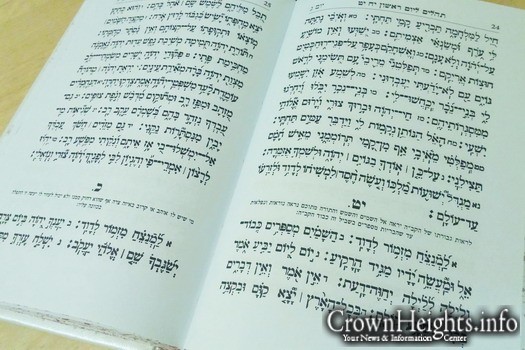 Shavuos is the Yahzeit of the Baal Shem Tov, as well as of Dovid Hamelech. The following is a story that the heilike Ruzhiner would repeat in the name of his great-grandfather the Maggid of Mezerith, which is connected to both of them.

One Friday morning the Baal Shem Tov informed some of his Talmidim that they should get ready to travel as he is planning on spending Shabbos in a certain town. The Talmidim immediately prepared the wagon and they set out. They arrived in the town and the townspeople were delighted from the surprise, the great tzaddik, the Baal Shem Tov himself is staying in their town for the entire Shabbos.

No one knew why, everything seemed to be going good, but if the Tzaddik requested that we say the entire Tehillim, we will do say. The Chazzan began saying it at a regular pace and he concluded it in less than two hours. Everyone closed their tehillim, but suddenly they noticed that the Baal Shem Tov instructed the Chazzan to begin it anew.

This is serious, who knows what is happening. Looking at his Talmidim to figure out the reason, they noticed that the Tzaddik’s talmidim were as baffled as them. So they said it a second time. But by now the women all came to Shul as they realized something unusual is happening, no one is returning home. This time it was said with a little more seriousness and they finished it a second time. But the Baal Shem Tov, immediately instructed them to say it a third time.

The people were extremely hungry, but now they realized that there is some real danger lurking against an individual, or perhaps a few people and chas v’sholom it might be that the entire town is in danger. The tzaddik would definitely not keep everyone away from their seudas Shabbos just like that.

They concluded it for a third time and looked at the Baal Shem Tov to see what his instructions are. This time he turned around and stated, “The danger has passed. Everyone should go home and eat their seudah. After the seudah, those who are able to should return and continue saying Tehillim until sunrise.

Everyone was baffled. No one knew of any danger that was hovering over the town, but if the Tzaddik said so, it must be true. However, he also announced that the danger is over, so that is the good news and they went home and almost everyone returned after they made Kiddush and ate the meal.

The next morning after Davening, the Baal Shem Tov instructed that they all eat the Shabbos meal together and make a seudas hodaah, they are to publically thank Hashem for his kindness and miracles. Once again they all looked at each other wondering what in the world had happened last night, but they did as told.

Ivan thanked him and gulped it down and upon the Baal Shem Tov’s instructions the student continued on refilling it, until Ivan was imbibed and tipsy.

At that point the Baal Shem Tov said, Ivan, would you tell please us what happened last night.

Being drunk, Ivan began saying, this past week, the local poritz (squire) gathered over fifty of us and instructed us to come to his house for a party on Friday night and at the party he will pay us to do some work for him. To receive free booze and get paid, was something we couldn’t turn down and we all came, and some of us even brought our friends and we began drinking.

After a few small drinks, the squire informed us that he is angry at the Jewish community and instructed his workers to bring out his swords and metal tools such as crowbars and we are to teach the Jews a lesson. The better the job, the more payment we will receive.

However, at that moment a beautiful carriage drove up and the squire noticed it was none other than one of his close cousins that he hadn’t seen for the past fifteen years. He thought that he heard that he had passed away in a tragic accident, but evidently that wasn’t true, so he told us to wait until he finds out why his special guest came.

They spoke for a long time and the servants continued bringing out more food, until it was midnight. The squire came into our room and said, I changed my mind, you men can go home. We were surprised and some of us were looking forward to freeing ourselves from the debts that we owed to the Jews, however, what could we do.

But then one person stood up and said, you hired us to work. We are ready to work, if you don’t want us to do anything, that is your business, however, we have to be paid. The squire thought for a second and shockingly he said you are right and gave us all a coin and we went home.

The people were horrified with what they were hearing, some almost fainted and now they realized why they were saying Tehillim until after midnight. The Baal Shem Tov thanked Ivan and wished him well and he left.

Turning to the people, the Baal Shem Tov now told them the rest of the story. Your Poritz had an evil manager who constantly spoke against you. Last week when the Poritz was reviewing his books he noticed that he was deeply in debt and asked his expert manager to explain, why, he who has plenty of fields ,inns and other assets is poor, while other poritzim with less than him are doing much better.

The manager, who has been stealing the money over the past few years, switched the blame onto the Jews. He said, the Jews refuse to buy your produce, so I have to sell it at a tremendous discounted price, for otherwise it would all rot. And they all use the mills of other squires not yours, so you lose out on that revenue as well. These and similar accusations infuriated the poritz and he swore to teach all the Jews a lesson.

Last night because of the Tehillim we recited, I was able to bring his dead cousin from the dead and he visited him.

When the older poritz saw the gathering he acted surprised and asked him why is he throwing a big party and didn’t invite him. Seeing that he was annoyed, he apologized and explained that this was not a real party, it was only to get the people drunk, in order that they will harm the Jews.

Hearing these ominous words the older poritz asked him why and he repeated everything that his manager told him.

The older Poritz shook his head in disbelief. You believe that pack of lies, it happens to be that I know the truth and that is why I was coming to you. Your wonderful manager is stealing you blind. He is demanding a premium price for all your produce and services and pocketing the extra for himself. For many years, the Jews were willing to pay, as they wanted to show their appreciation for the kindness and decency in how you were dealing with them.

However the last few years, he began demanding such exorbitant prices that they were forced to look elsewhere and some began dealing with me. When I asked them, why they stopped using your services, they explained it to me.

It took the dead poritz some time to convince him and only after we concluded the Tehillim for a third time was the danger over.

The Ruzhiner would then say, this explains why the Baal Shem Tov said Tehillim that Friday night. But why did he have to travel there, he could have said the Tehillim with all of his Talmidim in his own Shul, why in that town??!!

But the answer is a tzaddik stays with the people. The Baal Shem tov Davened for them to be saved and if chas v’sholom his tefillos are not accepted, I am with them in their trouble.

May Hashem have rachmonus on klal yisroel and save all our brethren from any suffering and may we merit speedily the coming of Moshiach ben Dovid, speedily in our days.