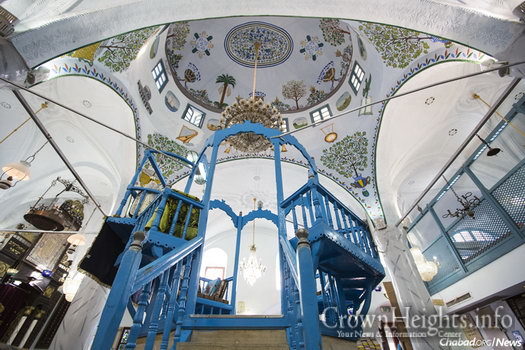 The historic Abuhav Synagogue is one of 60 in Safed where the Tikkun Leil Shavuos will be recited on the first night of the festival.

The first night of the festival of Shavuot is not one for sleeping in Jewish communities around the world. It is the night when Tikkun Leil Shavuot(rectification of the night of Shavuot)—a specific text comprising written, oral and mystical aspects of the Torah—is recited, followed in many places by study and classes until dawn.

In the holy city of Safed, Israel, where the text of the Tikkun originated, the electric aura of the holiday is almost palpable.

“There are approximately 60 synagogues here in Safed, from every nusach[prayer tradition]—Asheknazi, Sephardi, Lithuanian, etc.,” notes Chabad-Lubavitch Rabbi Shaul Leiter, director of the Ascent Institute of Safed, which he co-founded more than 30 years ago with Rabbi Yerachmiel Tilles and Rabbi Moshe Wisnefsky. “After the evening feast at around 10 p.m., you can see all the men leaving their homes on their way to begin the Tikkun, which will continue throughout the night along with other Torah study until around 5 a.m., when they make their way to purify themselves in a mikvah [ritual bath] before heading back to the synagogue for the morning prayer service.”

Several of the most famous synagogues in the world are located in Safed. There is theAri Synagogue, named after Rabbi Isaac Luria, the preeminent Kabbalist; The Beit Yosef Synagogue, named for Rabbi Yosef Caro, author of the Shulchan Aruch (Code of Jewish Law); The Ari AshkenaziSynagogue, located in a field where Rabbi Luria would bring his students out to greet the Shabbat Queen; The Tzaddik HaLavan, the oldest of the Sephardic synagogues in Safed; and the Abuhav, named after RabbiYitzchak Abuhav, a renowned 15th-century Spanish rabbi. Tradition claims that he designed the synagogue while still in Spain, incorporating Kabbalistic symbols into the structure.

“The Abuhav Synagogue is even more unique in that it has a 500-year-old Torah scroll that is still kosher,” notes Chaya Brocha Leiter. “This is parchment and ink. The parchment is gray, and the ends have fringes. And what is so miraculous here—aside from it still being in existence at all—is that each and every letter is still whole and kosher.

“There are only three times a year that this Torah scroll is taken out for reading: Rosh Hashanah, Yom Kippur and Shavuot. If one is lucky enough to actually merit to kiss this Torah, one actually can feel a surge of electricity enter oneself,” she continues, “and it so moves the person that they are overcome. People often find themselves weeping.”

Services and classes will also take place throughout the night at these sites, and at Chabad of the Old City, where Rabbi Gavriel Marzel will lead study sessions for dozens of residents, students and visitors from around Israel and abroad.

More than 100 guests are expected to join the Leiters at Ascent for night-long study. Chaya Brocha Leiter, program director of Ascent—who leads classes and tours throughout the year on the “who’s, where’s, what’s and why’s” of Safed and its history—explains why the Tikkun is associated with the city.

“Rabbi Yosef Caro was just 4 years old when his family left Spain in 1492, due to the Expulsion, and went on to Portugal. Just two years later, Portugal expelled its Jews as well. His family then wandered from city to city, from country to country, until they found safety in Constantinople [Kushta], Turkey. He married young, but due to poverty and disease, lost his wife and both of his children. He then remarried and started to learn with Rabbi Shlomo HaLevi Alkabetz, a Kabbalist and poet, whose Lecha Dodi is recited each Friday night to usher in the Sabbath.”

A Voice From Above

“According to a testimonial by Rabbi Alkabetz, in Salonica Rabbi Yosef Caro became one of those rare individuals who merited to be instructed by amaggid, a private angelic teacher. As they started their learning on the first night of Shavuot one year, at the exact stroke of chatzot [halachic midnight]—a time that belongs neither to the day nor the night, but is the revelation ofHashem Himself—a crude, intimidating, rough voice started to emanate from the rabbi’s throat. In Rabbi Caro’s published work titled Maggid Meisharim, which contain teachings of the Maggid, it is stated that, ‘I am the Mishna that speaks in your mouth,’ indicating that the Oral Torah itself [of which theMishnah is the fundamental part] spoke within him.”

“On the second night of Shavuot, the voice returned, telling them it was time to go to Eretz Yisrael. It told them that they would have food, provided from Above. Due to war in Italy and Turkey, and the famine that occurred, Rabbi Caro lost his second family, and at the age of 72 made his way to Israel.”

After Rabbi Caro’s arrival, the entire community adopted his practice of learning throughout the night on Shavuot—an ancient practice mentioned in the Zohar and only undertaken by a small number of select individuals. After a few years, leading Kabbalist Rabbi Moshe Cordovero—who was Rabbi Alkabetz’s brother-in-law and was also living in Safed—adapted selected verses from Tanach and Mishnah that had been studied, and created a specific order of study called Tikkun Leil Shavuot. It included the first sections of the Five Books of Moses, then sections from the Prophets and Writings, including “Song of Songs,” Ruth and Psalms; sections of the Mishnah; the poem “Azharot”; and in the end, portions from the Kabbalah, including the Zohar.

A version of the Tikkun was also formulated by the Arizal, Rabbi Isaac Luria, and conveyed by his disciple, Rabbi Chaim Vital, in Shaar HaKavvanot. Later, the renowned scholar and Kabbalist Rabbi IsaiahHorowitz, known as the ShelahHaKadosh, changed the order somewhat to include readings from all the books of the Tanach and theTalmud, as well as made other minor changes. This basic order established by the Shelah stands as the text of Tikkun Leil Shavuot used today in almost all Jewish communities.

“This was the Golden Age of Jewish mysticism,” explains Chaya Brocha Leiter. “There were 300 of our greatest sages in Safed. When Rabbi YaakovBeirav, the leading sage of Safed, passed away, Rabbi Yosef Caro was regarded as his successor. Together with Rabbi Moshe of Trani [the Mabit], they headed the Rabbinical Court of Safed. At this point, the Rabbinical Court of Safed had become the central rabbinical court in all of Israel, and of the Diaspora as well. And so the Tikkun was adopted by virtually the entire Jewish world.”

Learning is not confined to men. According to Leiter, a group of women always comes to learn—not the whole night, but for a while. “It matters not if you are a Torah scholar, per se. Even saying and learning about the Ten Commandments is fundamental, she says. “In our group, we not only recite the verses, but I also distribute pages with explanations of these verses that the women take turns reading aloud. Thus, they all actively participate in their own preparation for the main event of receiving the Torah the following day.”

Rabbi Shaul Leiter concluded by saying that all Chassidim say the Tikkun. He then offered an explanation from one of the Sichos of the Sixth Lubavitcher Rebbe, Rabbi Yosef Yitzchak Schneersohn, of righteous memory, from the summer of 1940: