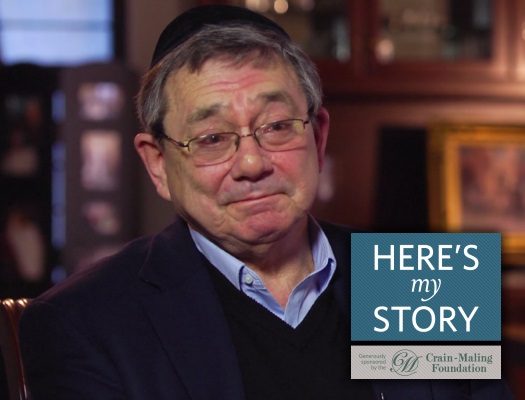 Dr. Harold Serebro is a medical practitioner, entrepreneur and author of several books. He served as a trustee of President Mandela’s Empowerment Award Program. He was interviewed by JEM’s My Encounter with the Rebbe project in Johannesburg, South Africa, in August of 2014.

My name is Dr. Harold Serebro. I was born and educated at Wits University in South Africa, where I studied medicine and from where I graduated as a medical doctor in 1961. I then did specialist training at John Hopkins University in Baltimore, and at Queens University in Ontario. After this, I returned to South Africa and opened a practice in gastroenterology.

In the course of my life, I became friendly with Rabbi Nachman Bernhard, who was my rabbi at the Oxford Synagogue in Johannesburg. One day – sometime in the early 1980s – he arrived at my clinic with a pile of x-rays in his hand. He told the nurse in charge that he had to see me right away regarding an urgent matter.

It was a very busy day for me, but I knew he would not be so insistent if it was not important, so I finished my examination of the patient I was with and asked him to come into my office.

He explained his dilemma to me: He had a congregant who was an elderly lady, very sick. X-rays had revealed that she needed an operation urgently, but he had consulted with the Lubavitcher Rebbe on her behalf, and the Rebbe said that she cannot have an operation.

So I said to him, “What do you want me to do exactly?”

Now, I would just like to point out that in those days there were no MRI scans, no ultra-sound, nor did we have available to us many of the sophisticated tests which we have now. X-rays were very important for diagnosis – in particular a diagnostic procedure called intravenous pyelogram, or IVP, during which a contrast medium is introduced into the patient’s bloodstream in order to x-ray the renal system.

I took a look. And I could clearly see that this lady had cancer in the upper pole of the kidney on the right – it was a well circumscribed cancer, a big mass.

“If these are the x-rays you sent to the Rebbe, it clearly shows cancer here,” I said.

He said, “I know, but the Rebbe says that no operation can be done on this lady.” So I said to him, “Rabbi Bernhard, there’s a big cancer here. You are a rabbi and not a doctor – you can’t interfere with the medical care of a patient. This woman needs an urgent operation.”

“There has to be a major reason why the Rebbe was so adamant she have no operation,” he replied.

By this time, I was irritated. I was very busy with a whole waiting room full of patients, and I was behind schedule. I could see this cancer clearly, and I was irritated that somebody who was not a doctor had said “you can’t operate” when this patient needed an operation badly.

But I said, “Let me look at the x-rays again.” As I was going through the pile of x-rays for a second time, I noticed that the patient’s name, which was hard to read on the bottom of the plates, was Mrs. Fendamova. So I asked Rabbi Bernhard, “Since when are you advising non-Jews?”

He said, “I don’t know what you are talking about. The lady’s name is Mrs. Levine.”

I took a closer look, and I said to him, “These x-rays are labeled Mrs. Fendamova, but the radiologist’s report is labeled Mrs. Levine. I’m going to phone the hospital where these x-rays were done.”

When I got the radiologist in charge, I asked him, “On this particular day, how many IVP’s did you do?” He said, “Two – one on a Mrs. Levine and one on a Mrs. Fendamova.”

I said, “You’ve got a serious problem, my friend, because you’ve taken Mrs. Fendamova’s x-rays, you’ve put them in a folder labeled Mrs. Levine, and you’ve reported Mrs. Levine as having this cancer, but the cancer is with Mrs. Fendamova. You’d better come to my office immediately and straighten this out, because this lady was going to have an operation which she doesn’t need. Fortunately, the x-rays were sent overseas where she asked for religious advice, and she was told not to do the operation. That was brilliant advice, because it has actually saved three people. It saved the lady, Mrs. Levine, from an unnecessary operation, it’s going to get Mrs. Fendamova the urgent operation that she needs, and it’s saving you from a lawsuit.”

The end result is that Mrs. Levine did not have any operation. She didn’t need any operation. She’d had a urinary tract infection, not cancer, and once this was properly diagnosed, she responded to treatment immediately. She became well, she thrived, and she had no problems.

Now what would have happened if she was sent for the operation? They would have opened her up and found nothing. But she would have been subjected to needless stress, and she’d been put under anesthesia which carries its own risks, particularly for an elderly person. So it was not a minor thing that the Rebbe’s advice saved her from all that.

Afterwards, in ensuing years, Rabbi Bernhard and I often spoke about it when we got together on Jewish festivals or for Shabbat dinners. The lesson to me was that you have to listen to everyone’s opinion, because arrogance comes before the fall. I was irritated in the beginning, but at the end I was astounded. And this incident had a very profound effect on me. Because of it, I started reading a lot of teachings and writings of the Rebbe and, even if I never had any personal contact with him, I was deeply affected by his tremendous wisdom.