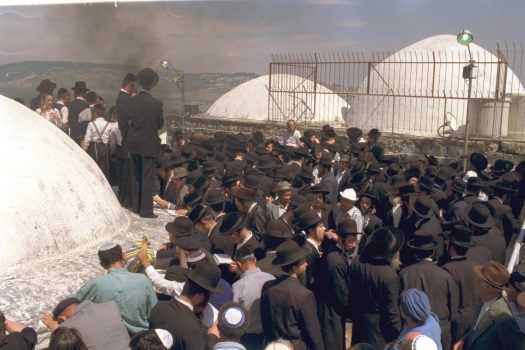 It was not an imposing building, but Jews from all backgrounds came there. Those that had a question in halachah came to the Rov, Reb Yosef Caro, the author of the Shulchan Aruch. Others came to hear the beautiful droshos of the Alshich, as he was the Maggid of the shul. However, it is known as the shul of the holy Ari, Reb Yiczchock Luria. He was the greatest master of kabbalah and students vied to be accepted in his yeshiva.

The Chazzan Reb Shlomo Halevi Alkabetz was also a great personality in kabbalah. In fact, he was the teacher and then brother in law of the kabbalist, the RaMaK, Reb Moshe Cordovero and he composed the L’cho dodi.

You might say wow, four giants in one small shul. But there was another person, Reb Elozer Azkeri, however, he kept his greatness to himself. He took the job as the simple shames and no one paid attention to him.

One Lag B’Omer, the Arizal together with his talmidim, went to Miron. There they learned and danced together. Reb Elozer also went to Miron, however, he was older and couldn’t travel as fast as they did, and subsequently arrived while the others were already dancing.

Suddenly the Ari, left his students and joined the two in their dance for a while. When the elderly Jew, whose face was radiant left together with the shames, only then did the Ari return to his students and continue dancing with them.

At one point, one of the students said a remark as to why would their rebbe the Ari dance with the simple shames. Hearing his comment, the Ari admonished him, and perhaps all of the talmidim, “You should know that Reb Elozer is no simple person. In fact he is one of the greatest men in our generation!

The students were shocked at this statement and asked, Rebbe, How do you know this?

The Ari replied, suffice to say that the person dancing with him, was none other than Reb Shimon Bar Yochai himself ! If Reb Shimon wanted to dance with Reb Elozer, so do I.

After that he could no longer hide his greatness and subsequently wrote his monumental sefer CHAREDIM on the 613 mitzvos of the Torah.