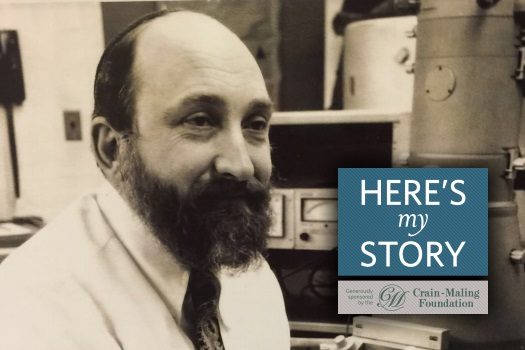 Dr. Yaakov Hanoka (1936-2011) was a specialist in solar energy who held 57 patents in the field. He was the founder of Evergreen Solar Inc. He was interviewed by JEM’s My Encounter with the Rebbe project in Brooklyn, New York, in March of 2008.

Click here for a PDF version of this edition of Here’s My Story, or here to visit the My Encounter Blog.

Although I am descended from a traditional Sephardic family, originating in Salonika, I was not given much of a Jewish education as a youngster. It was not until I enrolled in college that I began thinking about religion and asking questions, though, at first, I found little in terms of answers.

And then I came across Chabad Lubavitch. in the early 1960s I was in graduate school at Penn State, pursuing a Ph.D. in psychics, and I was greatly disturbed by some of the ideas that were taken for granted in academia – that we human beings are just a speck of matter in the cosmos, and that there is no special meaning or purpose to life. It was right at that time that the rabbi of the Hillel House on campus brought in a group of Chabad chasidim to help enliven Shabbat for the Jewish students, which they certainly did – I remember especially the songs they sang. But what impressed me more than anything was that these chasidim were totally unapologetic about being Jewish – in fact, they were the first Jews I’d ever met who actually seemed to be happy about it.

The following week I had a test in advanced mathematics, but I couldn’t concentrate on my studies, and I couldn’t sleep. I confided my feelings to the Hillel rabbi who recognized a spiritual yearning within me; he even voiced the opinion that it might be a good idea for me to study in a yeshivah for a time. But the best thing he did was to arrange an audience for me with the Lubavitcher Rebbe.

That audience lasted over an hour. I remember that the Rebbe took great pains to make me feel comfortable. I think he understood right at the outset what my problems were, and why I felt so conflicted about being Jewish. He said to me, “A Jew has to be at one with G-d and His Torah before he can feel whole. Without that, he is not going to feel like a complete person.”

I walked out of that audience knowing that somehow my life had been changed forever. And indeed it was. For one thing, I decided to enroll in the Chabad yeshivah, a move the Rebbe encouraged – although he urged me to first finish out the semester at Penn State. He also warned me that adjustment to yeshivah life would be a challenge for me. He said, “For the first six months you should not ask yourself what you are doing in yeshivah, because you will not be able to answer that question.” And that proved exactly true.

My family was not happy that I was interrupting Ph.D. studies to enroll in yeshivah, and they were worried that I might have gone off the deep end, but I was determined, and they didn’t stand in my way.

A few weeks into my yeshivah studies, Rabbi Hodakov, the Rebbe’s secretary, asked me if I could set up a Torah learning program for college students during the winter break. I responded that I didn’t think that students would give up their entire vacation to sit and learn, but they might come for a weekend. He gave me the authority to do as I saw fit. I engaged several others in the project, including Rabbi Shmuel Lew. We called it “An Encounter with Chabad” or Pegisha Im Chabad.

Although we had no experience in doing this kind of thing, we got a list of all the Hillel houses on college campuses in the country, and we sent out flyers. Seventeen students came to that first session of what turned out to be a highly successful program, with hundreds of students attending annually.

I wrote a letter to the Rebbe afterwards explaining how it went, and I also said that I thought that Chabad could have a major influence on Jewish college students in America – which it has had, of course!

A while later, I took a few days off from yeshivah to visit some of my friends at Penn State. Before I left, the Rebbe called me into his office and asked me to speak to them about Purim, which was coming up shortly.

I told the Rebbe that I didn’t feel comfortable doing that as I didn’t want to set myself up as an example to others. In response, the Rebbe said to me in very clear, unmistakable terms, “Every Jew is an example, whether he likes it or not.” So I did as he asked. I spoke and was surprised that people were very interested to hear what I had to say. They were actually intrigued by my whole experience (although one friend, a psychology major, suggested that I needed professional help). But the head of the physics department, a religious Catholic, gave me a blessing; he said, “G-d should bless what you are doing.”

All in all, I spent a year in yeshivah. Toward the end of the year, I had another audience with the Rebbe, and he told me to go back and finish my Ph.D. I said that I was thinking of staying on in order to get my rabbinic ordination and become a Hillel rabbi, but the Rebbe disagreed with that plan. He said, “You’ll do more for the Jewish people with three initials after your name. You’ll have more influence as a Ph.D. than as a rabbi.”

He even offered to lend me money so that I could return to my studies, and he also mentioned several universities that I could transfer into so that I could maintain my connection to the yeshivah – such as Columbia U and NYU; he seemed well versed in their programs of study. As it turned out, I was offered an assistantship at Penn State so I didn’t need to borrow money, and I completed my studies there.

For a number of years, I continued to run the Pegishas, the “Encounter with Chabad” programs, which I found personally very rewarding, because I could literally see the lives of the participants changing as a result of these experiences. The Rebbe encouraged me very much in this, and he urged me to make the topics for the weekends relevant and appealing. He was very pleased when we organized one program around science using quantum mechanics as a metaphor to explain parts of the Tanya.

At Penn State, I taught undergraduate physics for a time, and I well remember the first time I walked into class with a beard and yarmulke, and saw that the Jewish students were smiling. After I got my degree, I used to get a lot of attention at scientific conferences because of my Jewish garb, as there were not many Torah-observant scientists back then. One of the great advantages of this was that people always remembered me and that led to many positive turns in my career.

Eventually, when I became involved in solar energy, I became quite successful. I developed an international reputation, becoming well-known in the field, which I think was what the Rebbe foresaw when he steered me to complete my Ph.D. rather than pursue rabbinic ordination. He understood the impact it would have on me personally, and also on the many people I encountered. As the Rebbe told me, “Every Jew is an example, whether he likes it or not.”