« Weekly Unique Photo of the Rebbe
25 Years Ago Today: ‘Do All You Can to Bring Moshiach’ » 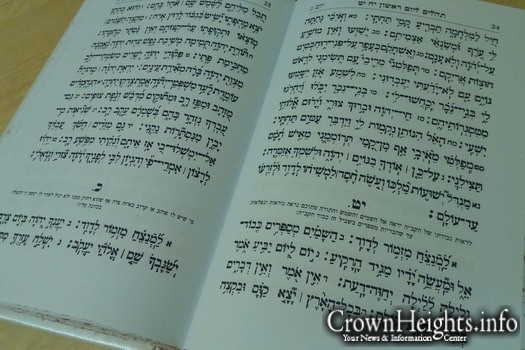 When Reb Yisroel (Izzy) Rosenfeld left his Yeshiva in order to learn in Tomchei Tmimim 770, it was because he was drawn not only to the Rebbe but he wanted to learn Chassidus. Not only was he punctually on time every morning and evening, but often he would stay late to review what was learned and gain a deeper understanding.

So on his first Shabbos mevorchim in 770, he was sitting in his place before 8:00 in the morning and studying a maamar. At 8:00, the minyan began saying Tehillim and a member of the hanhalah came over to him and said, now is time for saying Tehillim.

While this bothered him, he dutifully listened to what he was told to do, closed the sefer and recited the entire Tehillim together with the minyan, followed by Shacharis.

Sometime later he had the opportunity to ask the Rebbe something, and he utilized that time to also discuss this point. He said, “Rebbe, I understand that many baalei batim are not well versed in the teachings of Chassidus, so one Shabbos a month, they should do something extra. And therefore they recite the entire Tehillim. It is proper that at the beginning of the month we remind ourselves to do more.

However, I who enjoys studying Chassidus and learn it every day, why should I stop learning in order to say words?  Yes they are the words of Dovid hamelech, that he wrote in sefer Tehillim, but  Chassidus gives me so much more. After learning a maamar, I actually daven with a geshmak etc.

The Rebbe responded, in general a person uses their money to pay everyday expenses. However there are times that someone takes his hard earned money and puts it in an investment. Yes, he knows he won’t see any benefit from it in the next few weeks, months and possibly years, but he is happy to do so knowing that in the long run this money is a worthwhile investment, that will benefit him in the future.

The same is here; you learn Chassidus every day in order to inspire you to daven better and serve Hashem on a higher level. But saying Tehillim on Shabbos mevorchim, is an investment for the future, for Children who will grow up and develop as a Yid wishes, and all that one desires.”

So this Shabbos and every Shabbos mevorchim, let us be there!

Dear reader, I hope you have enjoyed these stories. At the same time I am asking you to please help my Yeshiva by participating in their annual chinese auction at www.ulyauction.com.

Sholom Avtzon, I can be reached at avtzonbooks@gmail.com

« Weekly Unique Photo of the Rebbe
25 Years Ago Today: ‘Do All You Can to Bring Moshiach’ »