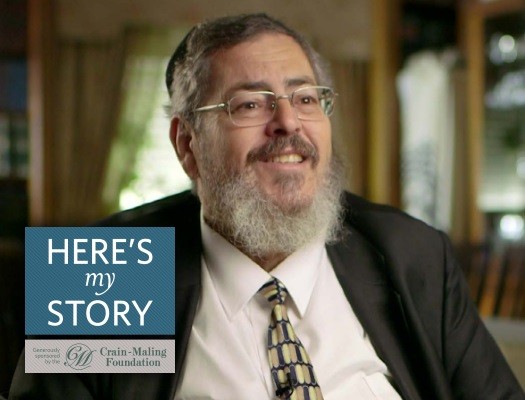 A former Knesset member, Rabbi Yehoshua Pollak served as Deputy Mayor of Jerusalem for 12 years. Now retired from public service, he resides in Jerusalem, where he was interviewed by JEM’s My Encounter with the Rebbe project in February of 2016.

Click here for a PDF version of this edition of Here’s My Story, or here to visit the My Encounter Blog.

I was born in 1948 in Oradea, Romania, which was known among the Jews as Groysvardeyn. When I turned 13, right after my Bar Mitzvah, my family immigrated to Israel, where I attended the Ponevezh Yeshiva. After I got married in 1971, I continued to study Torah at the Rav Kook Institute in Jerusalem, and I became involved in politics.

In fact, I participated in the elections of 1976 as a delegate of the religious party, Agudat Yisrael.

In 1981, I was appointed to the Religious Council of Jerusalem, which oversees all the religious issues in the city such as marriage, burial, certification of kosher restaurants and the like. A few years after my appointment — in 1987 — I came to the United States to visit my younger brother, travelling together with the late Rabbi Dov Rabinowitz, a fellow Council member. While we were in New York, he suggested we go meet the Lubavitcher Rebbe on Sunday, when he was receiving the public while handing out dollars for charity.

At first I declined, but he persuaded me that it would be an interesting experience. We traveled to Chabad Headquarters at 770 Eastern Parkway in Brooklyn, and dutifully stood in line with the rest of the crowd. When we finally reached the Rebbe, he gave us each a dollar and blessed us for success. But then Rabbi Rabinowitz introduced me by name, noting that I was a member of the Religious Council of Jerusalem. Hearing this, the Rebbe looked at me and said, “As a representative of the Religious Council of Jerusalem, don’t forget to be the guardian of Jerusalem.”

In response, I asked him, “How can I be the guardian of Jerusalem? I take care of kosher issues. I don’t have a role in other matters.”

But he repeated it: “Don’t forget to be the guardian of Jerusalem,” and he gave me another dollar.

I thought nothing of it until some fifteen years later when I was appointed deputy mayor of Jerusalem. As such my responsibility became overseeing the Planning and Building Committee of the city.

At the time, a controversial plan came up before my committee. This plan called for building a large new Arab housing project in French Hill, the East Jerusalem neighborhood which adjoins Hebrew University on Mount Scopus. Now, I have always behaved in an honest and fair manner with Arabs who wanted to advance and who had no ill will toward Jews. But these Arab developers wanted to put up many small houses — only one or two stories high — over a large area. I suspected that they were trying to grab the most amount of land with the limited number of homes permitted.

I said, “Why not conform with what is being done in Jewish neighborhoods, where every bit of land is used to the maximum, and where all new buildings are four to six stories high?”

This caused a big argument, but I would only approve their plan if they followed the principle of maximal land use. As this dispute was going on, I suddenly remembered the Rebbe’s words to me back in 1987, when he told me to be a “guardian of Jerusalem.” And I realized that this was my task right now.

This realization and the Rebbe’s words strengthened my resolve. I used all the influence I had to make sure that this development was not a land grab — that the maximum amount of apartments would be built on a minimum amount of land, and not the other way around. I was determined to do the best thing possible as the “guardian of Jerusalem.”

Although I am descended from Lithuanian ancestors who were opposed to Chassidism, I admired the Rebbe greatly. I would like to relate another story told to me by the respected Israeli rabbi, Moshe Adler, who also served on the Religious Council of Jerusalem.

Shortly after the Six Day War, Rabbi Adler met with the Rebbe who asked him where he lived, and Rabbi Adler gave his address on the outskirts of Jerusalem. And then the Rebbe asked where Rabbi Adler prayed, and he answered that he prayed at the Western Wall, known in Hebrew as the Kotel.

So immediately the Rebbe wanted to know which way Rabbi Adler walked on Shabbat in order to arrive at the Kotel. Rabbi Adler named the streets along the route he followed through the city. Hearing this, the Rebbe became very animated and said, “But if you walked another way, down Shmuel HaNavi Street and through Damascus Gate, then it wouldn’t be such a difficult, uphill walk. You won’t feel it as much.”

Now, the amazing thing is that the Rebbe never visited Jerusalem, or Israel for that matter. How did he know this?

My answer is that a man who connects with every step of every Jew, can tell another how to go — just as he told me what my mission in life was, even though I myself didn’t realize it for fifteen years.