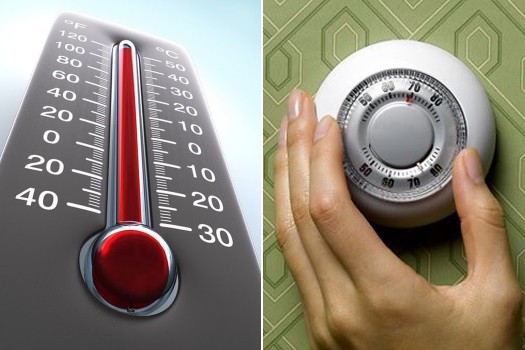 As chassidim around the world celebrate the yom habuhir of Yud-Aleph Nissan, its main purpose is to learn from the Rebbe and emulate at least one act of his. Everyone is aware that on every Sunday (for some years) the Rebbe would stand by the door of his room and give dollars and berochos. He explained it with the following adage, “When two Jews meet, the accomplishment should be beneficial even to another Jew.

With that in mind I present to you the following story.

When I first heard that question, “Are you a thermometer or thermostat?” I looked up in surprise. What is the message that Rabbi Shmuel Lew is trying to impart at the farbrengen. But when he began explaining it, it all made sense.

Just as a thermostat that is connected to the boiler, brings warmth into a cold environment, and warms up an entire house or building complex, so too we who are connected to Rebbe and have the ability to bring warmth and inspiration to the community in which we live. We can influence them not to focus on everyday mundane manners, but also on something more spiritual.

Hearing this thought, I was reminded of a story that the Frierdiker Rebbe related about the esteemed chossid Reb Pinchos Reizes:

In the city of Lubavitch lived a wagon driver by the name of Nochum Nochumavitch. One ordinary weekday, Nochum entered the shul when Reb Pinchos was in the middle if his davening. Listening to Reb Pinchos’ davening inspired Reb Nochum that he also had an urge to pour out his heart to Hashem.

The simple wagon driver took out a siddur and turned to the musaf service of Yom Kippur. He recited the Avodah with great concentration, he cried emotionally when he recited Al Cheit, and he fell to the floor for Korim. Even though he was an unlearned person, at that moment he reached a lofty level.

When Nochum the wagon driver finished his davening, he exclaimed, “I can no longer be on the same level as the horse!” He felt that he could not remain on the simple ordinary level of the past. He gave up his job as a wagon driver and found a position as the shames (caretaker) of a The Frierdiker Rebbe concluded this story by quoting the Mitteler Rebbe, “Even a great Talmudic genius would envy the level this simple Jew attained.”

Reb Pinchos didn’t look around to see, how many other Jews are willing to daven at length. He knew that was what he was supposed to do. He didn’t do it to impress anyone, because no one was there. He conducted himself that way, because that is how a chossid of the Rebbe conducts himself.

And that is being a thermostat. We set the heat at the level we should be, and that itself influences and

But we may ask, “How can one person influence his surroundings and not be influenced by it? I am only one and they are so many?”

The answer to this question was taught by chassidim using a Halacha about salting meat.

Shulchan Aruch notes a phenomenon that as long as the meat is spewing out blood, it won’t absorb any of the blood that came out from the pieces around it. However, after the meat completely finishes its discharge, it will absorb the other blood to the degree that salting it cannot draw it out.

The same is true for a person: If he is preoccupied with davening, learning and elevating others, this will prevent him from “absorbing” outside influences.

When the noted chossid Reb Itche der masmid, came to America in 5700/1940, to collect money for Russian Jews, he barely went around to collect. In the morning, he would go to shul and daven Shachris with the minyan, but would continue on for many hours.

The shammes of the shul would want to lock up right as davening finished, but would respectfully wait for the last person to finish his prayers. So around ten minutes after the final kaddish, he would usually lock up. But on that day, ten minutes passed, twenty minutes passed, half an hour, and their guest was

When two hours passed, he came near and heard that the guest Rabbi is in midst of Birchos Krias Shema, he called his friends to tell them of the strange occurrence. People left their businesses to see this for themselves. Either this man must be one of the tzaddikim they heard about and they wanted to request a blessing from him, or the shammes is making up things and has to be replaced.

Seeing such a davening, they resolved to give him much more tzedaka than they would have had he come to their house. Furthermore, many of them used the opportunity to speak to him on how to conduct themselves in America. In fact a few hundred shuls adapted Nusach HaAri as their nusach as an expression of their tremendous respect and the impact he had on them. Not by giving a talk in the community, but simply by being himself.

The same apply to us, we all are the Rebbe’s chassidim, Yes there are the thousands whose entire life is dedicated to fulfill the Rebbe’s mission and there are thousands who attain that status periodically, during moments that we inspire another Jew to put on Tefillin, place kosher mezuzos on their doorposts or fulfilling any of the other mivtzoyim. We all can and must strive to be a thermostat, and inspire and indeed influence another Jew to come closer to Hashem.

And then there is another point.

Notwithstanding the above points, there is perhaps another, more important, lesson to be learned from the story of Reb Pinchos Reizes. Perhaps the point of the story is not about the greatness of Reb Pinchos, to who it may be difficult for us to relate, but to the simple wagon driver. As the Frierdiker Rebbe concludes this story with the statement that “Even a great Talmudic genius would envy the level

One may ask, what did he do that was so special? He actually davened the wrong tefillos and then took on a different job! What is the greatness in this? But perhaps the lesson is not in what he did, but what it took for him to do it.

We often wonder: Hashem is so much greater than us, how do our actions really have meaning to Him? We read in davening that He is exalted and far above this world, and that this world was created with His words alone. How can our actions be meaningful to Him?

Chassidus explains that a person speaks and a parakeet can say a few words. Yet, when a person speaks it doesn’t excite anyone (unless it’s your child’s first words), but when the parakeet mimics a person it evokes glee. Why the difference?

The explanation is that something unexpected is exciting. Since it is not surprising for a person to speak it doesn’t excite us. But when a bird speaks our language, it causes laughter and joy among the listeners.

The same is true for our service of Hashem. In essence, Hashem is far greater than our actions. Yet, He chose to derive enjoyment from our kabolas ol. Our service may not be anything extraordinary, but when we change our activities for the better and do something unexpected, then, like a talking parakeet, we cause Hashem tremendous joy.