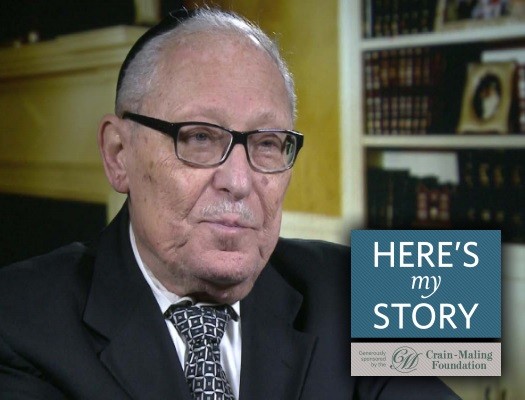 Rabbi Chaim Meier Halon currently lives with his family in Oak Park, MI. He was interviewed in the My Encounter Studio in February of 2013:

While I was studying at Yeshiva University – in YU’s rabbinical seminary, known as Yeshivat Rabbeinu Yitzchak Elchanan – I became friendly with another student who was a Chabadchasid. He urged me to join a weekly group that was studying the Tanya, authored by the 18thcentury founder of the Chabad Movement, Rabbi Schneur Zalman of Liadi. At first I wasn’t interested, but he kept telling me how eye-opening the Tanya was and finally he convinced me.

He was right – I found the material most absorbing. Previously, I had studied other classical works of Judaism, but I had never encountered any teaching like this in my life. As well, the teacher, Rabbi Berel Shemtov, was excellent; he explained this complex work in a most interesting way.

I demurred. “Why go see the Rebbe? What am I going to discuss with him?”

“You will see a great leader,” he replied, and before long he made an appointment for me.

I had previously been to a farbrengen, shortly after the Rebbe assumed the leadership of Chabad in 1951, but I hadn’t formed any kind of opinion about him. I remember that he spoke at length and that I didn’t understand everything he said because I was not familiar with the idioms of Lubavitch then.

But what I liked was that he related the topic – whatever it was, current events or another mundane matter – to Torah. That made a big impression upon me, because I had seen many Rebbes before, who modelled the way of G-d, but who didn’t relate the realities of modern life to Torah.

Of course, hearing the Rebbe speak was not like meeting him in person. And when I did meet him I was pleasantly surprised by how warm he was. He greeted me with a big, beautiful smile, shook my hand and spoke to me in a very cordial and friendly manner.

Now, before I describe what happened in that meeting, I have to mention that, in 1951, my sister became engaged to a Lubavitcher chasid from Montreal by the name of Nosson Felig, who brought her to the Rebbe for a blessing. During that audience, the Rebbe spoke with my sister in Yiddish, a language which she speaks perfectly, and asked her in great detail about our family, before giving her a blessing. She told me all about it afterwards.

Now, three years later, when I came it to see the Rebbe, the first thing he said to me was, “I began a certain conversation with your sister and I would like to continue it with you.”

I looked at him in amazement. An inconsequential young girl came to see him; he asked her a few polite questions, and he remembers it all three years later!

And then he went on to ask more questions about our family – our lineage and background – and also specifically about me. He wanted to know why I had chosen to attend the rabbinical seminary of Yeshiva University, and he also asked many questions about the school.

Later I learned that, before the war, the Rebbe had attended classes at the University of Berlin together with my Rosh Yeshiva, Rabbi Joseph B. Soloveitchik. So perhaps this is why he was so curious.

When I came out of the meeting, Rabbi Shemtov was waiting for me and he remarked, “I’ve been a chasid since the day I was born, but I have never spent more than ten minutes with the Rebbe. Yet you go in and get an audience lasting more than a half hour. How much did you have to tell the Rebbe?”

I said, “I didn’t have much to tell the Rebbe. I only answered the questions the Rebbe asked.” But the fact that he took so much time with me made me feel special.

In 1957 I got married, and before my wedding, I came to see the Rebbe for a blessing. It happened to be during Chanukah and the Rebbe was handing out silver dollars to Chabadyeshiva students. People encouraged me to get in line as well, but I felt awkward. I said, “I am not a student in the Chabad yeshiva,” but they kept pressing me, so I finally got in line, but I made sure I didn’t take anyone else’s place – that I was the very last one. When the line ended and I finally came up to him, the Rebbe said to me, “I want to see you later.

When I came into the Rebbe’s office, I showed him the ketubah, the marriage contract that I would be giving my bride and also the ring. He blessed me and wished me a Mazal Tov, and then he took out two silver dollars and said to me with a big smile, “Since it is not proper for a groom to give a monetary gift to his bride before the wedding, do not give this to your bride now. But you understand what you have to do with it.”

Of course, I understood. One silver dollar was meant for me and the other I was to give to my wife, which I did, after we were married. We still have them and we would never part with them. On various family occasions we have given silver dollars to our children, but never these two. These two belong to us and we treasure them along with the Rebbe’s blessing and the Rebbe’s memory.