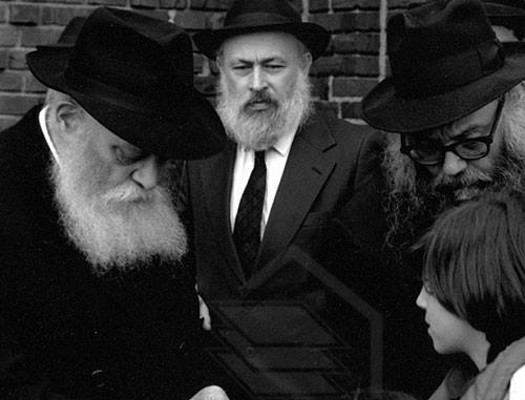 The Rebbe on that fateful day shortly before going to the Ohel, as Rabbi Yehudah Krinsky stands beside him.

Today, the 27th of Adar I, marks the day the Rebbe suffered a stroke in 1992. The Rebbe’s personal secretary, Rabbi Yehudah Krinsky, described the events of that fateful day in vivid detail, which we share with our readers courtesy of Lubavitch Archives.

As told by Rabbi Yehudah Krinsky:

I started driving the Rebbe to the Queens cemetery as a student. I already had a driver’s license back in 1951, 1952, when I was very young. I don’t know why. I didn’t have or need a car. I guess it was somewhere in G-d’s Divine plan. In those days, the Rebbe would go to the ohel, the sixth Chabad Rebbe’s resting place, very rarely and not stay there for a long time — not like in the later years.

I drove him almost every single time, thousands of times, summer, winter, rain or shine. I would park the car near the Ohel. During the library trial, in December of 1985, when I had to attend the court proceedings every day, as I was the one who had signed for the plaintiff on record–my colleague, Rabbi Klein, went with the Rebbe to the Ohel.

The Rebbe was very non-demonstrative, as was the case even at prayer during which he davened [prayed] quietly and with an essential serenity. This hanhaga [way of prayer] was the same at the Ohel. You saw nothing irregular. It was obviously a very spiritual laden visit, and what transpired was clearly between him and the Frierdike Rebbe.

Sometimes he would call me over to give me something or instruct me to call in to the office that something should be taken care of. I had a telephone in the car; we didn’t have cell phones then. I had a whole communications unit in the trunk of my car.
Usually I took along loads of work. I kept a portable Hebrew typewriter in the trunk, and often an English one as well. I would do a lot of typing while there and a lot of calling when we installed the car telephone, communicating back and forth.

We had many conversations in the car. If we were in middle of something before the Rebbe went to the ohel and he wanted to know the outcome of something and he hadn’t had a chance to hear it before, that was something we obviously discussed.
The last time I drove the Rebbe to the ohel, the day of the stroke, he spoke more than usual. He said various interesting things that I am not at liberty to share, but which retrospectively I find quite momentous.

On Monday, Chof-Zayim Adar I, March 2, 1992, at twenty to six in the afternoon, shortly before the time I expected him to leave the Ohel, the resting place the sixth Chabad Rebbe, the Rebbe suddenly was not well. I tried to communicate with him, but he was nonresponsive. I understood what had happened. I’ve seen stroke victims before. We were out in the cemetery alone and I knew it was extremely serious. I called the main office at 770 right away and told them to send Hatzolah immediately.

Unfortunately, things didn’t move fast enough, and Hatzolah couldn’t get their ambulance through the cemetery’s narrow paths. And then, as they were trying, the battery of their vehicle died. It was terrible. I was reluctant to move the Rebbe myself, so I called desperately to 770 again and again and finally after an hour and half the Hatzolah from Crown Heights arrived. You would think that by the Rebbe there couldn’t be such mishaps.

The Rebbe never spoke again. Approximately two-and-a-half years later, his condition deteriorated and he was hospitalized in Beth Israel Medical Center. On Motzaei Shabbos Kodesh, Gimmel Tamuz 5754, 1994, I stood next to the Rebbe’s bed with three other people, when at ten minutes to two in the morning, the Rebbe passed away.