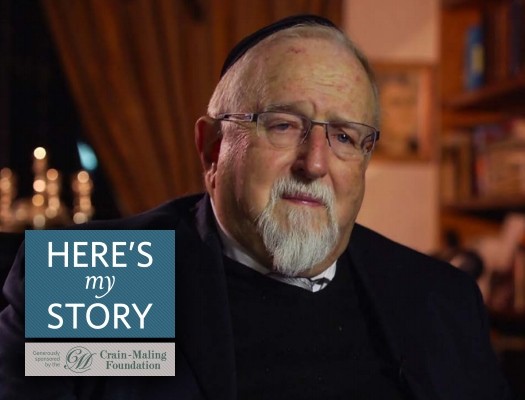 Rabbi Avrohom Tanzer is the Rosh Yeshiva of the Yeshiva College of South Africa, and the founding rabbi and spiritual leader of the Glenhazel Area Hebrew Congregation in Johannesburg. He was interviewed by JEM’s My Encounter with the Rebbe project in Johannesberg in August of 2014.

I was born in Williamsburg, Brooklyn in 1935, a few years before the start the Second World War. As I was growing up I witnessed an influx of Chassidim and their Rebbes – Satmar, Belz, Lubavitch – into Brooklyn. So I got a good taste of Chassidic life at that time.

However, I did not pursue Chassidic life. In fact, when it came time to go to yeshiva, I went to Telz in Cleveland where I stayed for 13 years – from 1950 until 1963. Telz is affiliated more with the non-chasidic “Lithuanian” style of Talmudic study. I left when my rabbis at Telz encouraged me to spend a couple of years teaching in South Africa, where there was a crisis in Jewish education.

In December of 1966, I began to plan a visit to the United States. One of the items on my agenda was to find someone to head the girls’ high school, and I was hoping to find a suitable candidate in the US.

While in South Africa, I had befriended the Chabad emissaries there, and they encouraged me to see the Rebbe. So I decided to make an appointment, and I hoped the Rebbe might also help me with a recommendation with regard to the position in the high school.

While meeting the Rebbe, I was most impressed with his overwhelming personality. There was no question that he was an intellectual giant – a truly great man. But he also had an ability to see through people that very few have. And when speaking to him, I had a sense of being acknowledged and understood.

I read an article in Jewish Action by Rabbi Johnathan Sacks, the former Chief Rabbi of England, describing his first meeting with the Rebbe. He was a philosophy student, and he planned to interview the Rebbe. But, before he even realized it, the whole interview had been turned on its head and the Rebbe was asking him questions and urging him to get involved in Jewish outreach.

The Rebbe did the exact same thing with me.

As for my dilemma in finding someone to run the girls’ high school, the Rebbe was very empathetic. He said, “You know, there’s a shortage of good people everywhere in the world, including in the United States. So you’d better forget about that. You’re not going to find anyone here. You’ve got to do it yourself.” That was his answer to me.

Then he asked me what else I was doing in South Africa. I told him that I was busy with the various schools – the elementary school, the high school, the Yeshiva College – and that I was also involved in building a new synagogue. When he heard that, the Rebbe said something to me that I will never forget, something which I have quoted many times to others. “You realize that heading a school is very different than leading a congregation. In fact, these two are opposites and can be in conflict with each other.” Then he went on to explain:

“The head of a school, a rosh yeshiva, has to have his eyes on Mount Sinai. He has to represent Torah to his students, and he has to inspire them; he has to lift their standards and connect them to heaven. The rabbi of a congregation, on the other hand, has to have his feet firmly planted on the earth. He has to understand exactly what is happening in the society around him and respond to the realities of life that his people confront daily.”

I never forgot that insight. Throughout the 50 years I spent in South Africa, I’ve been both a rosh yeshiva and a community rabbi, but I always remembered that this is a distinction to always keep in mind.

Although I met him only that one time, I could see that the Rebbe cared deeply about the Jews of South Africa. But truly, he really cared about Jews everywhere. His greatness was that he cared about the whole world.