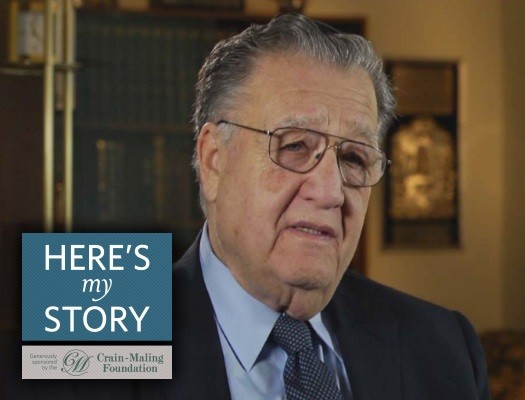 Rabbi Rafael Grossman spent most of career in the rabbinate as the head of Baron Hirsch Synagogue in Memphis, Tennessee, where he led the largest Orthodox congregation in the United States. He is presently Senior Rabbi Emeritus. He was interviewed by JEM’s My Encounter with the Rebbe project in January of 2012.

When I was a boy, my father – an immigrant from Bialystok, Poland – accepted the post as a rabbi of a synagogue in Borough Park, Brooklyn. This was in the early 1940s, and this is when I first encountered the world of Chabad-Lubavitch.

I attended the Chabad elementary school on Dean Street, where my teacher, Rabbi Meir Greenberg – who later became my brother-in-law – was very concerned about my hearing. Indeed, I was nearly deaf and the doctors whom my parents consulted recommended surgery. So Meir decided to bring me to the Previous Lubavitcher Rebbe for a blessing that the operation should go well.

I remember the encounter vividly. I remember that the Rebbe’s gaze was very intense but that he also looked at me with great compassion. He smiled kindly and told me not to worry, that I would hear again. As it turned out, the surgery was successful, and I was able to hear quite well afterwards.

A few years later, my family moved to New Jersey, and although I came to Chabad Headquarters from time to time for farbrengens, I was not part of the Chabad world.

I got married and became a rabbi of a synagogue in San Antonio Texas, and later in Long Branch, New Jersey. While there, my oldest daughter became very sick, and I contacted the Rebbe – this time the last Rebbe, Rabbi Menachem Mendel Schneerson – for his blessing. He urged me to go to California to see a physician there who was world renowned. This physician helped her, and she recovered for a time, but after five years – at age seventeen – she passed away.

When that happened, we decided to establish a high school in her name in Deal, New Jersey. But there were complications from the start, as some of the donors wanted a co-ed school, and we wanted a girls’ school. And then there was the question of the site itself. We found a beautiful mansion that was the perfect building for the school. But the Jewish neighbors opposed the idea, fearing the value of their properties would go down.

I went to see the Rebbe about this, and he advised me, not do it. He suggested that I find another location. But I couldn’t let it go – it was such a perfect property and the price was right. So I argued with the Rebbe: “They are secular Jews. They are assimilated people.” Still, the Rebbe insisted, “Don’t do it.”

“The day may come,” he explained, “when one of their daughters will want to enroll in your school but they will be too angry to let her. They will have hard feelings about how the school changed their neighborhood and hurt their property values. Respect their feelings – don’t do it.”

So, with a heavy heart, I decided not to buy that property. Today I can say that the Rebbe was a thousand percent right. Eventually, the objectors moved out, and the neighborhood changed. The newcomers would have been even more hostile to such a school, and it would not have generated Jewish unity at all.

Eventually, after I had already left New Jersey, the community  established a girls’ school in another location. It is not in my daughter’s name, but it’s a good school and it is successful. So the Rebbe was totally correct in his advice. He was incredibly insightful and so sensitive to the feelings of estranged Jews, and how their potential return to Yiddishkeit might be adversely affected by well-meaning but poorly thought out actions.

During the time I was still in New Jersey, I became active in the Rabbinical Council of America (RCA), a move that the Rebbe supported. When I became president of the state RCA branch, the Rebbe said to me, “The rabbinate today is different. It’s not a job like in the old days. Today you can’t sit in a synagogue and wait for people to come. You have to reach out and inspire. And remember that every Jew has been taken out of the flames of the Holocaust or from the flames of assimilation. Be mindful of all those you come across and how you affect them.”

I took his words to heart, especially when I moved to Memphis after my daughter passed away. At that time, I felt the need to change locations for the sake of my entire family. People were kind to us of course – in fact, they were too kind. Every day, we heard, “I am so sorry for the loss of your daughter … or for the loss of your sister.” And it was just too painful to be constantly reminded of it.

When I was offered the post, I went to see the Rebbe to ask him if I should accept it. This was when I was still hoping to establish the high school in my daughter’s name, so I was vacillating. His words showed his profound insight: “We honor our deceased loved ones in the best way not by writing their names on buildings, but by our accomplishments. That is the most meaningful way to perpetuate someone’s name. That’s the Torah way.”

Before I left for Memphis, the Rebbe gave me a blessing, and he said that I should expect problems from two members of the congregation. He did not name them but he did name the positions they held in the community. He went on to say, however, that I would overcome these problems and succeed.

As it turned out, he was completely right. I was there almost thirty years. During that time, the neighborhood changed, and we had to build a new synagogue. There was an element in the community that did not want a new Orthodox synagogue, but I was able to overcome these obstacles with great ease and to proceed with the construction.

All the while the Rebbe’s blessings were with me – and the Rebbe’s words, his advice and his insights sustained me.