« Rabbi Benny’s Weekly Torah Thought: The One with the Mexican Linguist
Picture of the Day: Kinus Hashluchos Group Photo! » 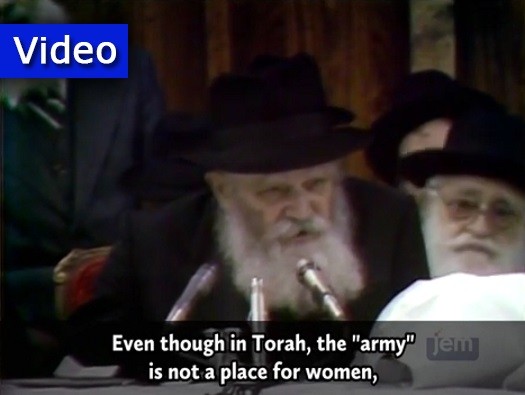 Amid the ongoing debate surrounding the role of women in the military, JEM brings the Rebbe’s words on the topic.

“When it comes to a battle of life and death – and the battle against the evil inclination is a battle of survival – Jewish girls are equal members.”

The Rebbe emphasizes that “Jewish girls must know the great merit they have – not only for themselves and their friends, but that they also pave the way for the boys to accomplish what they have to.

Nowadays, a large portion of Jewish education is in the hands of women and girls, who educate and guide Jewish children, including boys, in the study of Torah and fulfillment of Mitzvos. It is they who are preparing “G-d’s Legions,” the children, to greet Moshiach.”

« Rabbi Benny’s Weekly Torah Thought: The One with the Mexican Linguist
Picture of the Day: Kinus Hashluchos Group Photo! »