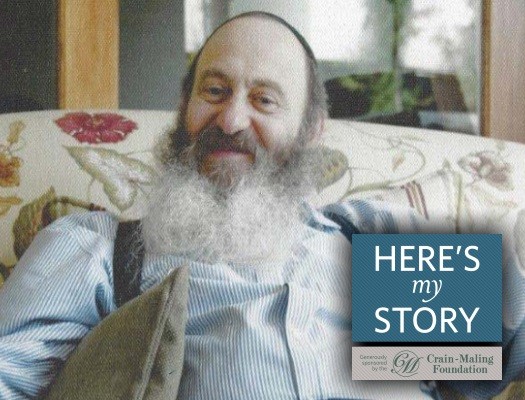 Mrs. Jenni Unterslak has been part of the Chabad community in Johannesburg, South Africa, for the last thirty-seven years. She was interviewed by JEM’s My Encounter with the Rebbe project in August of 2014.

I would like to tell you the story of how my late husband, Dr. Rodney Unterslak, and I started on the path toward Yiddishkeit, and the role the Rebbe played in our journey.

In 1975, after a relationship of six years, Rodney and I married. At the time, we had absolutely no connection to Judaism, other than the fact that we both came from traditional Jewish families and both of our parents had made us very keenly aware of our roots.

After we were married for about three years, Rodney was called up for military service in the South African army. At that time I was pregnant with our first child, and we decided to avoid the draft by immigrating to London, where Rodney was offered an attractive teaching position at a prestigious hospital.

Before we left South Africa, our daughter was born – this was in January of 1978 – and, on an impulse, Rodney decided to do something most unusual for someone not the least bit observant. He went to synagogue to name the baby during the Torah reading.

Six weeks later we arrived in London, where we opted to share a house with a couple – Alon and Rena Teeger – who were very dear friends of ours. They had emigrated from South Africa to England several years before us and had become religious there. In order to stay with them, we had to agree to keep the kitchen kosher and not to violate Shabbos in their presence, all of which we were happy to do in order to have their company and guidance in unfamiliar surroundings.

Indeed, when we arrived in London, I was a complete basket casebecause I never really wanted to leave South Africa, where my entire extended family resided. So I was very happy to move in with the Teegers.

The arrangement proved even more satisfactory for Rodney. He began attending Torah classes with Alon, finding, at long last, what he had always been seeking.

One morning after he had gone to a class, I found him washing his hands in the Jewish ritual way and putting on tzitzit (the fringed garment commanded by the Torah). I was not happy about this because I was against this way of life. I was not only uninterested in it, I was rebelling against it. On Shabbos I would write letters, phone my mother and watch television, purposely violating the observance of the day, just to assert myself.

It came to the point that Rodney used to go to synagogue on Shabbos and stay there all day so as not to cope with my resistance. When that happened, our marriage entered a critical stage. Finally, Rodney gave me an ultimatum – if I wasn’t prepared to make an effort to try out this new way of life, he would leave me. That’s how strongly he felt about it.

Then he decided to fly to New York to meet the Rebbe. Before he left, I asked him to take along a letter from me. In this letter, I described how profoundly unhappy I was living in London and how profoundly unhappy I was with the way my life was going in general. I didn’t mince any words – I told the Rebbe that I felt very angry watching the man whom I’d known half my life, turning into someone I just didn’t recognize anymore.

Rodney took the letter and four days later came back with an answer. In his response, the Rebbe had said that he could understand how I was feeling, but that it was incumbent upon me, as a wife, to make the decision where we would be happy living as a family. And once I’d made that decision, then things would be good. He concluded with many beautiful blessings for peace in the home, and for health and success.

I now understood what I had to do to save my marriage. This letter empowered me as a wife and led to the most amazing transformation in the life of our family.

I told Rodney that I wanted to move back to South Africa to which he agreed – even if this meant his going to the army – on the condition that I sincerely try out Yiddishkeit and get involved in the Jewish community once we returned.

Passover came, and I made the greatest effort to learn and keep all the laws of observance of the holiday. It was the most incredible Passover of my life. I loved every minute of it. Then we returned to South Africa.

I felt some trepidation about what the Jewish community in Johannesburg would be like since I never felt any warmth in Judaism while in London, though I must admit that it was a two-way street – I wasn’t very receptive to anything Jewish at that stage.

But things were totally different in Johannesburg. Before we even arrived, Rabbi Sholom Ber Groner of the Chabad synagogue came to kosherize the kitchen in my mother’s house, since that’s where we would be living upon our return. Then – and most amazing of all – when we landed, representatives of the Chabad community were waiting at the airport to welcome us.

I embraced them with both arms. I started going to classes. I became just as involved as my husband. And our lives were never the same.

It wasn’t until ten years later that I had the chance to meet the Rebbe in person. I was passing through New York, and a friend arranged for me to have a short private audience on a Sunday, before the Rebbe started giving out dollars for charity. I had wanted to ask him for a blessing for my husband, who was working very hard as a doctor, giving his all to his patients. I was worried that he couldn’t keep up this pace and that his health would start to suffer.

I went to see the Rebbe with my little daughter Mushky, accompanied by Rabbi Shimon Goldman, who introduced me as Dr. Rodney’s wife. The Rebbe replied, “I know who Dr. Rodney is,” and proceeded to give me all the blessings that I had intended to ask for, though I never even opened my mouth. Then he placed thirty brand new dollars in Mushky’s hand – why thirty, I don’t know. To me he gave seven dollars for my family.

As time passed, I felt only gratitude to the Rebbe for everything he did for me. How different my life would have been if he hadn’t counseled me as he did, if he hadn’t blessed us all like he did. I will forever be indebted to the Rebbe for the part he played in my journey and the journey of my family.