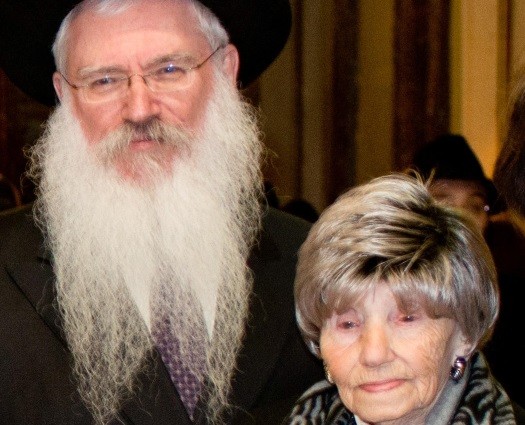 Rabbi Manis Friedman with his mother, may she live and be well.

In honor of his mother’s birthday, Rabbi Manis Friedman relates a childhood memory about his great-uncle Chaim, and the lesson he taught him about how one ought to respect his parents:

Can I tell you a story about my great-uncle Chaim?

“Feter Chaim,” as we called him, was quiet, gentle and special soul. His wife had passed away and he had no children. For many years he would join our family for dinner, but you would hardly know it because he was virtually silent. And even when he did speak it was hard to hear because of how softly he spoke.

He was that kind of man.

So one evening, I am around 11 years old, and my family sits down to eat supper. We ate at the table in the small kitchen in our apartment on President Street. I was sitting at the table and my mother was washing dishes at the sink, immediately behind me, and I asked my mother for a spoon.

To our astonishment, Feter Chaim, who we almost forgot was there, exploded in a single moment of horrified anger. In Yiddish, he sputtered, “Banutzen zich mit’n Mame’n!?” (You’re using your mother!?)

And then, in a moment, it was over. He went back to himself and his plate, and we all stared at each other in utter amazement. The outburst was so unexpected and so out of character that it seared itself in my memory and I remember it like yesterday. And with time, that moment becomes more and more sacred in my memory.

This humble, silent man, couldn’t sit by when a genuine travesty occurred in front of him. A boy asked his mother to do something he could have done himself. Unthinkable.

And yes, to this day, I find it unthinkable to ask my mother to do things for me.

Many children today wouldn’t even be able to identify what offended Feter Chaim even if confronted with it. Because of the reluctance of many parents to train their children to respect and revere them, children plainly and innocently assume their parents are there to serve them, not the other way around.

A child once reassured me that it was no problem in his house because “My mother loves doing things for me.” I reassured him that he had a wonderful mother, and for that very reason she deserves a wonderful child. One who refuses to allow his mother to do things for him that he could do himself.

Your mother is not your maid or your waitress. This is something we need to tell our children. Ideally, we shouldn’t be talking about ourselves. The father should teach it when the mother is asked to fetch something, or vice-versa. (The best thing would be if you happened to have a great-uncle Chaim…)

But one way or another, even if you need to gently teach it yourself, the child desperately needs to be told. Children understand the concept of “unthinkable.” They understand absolute values.

They simply need to be trained that this is one of them.

Too little has been said about the fact that “Honor your father and mother” is in the first five of the Ten Commandments and not the second five; it is on the first tablet, not the second. And while the second contains the human-human rules, the first contains human-G-d rules. Implied in this is that honor for parents should be more like reverence and less like casual friendship.

Our homes are palaces and our parents are king and queen. Not concierge attendants.