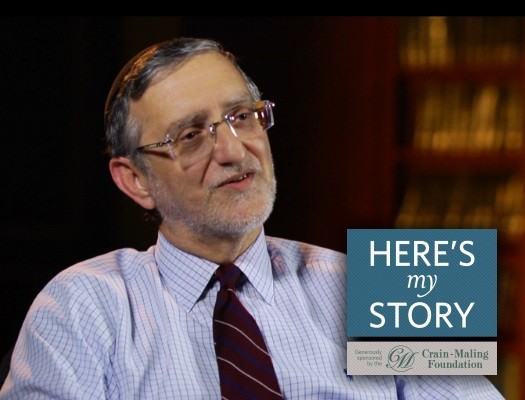 Rabbi Samuel Levine is presently the head of Hillel Day School in Boca Raton, Florida, where he resides. He was interviewed by JEM’s My Encounter with the Rebbe project at Chabad of Boca Raton in March of 2011.

My name is Shmuel Levine. I was born in Germany after the war to Holocaust survivors, who migrated to the United States on the first day of spring in 1949. Although I don’t remember any of it, that’s what I’ve been told.

What I do remember is that the Rebbe saved my father’s life. After the war, my father was a beaten-down man. We were living with my uncle in (Worcester). My father didn’t care about our surroundings at all – as long as there was a roof over our heads and food on the table, that was enough for him. He took whatever menial job did not require him to violate Shabbos. He worked as a tailor and as a presser; he didn’t care about the wage. But this lifestyle was all too depressing for my mother – she said, “I can’t live like this.”

So my father tried starting a business, but he had no confidence in himself whatsoever. He didn’t know what to do or where to turn. And then Rabbi Hirschel Fogelman who is a very dear friend and mentor, somebody that I revere, said to him, “Mr. Levine, you really need to see the Rebbe.”

I vividly remember that first meeting with the Rebbe, even though I was very young – only nine years old – and my brother was not yet three; he hadn’t yet had his first haircut. He had beautiful reddish-gold curly hair and a great smile. I remember my brother  literally climbing on the Rebbe’s lap – and the Rebbe smiling.

In later years, I read The Prime Ministers in which the author, Yehuda Avner, relates how the various Israeli prime ministers came to seek the Rebbe’s advice. And I was reminded of the fact that, although the Rebbe was a world personality, a world leader, he let my little brother climb onto his lap.

I also remember the big smile on his face – for when the Rebbe smiled, it was like the sun shining all its light on you.

In that first meeting, my father’s primary concern was his livelihood. The Rebbe didn’t just answer him off the top of his head. He really thought about it. He leaned his hand on his cheek, thinking deeply, and when he took his hand away there was an imprint of his thumb on his face. My father’s question had been, “Should I buy a cleaning machine? Should I make this investment?” And the Rebbe gave that question so much thought.

From that point on, the Rebbe became my father’s chief advisor. My sense is that there wouldn’t have been enough hours in the day if the Rebbe gave everybody as much time as he gave my parents. But he must have felt that they needed his attention, and that they deserved it after all they’d been through. He helped them, step by step, to heal from their traumas and to live a normal life.

Nothing happened in our household without the Rebbe being informed of it, without his advice being sought. I remember my father sitting by the phone waiting for it to ring. In those days people didn’t use phones the way they do today – a long-distance phone call was an exotic event, something special. And my father would sit and wait for the Rebbe to call back and answer some monumental question.

At one point, my father wanted to form a business partnership with his two young nephews, but the Rebbe said no. My father loved these boys like sons, because they were the children of his sister who didn’t survive the war. When the Rebbe advised my father that this would not be a good idea, he must have been greatly disappointed.

Of course, my father didn’t ask why. But the Rebbe understood his unspoken question and explained himself. His explanation bordered on the wisdom of Solomon. As it turned out, it would have been a disaster in my father’s life to have proceeded down that path.

As well, the Rebbe discouraged my father from moving to New York. My father wanted to live there, among other religious Jews, because he was one of the only observant Jew in Worcester. He was the only one in town who closed his business on Shabbos. Ten thousand other Jews lived there, but he was the only one who did that.

Being the only one who respected Shabbos in town did not make him happy, and he would ask the Rebbe – again and again – to let him move to New York. But the Rebbe said, “No. Everybody has his place, and your place is in Worcester, Massachusetts.”

Clearly, it was my father’s mission in life to prove that you could live in Worcester, own your own business and be Torah observant too.

My father was so bereft – it was such a huge loss in his life, as it was in all our lives.