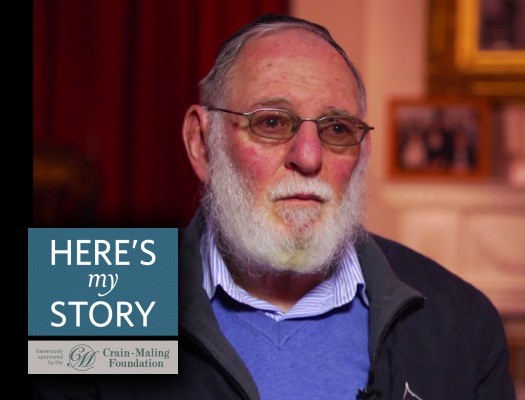 Here’s My Story: A Successful Conference

Sam Orelowitz was interviewed by JEM’s My Encounter with the Rebbe project in his home in Johannesburg, South Africa, in August of 2014.

I come from Johannesburg, South Africa, where I have been in the insurance business since 1964, and where I first became involved with Chabad. Although I was not observant back then, Judaism mattered to me. When my wife and I got married in 1976, we decided to keep a kosher home.

I first met the Rebbe in 1977. I had come to New York for a business conference organized by the insurance company which was employing me at the time. The company was dominated by Jews, none of whom was observant. And they’d scheduled the conference over Shabbat, just before Passover.

I participated in a part of the conference, but in middle I went off on my own. Instead of joining the others, I came to Brooklyn to see the Rebbe.

At the time, there was a possibility that the company would be sold. Like all the employees, I was unsure what to do if that happened. Should I stay or leave? This is what I wanted to ask the Rebbe.

I had never met the Rebbe before and, while I awaited my turn, I was a bit anxious. I didn’t know what to expect and what the outcome would be. I had written out my questions and given them to the Rebbe’s secretary.

My anxiety was further increased by the instructions I received: “A lot of people are waiting. Hand the Rebbe your letter, and don’t say anything. The Rebbe will respond to you. So as not to take up a lot of his time, speak only if the Rebbe asks you a specific question.

When I went in, I saw the Rebbe gazing at me with those pure blue eyes of his, and I just froze. Then I saw him reach into a pile of papers on his desk, and extract my letter from the middle of this pile. How did he know which one was mine?! He didn’t even know my name, and he had never seen me before! That, right there, blew my mind.

In my letter, I had asked if I should stay with the company once they sell out, and if not, should I stay in the insurance industry. I had also asked – because there was so much unrest in South Africa with the challenges to apartheid – whether I should stay in the country.

The Rebbe began answering my questions from the bottom up. He said, “As far as staying in the country, ask the rabbi of your community. As far as the insurance business, it would be good for you to remain in the industry. As far as staying with this particular company, when you get back to South Africa, the question will answer itself.”

I was puzzled by his statement. He had said to stay in the insurance business – which was fine by me. And he said that my rabbi would be the best one to advise me whether to stay in the country. Of course, I’d heard that the Rebbe had told his emissaries in South Africa not to fear the fall of apartheid – because the political transition would be peaceful. But he didn’t answer my question about continuing my employment with this particular company.

As it turned out, the question was answered by itself, exactly as he predicted.

The company conference ended on Passover and everyone flew back on the holiday except for me. I returned home a few days later, and I was wearing a yarmulke. I had put it on for the holiday while in New York and I didn’t take it off.

When the managing director saw me, he said, “Get into my office now!” As soon as I went in, I saw that he was fuming, and I could guess why. I had not joined a part of the conference because it was held on Shabbat; I did not return with the rest of the company, because it was Passover; and here I was wearing a yarmulke. He was Jewish, and he saw me as showing him up, which infuriated him.

Reading the signs, I asked, “Are you going to fire me?” He shot back, “I sure am. Take your things and get out!”

And now I understood the Rebbe’s answer: “As far as staying with this particular company, when you get back to South Africa, this question will answer itself.”

So I left. I went out on my own as an insurance broker, and I’ve been on my own ever since, which turned out to be just fine.

A few years later, I came to see the Rebbe again – this time with my wife, Beryl, and my little daughter, Mashie.

Our turn came very late at night and, by this time, Mashie had fallen asleep. She had looked forward to this experience, constantly asking, “When are we seeing the Rebbe? When are we going to see the Rebbe?” But she couldn’t hold out; she fell asleep on Beryl’s shoulder.

The Rebbe began speaking to me in Yiddish, a language which I understood, but which Beryl didn’t. As he was talking, she was thinking, “Sam, you better remember every single word because I understand nothing.” And in that moment, the Rebbe switched to English, which just amazed her.

When we were leaving he gave us a dollar. He didn’t hand it to me; instead, he pressed a dollar into sleeping Mashie’s hand, so that, when she woke up, she’d have something to remember him by.