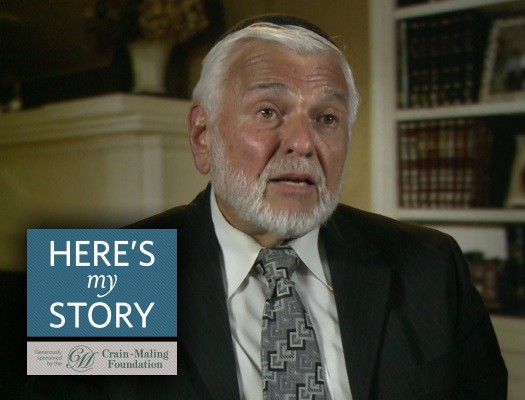 Rabbi Moshe Stern served as the rabbi of Shaarei Tefillah Congregation of Toronto for 32 years until his retirement in 2012. He was interviewed in the My Encounter Studio in Brooklyn in July of 2012.

In 1970, when my daughter was about two years old, she stuck a Q-tip into her ear and punctured a membrane, which caused a mastoid infection. We didn’t know what had happened until we saw pus coming out and realized that she was losing her hearing.

She was operated on two times, but each time the surgery failed. We felt she was getting good care at the University of Alabama Medical Center in Birmingham where we lived at the time; the doctors there were highly competent, but their efforts did not succeed. As they say in Yiddish, “S’iz nisht gegeingen – It just didn’t go.” The pus was still forming and draining from her ear. Needless to say, we were very worried.

So I decided to write to the Rebbe to ask for a blessing. A short while later, I got a call from Rabbi Leibel Groner, the Rebbe’s secretary, instructing me to check the mezuzah on the door of her bedroom. He also said that the Rebbe suggested that we consult a doctor who specialized in ear surgery down south, near where we lived. He didn’t give me a name or precise location, but said that, if I did a little research, I would find him easily.

In response, I told Rabbi Groner that I had checked every mezuzah in our house about four months ago, and they were fine. I asked if I should do all that again, or just check the one on the door of my daughter’s room. He said, “That you checked them before is not relevant. The Rebbe says to check this one mezuzah – where the child sleeps – so that’s what you have to do.”

When I got this call, it just so happened that one of the Rebbe’s emissaries – Yossi Gerlitzky, who is now a rabbi in Tel Aviv – was visiting my house. We had known each other since childhood. So I told him what Rabbi Groner had said, and we both removed the mezuzah from the door.

We took the scroll out of the case, unrolled it and were shocked to find that one of the letters in the word Shema was almost gone. The scroll reads “Shema Israel, Hashem Elokeinu, Hashem Echad – Hear O Israel, the Lord is our God, the Lord is One.” But the word HEAR was damaged!

Of course, we immediately replaced the scroll with a new one, wondering how the Rebbe could have known there was a problem with this mezuzah. Furthermore, how could the Rebbe have known that there was a doctor who specialized in ear surgery nearby?!

We did a little research as instructed and readily discovered that indeed, very close to us in Nashville, Tennessee – just a three or four hours’ drive away – was based Dr. John Shea, a Harvard-educated pioneer in ear surgery who had been honored by the Royal Society of Medicine for his innovations in reconstructive surgery of the ear.

I had never heard of him before, but what do I know – I’m a rabbi. However, I was shocked that the doctors at the University of Alabama did not refer me to him in the first place. After all, he was a world-renowned specialist, and he was based right in the next city! How could they have not known that, when the Rebbe – all the way over in Brooklyn – knew?

We went to Dr. Shea with our daughter; he did the surgery, repaired her ear, and everything turned out fine.

After that I made a point of seeking out the Rebbe’s blessings on a regular basis. Often, we would come to New York; particularly when each one of our children was about to be married.

When my daughter, whose hearing was saved thanks to the Rebbe, got engaged 26 years ago, my wife and I came to see the Rebbe. We stood in line as he was handing out dollars to encourage people to give to charity. When our turn came, I asked the Rebbe for a blessing for my daughter. The Rebbe blessed her, her groom and their forthcoming marriage. I thanked him and started walking away, when the Rebbe called me back.

He asked me, “What about blessings for your other children?” I explained that I didn’t want to take up too much of the Rebbe’s time, with so many people waiting in line.

He then taught us a lesson, which both my wife and I found profoundly moving. He said that when one child is celebrating a major event, the other children often feel left out, forgotten, and they are hurt by being ignored. “So please, make sure when you are planning this wedding, you don’t ignore your younger children.”

When she heard that, my wife started crying and, seeing her cry, I started tearing up too. The Rebbe seemed puzzled. “Why is she crying?” he asked me. I said, “She’s very moved by what the Rebbe said.” To which he responded, “Everything should go well with G-d’s blessing.”

We took his teaching to heart, and we have also shared it with everybody we know. And, from that time forward, whenever we’ve had a family celebration of any kind, we always made it a point to go overboard to include the other children.

The Rebbe was so sensitive to children’s feelings. He cared so much about the little ones. That day when he gave over this teaching remains in our memory as one of the most moving encounters we’ve ever had.