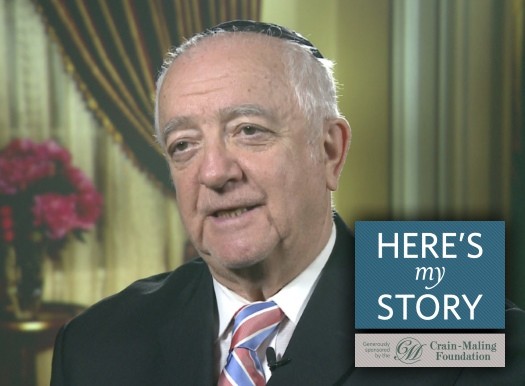 Tzvi Hersh Tsatskis is a cantor and pianist who has performed across the globe. He was interviewed in the My Encounter Studio in Brooklyn in March of 2013.

I was born on Yom Kippur in 1938, in the city of Kazan, Tatarstan, Soviet Russia, where I was educated in Torah by underground Chabad teachers. At a time when the practice of Judaism was against the law, a Chabad chasid used to come to our home to teach us the basics, despite the danger of imprisonment.

In this oppressive environment, my parents tried their best to be Torah observant. Even after the war when we moved to Moscow, where Jewish life was even harder, they took great pains to keep kosher and, against all odds, they succeeded.

I attended public school and I tried to avoid desecrating Shabbos as much as I could. Generally, this was not completely possible, though I managed to play hooky on the Jewish High Holidays. After that, in 1955, I went to university – the Moscow Conservatory of Music – to become a pianist, and I was arrested twice while trying to attend the great Moscow Choral Synagogue. I was questioned and held in jail a few days each time, but I suffered no further fallout from those incidents.

From that time on, I – along with the rest of my family – was actively trying to leave Russia. Finally, in 1970, a Chabad emissary went to the Rebbe in New York to ask for the Rebbe’s blessing that we get out. And less than a year later – at a time when this was near impossible! – we received the green light to go. As soon as we arrived in America, of course we came to see the Rebbe to express our gratitude.

That was the first time I participated in a farbrengen and saw thousands of Jews gathered together – something which was forbidden in Russia. It was amazing to hear the Rebbe speak and to see everyone so happy, singing with such joy. For me, it was an unbelievable experience.

During the farbrengen I was sitting by the door as far away from the Rebbe as you could get, and I couldn’t hear him very well from there. But even if I could have heard him, I wouldn’t have understood much.

Then, something happened – the Rebbe began to distribute wine from his cup, and I saw people lining up to receive it and say L’Chaim.

I was sitting in the back, debating with myself whether I should join them. I wanted to, but not being a Chabad chasid, I wasn’t sure if I should, until I saw the line coming to an end. And then, on an impulse, I got up and stood at the back of the line. Before long, I found myself in front of the Rebbe holding my cup. The Rebbe gave me a big smile, poured wine into my cup, and I saidL’Chaim. I started to walk away, but the Rebbe called me back. He motioned for me to come forward.

So I came back, and he gave me an even bigger smile and poured more wine into my cup. I saidL’Chaim again, and then he spoke to me in Russian: “Don’t have any more doubts.” I was so shaken that I almost fainted. Then he said, “Sing!” And I started to sing, the Passover song, “Who knows one?” except I sang it in Russian: “Ech Ti Zimlak…”

After that time, I was privileged to sing many, many times at the Rebbe’s farbrengens. And every time, it was a tremendous thing for me to do so, standing next to the Rebbe.

As I mentioned, I was educated as a musician in Russia. And there came a time when I was invited to give a concert in Manhattan – in a very large hall, the name of which I don’t remember. It was a concert of Jewish melodies for the Workmen’s Circle, a secular Jewish organization. During the first intermission, somebody approached me and asked me to take off my yarmulke. I refused to do this. And then, during the second intermission, another person came over to me – he said he was the vice-president of the organization sponsoring the concert, and his organization was very happy that I was performing for them, but they were not comfortable with my wearing a yarmulke. Would I please remove it?

I got very upset at this, and I said to him straight out, “You are the second person to come to me and ask me to take off my yarmulke. And if someone else comes, then I will not only not take it off, I will take out my tzitzis and make sure no one has any doubt that I am a Torah observant Jew.”

That put an end to that.

When I came to see the Rebbe, I told him about this upsetting incident. As I was relating the story, I said, “I was giving a concert to a Jewish audience that was not observant…”

I will never forget it.

But, of the many times that I saw the Rebbe, there is one story involving my daughter that stands out in my mind.

Let me preface: I once brought my son to a farbrengen but I did not bring my daughter. And right away the Rebbe asked, “Where is she? Where is Tanya?”

When my son heard the Rebbe asking for Tanya, he ran to a make a call to my wife. She brought her right over – Tanya was then just a little girl – and when the Rebbe saw her, he waved to her. After that, I would bring her to Chabad events on many occasions.

One time the Rebbe was distributing wine at the end of a festival, and many of the yeshivastudents were singing chasidic songs. Standing on the stage not far from the Rebbe, I led a song and Tanya, who was seven or eight years old at the time, began to sing along. When she did that, the Rebbe’s secretary indicated to me that she should stop, as the men present could not listen to the voice of a girl singing.

The Rebbe noticed this and, concerned that she might be upset, put down his cup of wine, turned to her and motioned to her to clap. He was encouraging her to participate, and he did this for some time. I was amazed! That the Rebbe should consider the feelings of a child and that he should take so much trouble to engage her!

He had a tremendous love for every Jew and every person. In fact, what he felt was beyond love – it was a feeling of unity. He united us with him and with G-d. I experienced this feeling, and I will never forget it.