« Investigators: Boro Park Explosion May Have Been Intentional
Terror Continues: Another 3 Stabbing Attacks in Israel » 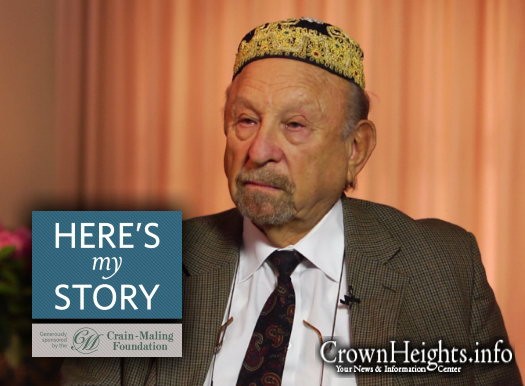 Joe Davidovitz is a philanthropist and property developer in Johannesburg, South Africa. He was interviewed by JEM’s My Encounter with the Rebbe project in his home in August of 2014.

My name is Joe Davidovitz. I am an architect from South Africa. When I first set up my practice in Johannesburg as a young man, I did very well and I built it up quickly – in three or four years – into a massive business. At the height of my success, I was doing property development and employing 1,500 people.

But then my business started to wobble. This was largely due to my inexperience. I had borrowed money short and invested long. This was a good way to get into trouble. When South Africa’s economy started reeling, there was a tremendous downturn in property values, and raising money for development became impossible.

Around this time – I believe it was in 1974 – I heard good things about a young Chabad rabbi who had come to South Africa. This was Rabbi Mendel Lipskar, and I went to hear him speak.

The time I went he was speaking about the Exodus from Egypt and what happened when the Jews arrived at the Red Sea and realized they were trapped. That struck a chord with me because I was in exactly the same place; I was at the sea with no future in front of me, with my business about to collapse.

Rabbi Lipskar’s father was there also – he was a really wise man, a very fine man – and I mentioned my troubles to him. He said, “You should go to New York and tell all this to the Rebbe.”

I said, “I’m not going to New York to speak to someone about property problems in South Africa.”

He said, “I’m telling you the Rebbe is a special person. Go and talk to him, what harm can it do?”

The truth was that I had nothing left to lose at that point. My business had no chance of surviving, so I decided to go to New York and see what would happen.

I arrived at this funny place in Brooklyn with guys walking around with long beards and black hats. I looked around and said to myself, “Oh my, what have I fallen into here?”

Before the audience, I met with the Rebbe’s secretary, Rabbi Yudel Krinsky, who told me how to behave before the Rebbe. He told me to write down my requests on paper, but when he saw my list – I had about ten requests on it – he said, “Sorry, the Rebbe’s a very busy man. Write down the two most important things, and that’s what you’ll talk about.” So that’s what I did. I chopped my list down to two.

When I was ushered into the Rebbe’s office, I saw there an old man sitting at a table. No carpets, no curtains, no nothing. He was sitting there looking at me with these blue eyes, and suddenly a peculiar feeling came over me. My knees felt weak and I began shaking. I had never ever met a human being that I was in awe of.

He said to me, “Shalom Aleichem,” invited me to sit down and took my piece of paper with my two requests on it. He then began asking me about South Africa and about my business, and I was just amazed. He was supposed to be a rabbi, and what does a rabbi know about property? But here he was, talking to me about the most complicated financial maneuverings. I couldn’t believe it. He knew everything about financing. He asked if I’d tried getting this kind of loan or that kind of loan. And he mentioned all sorts of mechanisms to stave off the collapse of my business.

Anyway, after he discussed the first and second requests on my list, he proceeded to the third and fourth. But I had handed in only two! I thought that maybe Rabbi Krinsky had given him my original list and later I asked him about it, but he said, “No, I’d never have had the cheek to do a thing like that!”

How did the Rebbe know about my other issues? I have no idea.

Of course, my number one item had to do with the business. I had asked for a blessing that it wouldn’t go under. But he didn’t give me that blessing. Instead, he gave me a blessing that my daughter should do charitable works.

You know, the interesting thing is that this is when I got involved with Chabad in earnest, and I started doing charitable works – and my daughter did as well, of course. And when I came to see the Rebbe a second time, I brought her along.

That second time, when we were waiting our turn, a guy came out looking completely stunned. I asked him his story and what he told me was remarkable. He said, “My business has been brokering insurance companies. I’d find a small insurance company for sale, and I’d bring the deal to my client, a large insurance company, they’d buy it and I’d get a commission. I’d been doing this for a number of years when I decided that I could do what they were doing and make their kind of money. So I found a small company I wanted to buy, but when they learned what I was about to do, they were not happy. They didn’t want me competing with them. I didn’t know what to do, and this is when my friend told me I should come see the Rebbe. I’m not religious, but my friend was very persuasive and I agreed.

“The Rebbe said to me, ‘I’ll tell you what we’re going to do. We are going to become partners, and you will give me ten percent, which will go to charity.’ I was skeptical, but having promised my friend that I would do what the Rebbe said, I agreed. As it turned out, my client – the big company – wanted to buy the small company that I’d wanted to buy and they offered me double the usual commission. I wanted to jump on it, but I said, ‘I have to consult my partner.’

“I came to see the Rebbe, but he told me, ‘No, we’re not selling. Not unless they give you eight times that amount.’ And – what do you know – they went for it!”

Even after giving ten percent to the Rebbe’s institutions, his commission was still huge compared to the money he usually made. He couldn’t understand how the Rebbe sitting in such a humble office in Brooklyn should have such vast business knowledge and such a keen sense of finances.

His experience echoed mine. And seeing the Rebbe for the second time was no less amazing. Just like the first time, it was indescribable. I’ve never had such an experience with anybody. Once only at the Western Wall in Jerusalem, but never with another human being.

When I was with him – I don’t know how else to put it – I felt something beyond this world. Because in this world, such goodness, such empathy as he had do not exist. He had the ability to connect so completely with another human being. And I am grateful that for those few moments when he connected with me.

« Investigators: Boro Park Explosion May Have Been Intentional
Terror Continues: Another 3 Stabbing Attacks in Israel »