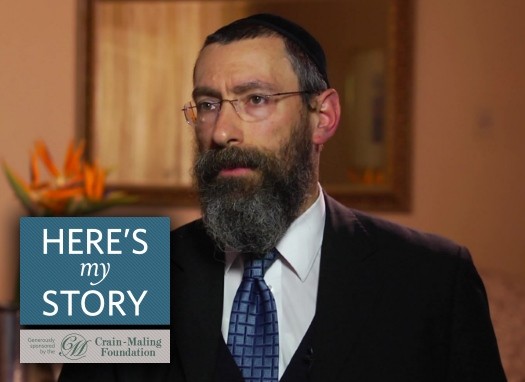 Rabbi Pesach Fishman is presently the educational director of Torah Academy Boys High School in Johannesburg, South Africa. He was interviewed by JEM’s My Encounter with the Rebbe project in August of 2014.

My name is Pesach Fishman. Since 1988, I have served as an emissary of the Rebbe in South Africa. At first I was assigned to be the rabbi of the Jewish community of Bloemfontein, a provincial city about 400 kilometers from Johannesburg. While there, I also served the Jews in Maseru, the capital of Lesotho, which is a separate country from South Africa, but is only about a two-hour drive from Bloemfontein.

It has always amazed me how far the Rebbe’s influence reached. During the first Gulf War in 1990, I remember receiving phone calls from so many far-flung Jews. One called from the middle of Lesotho where there were not even ten Jews – counting men, women and children – wanting to know if it was true that the Rebbe said that Israel would be safe. Another caller lived on a farm 200 kilometers from where I was, and at least 50 kilometers from the nearest Jew – but he, too, heard that the Rebbe said Israel would be safe and wanted to know more.

To me, this was an indication that the Rebbe’s influence was not confined to major Jewish centers, but extended to every little town. All these people had somehow heard what the Rebbe had to say, and were encouraged and inspired by it.

While I was stationed in Bloemfontein, just before Rosh Hashana of  1989, our son Yosef Yitzchak was born. But, unfortunately, he contracted some type of infection in the hospital and had to be placed in intensive care. He was there for eight days, and he was not improving.

I was hesitant to write to the Rebbe. I didn’t want to take up the Rebbe’s precious time, and I felt that the doctors were doing their best. G-d willing, the situation would resolve itself in its own good time. My wife, however, was insistent that we should write to the Rebbe, so we did.

We didn’t hear back immediately. In those days, we used faxes, as this was before e-mail and communications were not what they are today. But apparently we didn’t need to receive the Rebbe’s written response. The response proved much more vivid. The morning after we wrote the letter, when my wife and I walked into the hospital, the nurse greeted us with these exact words: “A miracle happened here last night! You can take your baby home today.”

Yosef Yitzchak was fine! And thanks to G-d and thanks to the Rebbe’s blessing, we had his bris during Sukkot.

There is one more story that I would like to relate, which occurred before I was sent to South Africa as the Rebbe’s emissary, when I was still a yeshiva student. It happened on one particular Simchas Torah at the Chabad Headquarters at 770 Eastern Parkway in Crown Heights.

The year was 1980, and the Rebbe had just founded Tzivos Hashem, the children’s “Army of G-d” – the purpose of which was to bring children closer to Torah. What he created was absolutely revolutionary. Usually, great personages are not known to interact with small children, and even those who do generally have only sporadic interest. But the Rebbe’s interest was ongoing. He spoke about this project a great deal – many talks that he gave were focused on it. There were also Tzivos Hashem rallies, everything directed with special care by the Rebbe. (This project continues today with many, many “soldiers” in the Rebbe’s army.)

But, quite to my surprise and to the surprise of everyone there, suddenly a call went out that all boys of pre-Bar Mitzvah age should come in for a Hakafah.

Now, you have to picture 770 during Hakafos. Although it is a large shul, it could barely hold the thousands – perhaps as many as eight thousand people – who were there. The place was packed like a sardine can.

When the call went out for the boys to come up for a Hakafah, suddenly all of these little boys emerged from under the tables and benches from where they had been watching the Rebbe. Because the crowd was so thick, some of them were passed hand-to-hand over people’s heads.

It was a tremendous image.

I remember that we sang Rabbi Levi Yitzchak’s Hakafos Niggun, as the Rebbe – holding his small Torah scroll, which came from the famous printers of Slavita – danced with the children. The entire platform was packed with these little boys, and many of them were reaching up to kiss the Torah, which was very moving.

The Rebbe had a rather solemn expression, but he encouraged the singing in the shul by waving the Torah in a circular motion, as a sea of little white shirts – these little boys – surrounded him. Beyond them, one saw a sea of black jackets of the yeshiva students sitting up on the bleachers that went up practically to the ceiling. It was a tremendous sight and a tremendously electric Hakafah.

It wasn’t difficult to envision that the angels had come down right then from above. It was such united joy that emanated from there.

I had a front-row seat for this event because I was only two or three rows away from the center, so I could see everything absolutely clearly as it was occurring. This special memory of Simchas Torah with the Rebbe will be with me for the rest of my life.