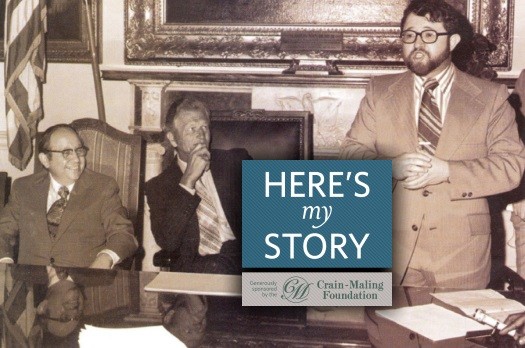 Here’s My Story: The Maccabees

Mrs. Rose Schrage was the businesses manager of the Crown Heights Board of Education for 30 years. She was interviewed by JEM’s My Encounter with the Rebbe project in her home in Brooklyn in October of 2010.

My husband, Rabbi Samuel (Shmuel) Schrage, was a community activist in Brooklyn in the 1960s and 1970s.

He became involved because yeshiva boys in Crown Heights were being beaten up by gangs coming in from Bedford Stuyvesant, and a Jewish woman was attacked by a knife-wielding man in her own home. My husband went to ask for police protection from the Mayor, who said there was not enough police to go around. And that is when my husband started the Maccabees, a neighborhood patrol group, which became quite famous and which was written up in The New York Times.

The Maccabees, most of them chasidic Jews, rode around Crown Heights six to a car, equipped with nothing more than radios and large flashlights. If they saw an incident, they alerted the police and aided the victim until the authorities came.

Still, my husband received a lot of criticism at the time. Mainly this was because the idea of neighborhood watchmen was so original, and some people didn’t understand it – they thought the volunteers were vigilantes who took the law into their own hands. A lot of this criticism came from local Jews.

The Rebbe said to him, “Don’t disband – make it stronger!”

My husband followed the Rebbe’s advice, and eventually he became the head of New York City’s Neighborhood Action Program. He also got involved in politics. Mayor John Lindsay appointed him to the New York City Youth Board, and Mayor Abraham Beame retained him in that position.

Whether in politics or his personal life, Shmuel did nothing without a blessing from the Rebbe. When I had my first baby – which was a complicated pregnancy and I feared for my life – Shmuel went to the Rebbe and asked for a blessing that everything should go well. Thank G-d, it did. But in the excitement, Shmuel forgot to call the Rebbe to tell him that our son was born and everything was fine. So the Rebbe had his secretary call and ask if I was okay.

I was very impressed because the Rebbe has so many people on his head, and yet he was thinking about me, which just goes to show that he kept every individual in mind. Here my husband had only one call to make, but he forgot because he was so excited about the new baby. But the Rebbe, who had so much more to think about, did remember!

This was what always impressed me about the Rebbe – besides his greatness – his human quality.

With time, my husband became quite famous for his activism – he was called Mr. Crime Fighter – and he became a kind of folk hero. Because of this, many politicians who were running for office wanted his support. Of course, they also wanted the Rebbe’s endorsement and blessing.

I remember when Robert (Bobby) Kennedy was running for President. He contacted Shmuel for his endorsement and then Shmuel took him to see the Rebbe. For the occasion, Shmuel wore the gold cufflinks I had given him as a wedding present, but don’t you know, in the midst of all the excitement, he lost one. I was very upset, and Bobby Kennedy got down on all-fours and crawled around the floor until he found it.

At the time, Kennedy asked Shmuel, “Is there something I can do for you?” And, of course, Shmuel asked the Rebbe, who said, “Yes, there is something he can do. There are two Jews sitting in jail in the Soviet Union for spreading Judaism. If he can get them out that would be a great thing.”

Kennedy promised to do it. But after a couple of weeks, he called Shmuel to say, “I have good news and bad news. The good news is I can get them out of Russia. The bad news is I can’t get them into the United States.”

This was unbelievable – the former US Attorney General could get two Jews released from Soviet Russia, but he couldn’t get them admitted into the US because of the anti-Semitism of some people in the US State Department. My husband refused to accept that answer. He called the State Department, threatened them with a media campaign, and they buckled under – the two Jews were allowed in.

Bobby Kennedy was not the only non-Jew who met the Rebbe through my husband. Another was Ed Joyce, who used to have a famous talk show – “The Talk of New York” – before he became president of CBS News.

My husband later told me that the interview lasted two hours, and that Ed Joyce asked the Rebbe, “If the Jews are the Chosen People, what role is there for someone like me who is not Jewish?

The Rebbe answered, “Everyone has an individual role, and we can’t do our part unless others do their part. Just like a body and all its limbs. If you want to go forward and take something, your feet have to take you over to the object, your hands have to pick it up, and so on. It doesn’t work any other way. You can’t leave your feet here and your hands there. This is the way the world functions too, and every person has a reason for which he was created. Each one has to do his part so the other one can do his part.”

Ed Joyce was very impressed with that answer; so impressed that he wanted his wife and children to meet the Rebbe. I believe this happened at a farbrengen; I do believe they met him.

In 1977, my husband had a heart attack, and he passed away at age 44. This happened right before my son’s Bar Mitzvah, which had to be postponed.

Thirty days after his passing – after the shloshim – I went with my boys to see the Rebbe. My sons knew how distraught I was, so my older one piped up, “Rebbe, please give my mother a blessing first. She needs it more.” And it was true – I needed it. I was in shock over the whole thing.

The Rebbe said, “If you listen to your mother, that will be the biggest blessing she could get.” This meant so much to me because I was so worried how I would raise them all by myself.

I looked at the Rebbe, and his eyes were filled with such kindness that I opened up and started talking to him as if he were my father. The Rebbe kept me there a long time, listening to me and offering advice. I went into his office in a terrible state, but I went out a different person – totally different, and much calmer.

And after that, at every farbrengen that my son attended, the Rebbe would give him a piece of cake or a little bit of wine for me. He would say to my son, “This is for your mother.” It was so reassuring to know that I was not alone in the world, that the Rebbe always had me in mind and never forgot the widow.